Disclaimer: This post is not my attempt to make a blanket, political statement about capitalism.  Instead, this post is an attempt to illustrate the institutional systems role in perpetuating poverty, which is stimulated by globalization.  As a result, there are structures put in place that advance the middle and upper classes while inevitably hindering the lower class. 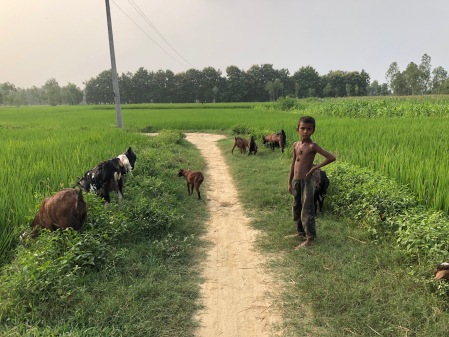 This picture depicts the common life of a child in the rural area of India.  Despite his isolation from the city, globalization contributes heavily to his life.

Starbucks — a franchise recognized across the world.  It’s a caffeine boost.  It’s a free wifi hotspot.  It’s a familiar logo of home.  Because Starbucks is such a recognizable part of many people’s lives across the world, it is an ideal artifact to study in relation to globalization.  The local is the global and the global is the local, and the Starbucks franchise fits into both the interdependent categories perfectly.

According to a news report by CNN, the first Starbucks cafe in India opened in 2012.  This change to the environment and culture of India has its foundation in globalization, utilizing the ever connectedness of countries, corporations, and markets.  India’s new economic plan in the 1990s — encompassing liberalization, privatization, and globalization — paved the way for the multi-billion dollar company to open its doors within India’s borders.  Studying the key fundamentals of the larger corporation and its individual cafes will help understand the structural oppression that is shaped to advance the health of only a portion of India.

In order to analyze the effect of this artifact further, Starbucks industry’s source must be identified.  The headquarters are located in the United States, in the state of Washington.  There are over 27,000 Starbucks locations across the globe; more than half of these locations are in the United States.  Comparatively, there are around 100 Starbucks cafe locations in India.  The chain store began in the western hemisphere and migrated to India 41 years later.  Nonetheless, this flow of business, capital, and frankly, Starbucks coffee is relatively new to the area — considering its first store opened only 6 years ago.  The chain, however, quickly spread.  For each year since the opening of the first Starbucks in India, another 17 stores were opened annually.

Additionally, the business’ motivation for spreading is a key element to its global flow.  This motivation is fundamental to understanding its health effect on the overall population of India.  For example, the first Indian Starbucks was opened in Mumbai, a location specifically and strategically chosen by the corporation.  Mumbai was discussed in class as a relatively wealthy area.  It is a movie producing hotspot.  It is a tourist destination.  These aspects of the city point to a particular lifestyle — a lifestyle of luxury and expense.  The citizens of Mumbai have a disposable income that can be spent on breakfast sandwiches and overpriced coffee.  Starbucks chose Mumbai as a location that would bring in revenue.  Mumbai chose Starbucks as a business that would benefit the city.  The global is interacting with the local and vice versa, each contributing to the worldwide spread of people, goods, and services.

In addition, the meticulous placement of Starbucks is emphasized by my personal experience in India.  Our homestay is in the wealthy neighborhood of Greater Kailash; and down the street is a Starbucks.  People come to reap the benefits of clean water, free wifi, a sewage system, and nutritious food at the cafe.  These are basic elements of the Starbucks franchise.  Therefore, wherever a Starbucks is built, these factors of wellbeing are built into the neighborhood as well.

However, this strategic and revenue maximizing business plan further stretches the gap of social capital between the rich and the poor.  The rich live in areas like Greater Kailesh and Mumbai which have stores like Starbucks.  The poor live in areas where Starbucks and similar businesses would refuse to open a location.  To demonstrate the contrast, two illustrations must be drawn.

Example two: This information is gathered from our class’ recent visit to a New Delhi “slum”.  Within the group of small and connected houses, I noticed two places the families of the particular neighborhood could purchase food.  Both places were small snack stands.  The vendors provided bagged food — processed and high caloric.  No kitchen for fresh meals.  No bathroom with running water.  No wifi to help complete homework.  No hiring opportunities.  The food “cafe” of this neighborhood is merely a provider of unhealthy junk food.  It provides no additional advancements to the community.

With this stark contrast in mind, Starbucks in India — a product of globalization — provides resources that advance life for only middle to upper class individuals.  Therefore, the artifact of Starbucks demonstrates a motif of the larger problem of systemic oppression.  For those living in low-income neighborhoods are not able to reap the benefits of a Starbucks cafe because they don’t have access to one.  Outsiders seem to be ignorant of the institutional oppression that creates this perpetuation of poverty.  It’s a cycle with outside influences, influences that flow from the home country and the entire world.

This entry was posted on Thursday, September 13th, 2018 at 9:55 am and is filed under Brooke Goes Global, Fall 2018. You can follow any responses to this entry through the RSS 2.0 feed. You can leave a response, or trackback from your own site.