I have been on my abroad trip for 5 weeks and in India for 3 weeks.  I have told you ample about my classes and experiential learning.  However, I have dropped the ball on providing information about my touristy, free-time experiences.  Last weekend, IHP, our abroad program, gave us the opportunity to have a travel weekend.  A large group of students decided to go to Jaipur, a popular city in Northern India.

From New Delhi, we headed on a 5 hour train ride to the city.  After many hours of staring at the “touristy Americans” throughout our transportation experience, we finally arrived in the city.  That evening we arrived at our hotel, the Anuraag Villa.  Consider this post to be a Yelp review for the Villa.  Every employee was kind and helpful, allowing their guests to make the most of their visit.  When we stepped inside the hotel, you were transported to a time when India was under British rule.  British colonialism seemed to be the decor theme of the hotel with their light blue bedroom walls, with adorned doors and large sliding locks.  Also, helpful tip: hotels are deemed some of the best places to eat authentic Indian food.  Professional chefs are hired by hotels, and because hotels cater to tourists, the food’s cleaning and cooking process is safe for a foreigner to enjoy.  Anyways, back to my Yelp review.  I certainly got the most bang for my buck at this hotel.  I shared a room with another girl in the program, and for two nights we paid $1,300 rupees.  This in terms of USD comes to about $13 per person for both nights.  It was not the most extravagant hotel I have ever been to, but it certainly contributed to my exciting time in Jaipur. 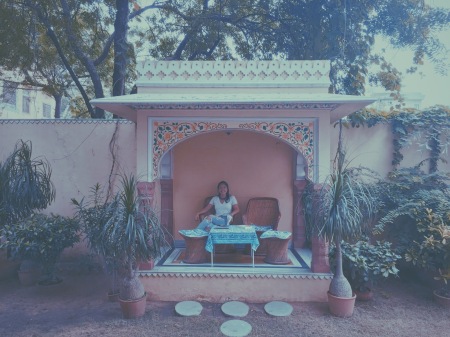 Me eating breakfast at the Anuraag Villa, enjoying the feeling of eating like a queen in India

Unfortunately, our time in Jaipur was too short to see everything the city had to offer, but I certainly saw a lot over the two days.  Our first stop on Saturday, was to an elephant farm in the outskirts of the city.  Our group was very concerned about the well-being of the elephants, but we were assured by the staff and reviews of the farm that the animals were treated humanely.  We had the opportunity to meet six different Asian elephants, each with their own individual handler.  Elephants are some of the smartest creatures in the world.  In the four hours we were with the elephants, we are able to make such a strong impression on them that if we came back three years later, they would remember us.  It was such a fascinating and invigorating moment to spend time with such large, yet gentle animals.

After, we took off to the historical and iconic city of the Pink City.  The rumors are true.  Every structure within the boundaries of the city is pink.  Shops and vendors align the streets with colorful food and clothing.  The rainy weather caused a thin layer of mud to form on every inch of every sidewalk.  The bumper to bumper traffic caused a symphony of car horns.  And on occasion, a camel or an elephant made an appearance as a form of transportation.  We stopped for lunch at a rooftop restaurant.  We were able to eat some amazing food while enjoying some amazing views of the city.  The juxtaposition of the rolling hills against the building structures of the city created a sight that took my breath away.  Is there a better location to build a city than in the valley of a hill?

The beautiful view from our rooftop restaurant

The Hawa Mahal in the Pink City

We spent the evening at the Amber Fort light and sound show.  The hour long performance gave a detailed history of the royal fort through narration, lights, and song.  The Amber Fort sits at the top of a hill, with a view of the city below.  With the mountain breeze sending a chill down your spine, it was a refreshing night to a long, tiresome, and hot week in New Delhi. 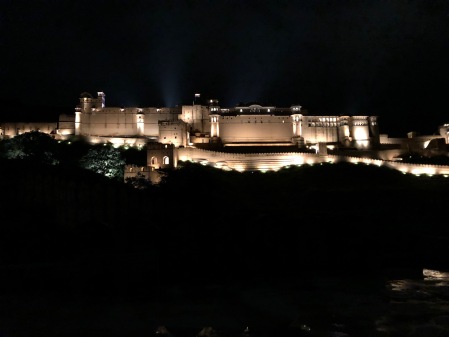 Amber Fort lit up at night

And to end the weekend, we spent Sunday morning at two historical sites including Jantar Mantar and the City Palace.  Jantar Mantar is a culmination of thousand year old sun dials that are able to tell the accurate calendar day and time of day based on the light from the “universe’s goddesses” — better known as the sun and the moon.  The City Palace constituted incredibly detailed buildings that showcased textiles, a royal and political meeting space, and chandeliers triple my size.  I appreciated the time we were given to experience a different part of India.

PICTURE 7, 8, 9: The above three pictures depict the City Palace, a structure with exquisite detailing and architecture.

This entry was posted on Friday, September 21st, 2018 at 10:55 am and is filed under Brooke Goes Global, Fall 2018. You can follow any responses to this entry through the RSS 2.0 feed. You can leave a response, or trackback from your own site.