Even though I barely heard about it in the US, International Women’s Day is a big deal here in Mongolia. Everyone from my host family to the SIT staff kept reminding me of the “big day”. Up to a week before the “big day”, I saw many people buying roses, cakes, and fancy chocolates! The way Mongolians celebrate Women’s Day seems to be a combination of a Mother’s Day and Valentine’s Day in the US.

My host sister Tuugi had a school concert in the outskirts of the city on Women’s Day, so our family headed out there for most of the day. It was great to get out of the city for the first time! It’s amazing how a short drive outside of the city can drastically alter the landscape. The drive gave me a taste of what I will get to see later in the semester during our excursions and nomadic homestay! I must’ve been oohing and ahhing a lot because after a while my host brothers started pointing at random things and shouting “WOW!” 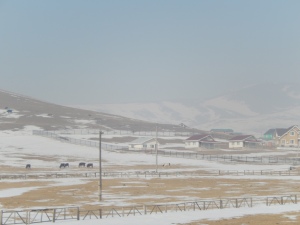 One of the many scenic landscapes I witnessed

Once we got to the concert, we were so late that we only got to see Tuugi perform for a few seconds. It was kind of like a school-wide talent show, and we missed almost all of her portion. Thankfully, the rest of the show was interesting, even though I had no clue what was going on. There was an array of acts, and it was interesting to see what was acceptable in the school environment. For example, there was a student-made video that humorously portrayed a middle-school student that came in to shoot/beat up weak students. There’s no way that that would be acceptable in the US, but it got a lot of laughs here. Another surprise was when a group of students performed traditional Irish-step dancing. There was also a fashion show that had an interesting mix of traditional Mongolian accessories with western-style clothing. I especially enjoyed the performances that included traditional Mongolian instruments. 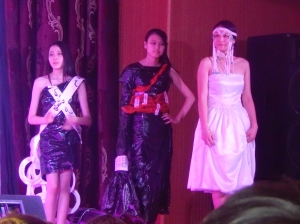 To the far right is a student wearing a traditional headband with her western-style dress.

After the concert, my host mother pulled over to the side of the road to give us the chance to run around and enjoy the fresh air outside of the city! It was great to play outside with Temuujin and Tulga for a bit- they were especially excited by the jet we saw in the sky.

Chasing after the jet

Once we got home, we celebrated Women’s Day together. After dinner, we ate cake and passed out the candy we had bought for each other.  I think that when I look back at this picture, I’ll always remember what an exhausting, yet wonderful day it was.

I got Temuujin to take a picture of all the women, and we even got Undral to hysterically laugh at exactly the right moment.

This entry was posted on Monday, March 17th, 2014 at 11:26 am and is filed under Kimberlee in Mongolia, Spring 2014. You can follow any responses to this entry through the RSS 2.0 feed. You can leave a response, or trackback from your own site.