Our group had an interesting meeting with the head of Zorig Foundation in Ulaanbaatar. Zorig was a leader of the Democratic Revolution in Mongolia in the early 1990’s, and was an influential politician until he was assassinated. A main goal of the foundation is to focus on community development in Ulaanbaatar, and the head of the foundation lectured to us about the process of urbanization in Mongolia. 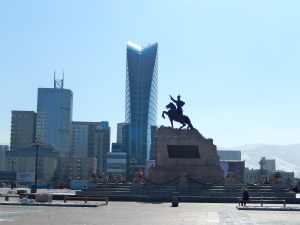 Sükhbaatar Square at the center of Mongolia. These are some of the many new structures built in the city.

One of the most interesting aspects of the lecture was when we discussed the concept of “community” in Mongolia. As it’s a traditionally nomadic culture, there’s no word for “community” in the Mongolian language. Therefore, the concept of cities and Ulaanbaatar itself is a modern invention to Mongolians. Only about 2 generations of Mongolians have lived in Ulaanbaatar so far. The newness of the city and communities is important to keep in mind when discussing the issues within Ulaanbaatar.

Currently, about one-third of Mongolia’s population is nomadic, but about 30,000 people are moving into the city every year. The population of Ulaanbaatar has doubled since the 1990’s, and the city is overwhelmed with the sudden influx of people. Many of these new people are slightly mislead to believe that Ulaanbaatar is a city of multiple opportunities. Although there are many vacancies in employment, they require high-level degrees that formerly nomadic people aren’t often qualified for.

Many of these formerly nomadic families move into the “ger districts” on the outskirts of the city. In general, ger districts are the most vulnerable communities within Ulaanbaatar. Gers are the traditional homes that Mongolian nomads live in- imagine a sturdy, round “tent” with one room that everyone shares. It’s designed to disassemble quickly, and not so much to be connected to central heating or electricity. Therefore, many people in these ger districts have no access to running water and central heating, and generally have worse quality of life compared to those within the city. 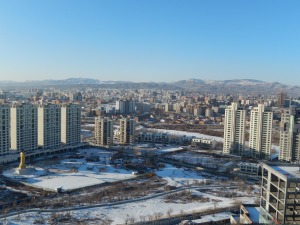 If you look closely in the background, you should be able to see the ger districts on the outskirts of the city.

Ulaanbaatar is the coldest capital in the world, and is also generally regarded as the second most polluted city. At first this may not seem directly connected, but it’s almost entirely caused by people heating their homes, most specifically in the ger districts. Many people heat their homes with coal because it’s abundant and cheap. This is the main reason why they use coal to heat their homes, and have therefore contributed significantly to the pollution of the city. Pollution is considered to be of the worst issues that Ulaanbaatar faces, and the destruction of the environment is a main theme in my SIT program.

This entry was posted on Friday, March 7th, 2014 at 2:06 pm and is filed under Kimberlee in Mongolia, Spring 2014. You can follow any responses to this entry through the RSS 2.0 feed. You can leave a response, or trackback from your own site.