So here at UCD we get two whole weeks off for spring break (or mid-term as they call it)!  We got off the weeks of March 10 and 17.  So, the first week I traveled to see my parents in southern France, as they are renting an apartment for two months in the city of Aix-en-Provence.

On Friday, I flew from Dublin to Carcassonne (a town in central France) to meet my parents and we drove three hours to visit the city of Marseille.  Here, we walked around the port and saw some beautiful areas of the city, but our main reason being there was to see my first European soccer match, Marseille vs. Nice.  Marseille’s stadium was stunning with a capacity of around 60,000.  It was probably the largest stadium I have been in.  The match was an intense one but Marseille ended up losing 1-0 to a Nice free kick in the second half.  After a long day of traveling, I got back to my parents’ apartment around midnight.

On Saturday, we explored the city where my parents are staying, Aix-en-Provence.  I had been there a couple of times, but it was neat to be there as a “local” instead of a tourist and going back to an apartment instead of a hotel.  We explored the many squares and an enormous market that was going on throughout the day.  We also walked down the Cours Mirabeau, the large street in the middle of the city lined by trees.  Another noteworthy site was the gardens in the Pavillon Vendome.  For dinner, we had great Vietnamese food.

We went to the Musee Granet, the main museum in the city, on Sunday.  It had paintings by famous painters such as Cezanne and Picasso.  It had a variety of historical objects too, from art to sculptures.  The museum is in a beautiful historic building.  We ended up visiting a different building across the city that is also associated with this museum that had even more pieces of art and a great deal of Picasso paintings.

On Monday, we went to Nice, a large city right on the Mediterranean Sea.  It is an absolutely beautiful city with breathtaking views.  We walked around in the historic part of Nice (Vieux Nice) and had a great lunch in a square overlooking a church.  After lunch, we walked up to a park above the city that had amazing views of the port of Nice, sea, and historic Nice.  It was great to be able to see the whole city.  After this, we walked along the sea and the famous Promenade des Anglais before going to the Cours Saleya (a humongous market with many things from food to paintings).  We left Nice and got back to Aix-en-Provence around dinnertime.  At that time, we went to get some falafel, as falafel is one of my favorite foods!  It was a great falafel sandwich. 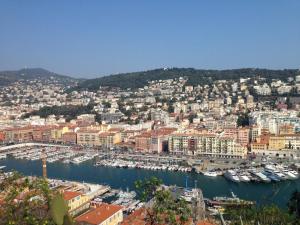 The beautiful port of the city of Nice

Tuesday, we stayed in Aix-en-Provence and explored some other attractions.  In the morning, we visited the Atelier Cezanne, the gallery where painter Paul Cezzane painted many of his paintings.  It was amazing seeing how similar this gallery looked to how it was when Cezanne was alive.  The old building must require a fair amount of maintenance.  After this, we had a great picnic lunch in the garden near his gallery, where Cezanne painted some of his famous paintings of Mount St. Victoire.  It was surreal being able to enjoy a traditional French picnic of a baguette and goat cheese while being able to take the serene landscape and the same mountains that Cezanne painted.  After this, we had a relaxing afternoon and had a Turkish dinner; I had lamb.

We traveled to other cities and towns in Provence (a region of southern France) on Wednesday.  First, we saw the hospital where Vincent Van Gogh spent some of his later years when he was experiencing emotional and mental duress.  After this, we went to the town of Saint Remy de Provence.  It is a classical French town with beautiful buildings, squares, and fountains all around the older part of the town.  There was a large market going on, where I had a fantastic sausage sandwich.  I also learned of a great drink known as a “Tango,” which is beer with grenadine syrup, quite a refreshing and delicious beverage.  After Saint Remy, we traveled to the larger city of Arles.  Arles is a very Roman city with a famous Arena and Antique Theater.  There were so many police officers around and we soon found out why; there was some sort of protest by farmers on a major street in Arles.  There were no less than 300 sheep in the streets!  After seeing this, it become a challenge getting around the streets of Arles, as the cops had many streets blocked off because of the protest going on.  Thankfully we got out of the city without encountering too much traffic and got back to Aix en Provence around dinnertime.  I had an amazing pizza (French pizzas are so tasty) with chorizo.

Thursday was my last full day in France.  We traveled to Cassis, a town on the Mediterranean that gets jammed with tourists in the summer, but was quite peaceful the day we went.  It was a beautiful town with a port and breathtaking scenery all around.  We went on a boat tour of the calanques (inlets near Cassis with amazing rocky structures; they are steep-sided valleys).  These were great to see and the boat tour went all the way into the outlets for us to see the beauty of these rocky structures.  After this, we walked around the port and headed back to my parent’s apartment.  For my last meal, I had a crepe dinner, which was a crepe with beef, crème fraiche, and onions, which was really delicious, as well as a dessert crepe which had apple and sugar.  We walked around the city of Aix en Provence for our last night to admire the beauty one last time.

A calanque, an inlet with towering rocky cliffs

Friday, I left to go back to Dublin and got back around 3:00 pm to meet up with my friends who were visiting from Edinburgh.  The next blog post will cover the fun St. Patrick’s Day Weekend!

Overall, it was a great week seeing my parents after not being able to see them for two months.  The awesome weather of highs in the mid 60s (I wore short sleeves every day) combined with the destinations that we visited and tasty food that I was able to eat contributed to one of the best weeks of my study abroad semester yet.

This entry was posted on Friday, March 21st, 2014 at 1:07 pm and is filed under Austen in Ireland, Spring 2014. You can follow any responses to this entry through the RSS 2.0 feed. You can leave a response, or trackback from your own site.