As I mentioned in my last post, the past week was full of celebrations in honor of Ganesh’s birthday, called Ganesh Chaturthi. People in India celebrate by putting up statues of Ganesh in their homes or on the road and do pooja (ritual) around the Ganesh every day for anywhere from 3 to 11 days, depending on different traditions. At the end of the week, they put the Ganesh statues in water for Immersion, symbolizing Ganesh’s journey home to heaven. Because everyone puts the Ganesh statues in natural bodies of water during this holiday, it has been a huge source of pollution that adds to the issue of clean water in India. Recently, people have started using clay statuettes that naturally dissolve in the water, but many plastic and painted statues are still used every year. In Chennai, when we visited the temple to make an offering to Ganesh, we saw men making the clay Ganesh statuettes on the street for people to buy instead.

As soon as we got home from our Chennai trip on Monday night, the weeklong celebration began in full swing in our apartment building. While we were in Chennai, our host mom, Nivedita, and some of the other women in the building had put up a pandal, similar to a shrine, that included a large stage, elaborate decorations, and a 4-foot tall Ganesh statue in the car garage beneath our building, colorfully decorated with flowers and other small statuettes. Every night for five nights, all of the families in the apartment building (about 65 people in total) would gather around the pandal for pooja, singing, games, and dinner.

First, around 8 p.m., all the women would sit in a circle in front of Ganesh and chant Vedic mantras together. Then, a pujari would arrive and begin the formal ritual by chanting loudly, apparently instructing us to do certain actions, although I could never understand what he was saying. Instead, I would mimic the actions of the people around me, throwing rice on the Ganesh, drinking coconut water, spinning around three times to the right, and many other things. Although I never fully understood what was going on, burning incense, breaking coconuts, and listing the names of our neighbors were among the usual things done during the pooja. After the pujaris were finished, we would begin playing games and singing. Most of the children – and there were a lot of them – were very interested in Jennie and me and wanted to talk and play with us constantly. During the Friday night pooja, the families wanted to do something special so Jennie, Prerna and I sang a Taylor Swift song and played guitar. It turns out Taylor Swift is just as popular here as she is in the US, if not more!

Finally, around 9 or 10 p.m., we started dinner, which was prepared by some of the women in the apartment. It always included an enormous vat of rice, lots of fried snacks, and a dessert. The dessert was the most important part of the meal because Ganesh is known to love sweets. In fact, all of the statues of Ganesh show him holding a laddu, a sweet ball-shaped dessert, in one hand. The dinner usually went on until 11 or 12, and even after we came upstairs, we would go to the neighbors’ apartments and chat for another hour, so we were always exhausted by the end of the night.

Our apartment’s Ganesh pandal and food for the potluck

The most exciting part of the whole celebration was on Saturday, when we did the Immersion. As soon as we got up on Saturday morning, we started making biryani with Nivedita and Sandia, our neighbor down the hall. Biryani is a spicy rice dish special to Hyderabad – and we made 11 pounds of it for the potluck that day. When we gathered for the feast that afternoon, I was so surprised to see that there was even more rice, curries, snacks, and desserts that other people had made for us to eat. It was like Thanksgiving, but with more food than I could have ever imagined.

After eating, we started the procession of cars to the lake, displaying the large Ganesh statue in the back of the first car, like a parade float. The car had been decorated like the pandal, complete with flowers and all of the small Ganeshas from each apartment. After our neighbors blessed the journey by doing a ritual in front of the car with water, fire, and breaking coconuts, everyone drove their cars and two-wheelers slowly all the way to the lake while banging on pots and yelling “Jai! Jai!” The cheering didn’t stop until the last Ganesh had been thrown into the water. 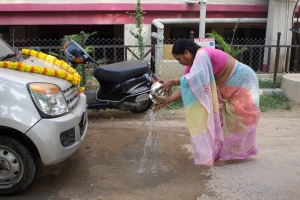 Blessing the travel of the Ganesh procession

The best part of this celebration was getting the chance met all of our neighbors. Now that Jennie and I have gotten to know them, especially the kids, we haven’t stopped hanging out with them since. Now, we have started eating meals on the rooftop with some of the other families. When the power goes out (which happens every day), we go to the neighbors’ apartments to pass the time together. A few of the kids come to our apartment every day after school to play games or ask for help with their English homework. Some of the kids have even made it their job to teach me Telugu, the local language, although I am hopeless at pronouncing the words. 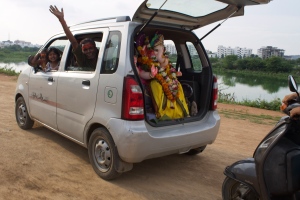 In the procession to the lake with the Ganesh statue

I feel so lucky to be surrounded by such a great community of people and that I have been able to form relationships with them over the past week. Not understanding Telugu, spilling the coconut water, or turning left instead of right during pooja didn’t seem to matter at all. Spending time with my host family and neighbors makes our differences melt away, and it has made a world of difference.

Our family and neighbors on the day of Immersion

This entry was posted on Friday, September 20th, 2013 at 2:46 pm and is filed under Fall 2013, Rhiannon in India. You can follow any responses to this entry through the RSS 2.0 feed. You can leave a response, or trackback from your own site.