Rhiannon in India: A Trip to the Beach

This weekend was another holiday, so Jennie, Romi, and I took a long overdue vacation south to Pondicherry and Chennai. After traveling north to the bustling capital a few weeks ago, we wanted a more relaxing destination – and we got it!

After we finished classes on Thursday, we boarded another Sleeper train with a 14-hour ride to Chennai ahead of us. Now, if you know anything about Bollywood or Indian pop culture, you are probably wondering if we traveled on the Chennai Express. Chennai Express is a very popular movie in India right now featuring two of Bollywood’s most famous actors – and it takes place on a train to Chennai. Unfortunately, our train was called Charminar Express rather than Chennai Express, but we took a few movie-like photos anyway. 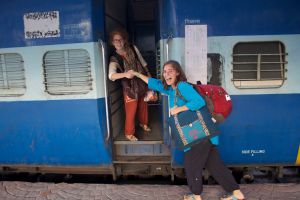 Before our trip to Chennai, we had a Chennai Express photo shoot

Even though we were in the most budget option of Sleeper compartments once again, the whole trip was very enjoyable. Truthfully, we were delighted to have seats on the train at all because, when we booked our trip online, we received RAC tickets (sort of like waiting list spots) and didn’t get our confirmed seats until two days before our trip! If we had boarded the train with RAC tickets, we would have had to share our bunks for the entire 14-hour ride, and we may have been separated. Luckily, after two weeks of watching our waitlist numbers get closer to zero on the website, we finally received our confirmed tickets and boarded the train to find three full bunks just for us.

One of the best parts of the train ride was the company we had in our compartment. An older Telugu-speaking couple sat across from us and, although we could barely communicate using English, somehow we shared food, laughed, and interacted with each other and had a wonderful time that night. There was also a young man in an RAC seat nearby that spent over an hour giving us suggestions for things to do in Pondicherry and Chennai. He seemed really enthusiastic to share information about temples, beaches, and festivals with us. Even after everyone had gone to sleep in their bunks, the old man and a younger man nearby, although strangers before the trip, sat up and chatted over chai for half the night.

After sleeping through the night in my little bunk on the train, I woke up early, waved good morning to the old lady across from me, then looked out of the little crack of the window visible from my bunk. I could not believe my eyes. The scenery was probably one of the most beautiful things I have ever seen! We were in the middle of green patty fields and marshlands, and every once in a while we passed through a village of small houses and huts. We passed people in the fields playing an early-morning game of cricket, and others in the villages getting ready for work. The train was following the coast, so in the distance I could see the Bay of Bengal, dotted with colorful sailboats. The best part was that the sunrise was reflected in all of the water collected in the fields and marsh from the monsoon rains.

When we pulled into the Chennai station, we had a quick breakfast and headed straight to the bus station to catch a three-hour bus south to Pondicherry. Pondicherry was a French settlement until the 1950s, so there is still a lot of French influence there (now mostly in terms of tourists), especially in the French quarter, a quaint little neighborhood on the beach. As we drove into Pondicherry, I noticed lots of flags that were a mix of the French and Indian flags. In the French quarter, all of the street names were French, many people spoke French, and people even said “salut” or “bonjour” to us on the street. We also had plenty of French food, coffee, and chocolates in the many French cafes all over the area. It was like we were in a totally different India! Being there reminded us of how many different cultures there are to see in India, and how no two are alike.

Without a doubt, my favorite part of Pondicherry was the beach. In the French quarter, the coastline is mostly rocky, but still has a few sandy spots as well. We spent our first afternoon walking along the waterfront watching kids play in the water, although it is technically not allowed because of the strong current and pollution. We didn’t swim there, but our hotel owner told us about a cleaner beach seven kilometers south of the French quarter called Paradise Beach, so on Saturday we hopped in an auto and went there for the afternoon. We were a bit unsure about what we would be doing because it is uncommon in India to swim at the beach, but we left the hotel with open minds and lots of food for a picnic. But to our surprise, Paradise Beach was almost completely deserted, so we jumped in the water for a swim! We picnicked and played Frisbee for a while, but all of a sudden black cloud started rolling in from over the ocean. Within 15 minutes, the wind picked up, the sky got dark, and it began to rain so hard we thought it was hailing. We ran back to our auto and got back to our hotel safe and sound, so now we can say that we survived a monsoon on the beach at the Bay of Bengal!

The rocky coastline of the French Quarter

On Sunday, we went back to the bus station and caught a bus back to Chennai. The next day was Ganesha Chaturthi, the beginning of a long festival to celebrate Lord Ganesha’s birthday. Ganesha is the Hindu god whose head resembles an elephant, and he is the god whom Hindus pray to first because he takes away obstacles in life. The story of Ganesha (as told by my host mom) is that his mother, Parvati, wanted a son so she made Ganesha out of sandalwood while her husband Shiva, the destroyer god and Ganesha’s father, was out of the house. Parvati put life into Ganesha and put him in front of the door to protect the house from intruders. When Shiva came back from hunting, Ganesha wouldn’t let him in, and not knowing that Ganesha was his son, Shiva cut off his head, which flew into the jungle. When Parvati realized what had happened, she explained to Shiva that he had killed their son and ordered that he go into the jungle to find Ganesha’s head. Shiva went out and returned with an elephant head instead and brought Ganesha back to life.

To celebrate on Monday, we went to a temple in Chennai and offered some flowers to Ganesha. During the festival, statues of Ganesha are put up in neighborhoods all over India, and people put small statues in their houses as well. There were six- to ten-foot tall Ganesha statues on all the roads and vendors were selling small clay statuettes in all the market areas. While we were in an auto on our way to the temple, a parade of people passed by with a mobile Ganesha shrine, so our auto driver parked the auto and ran over to receive prasadam (offered food and coconut water). When we returned to Hyderabad that night, we were surprised to find our neighborhood transformed with large, colorful Ganesha shrines on all the street corners complete with floodlights and loud music. 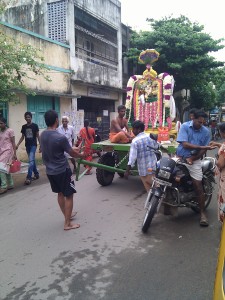 The mobile Ganesha passing our auto in Chennai

The trip this weekend was so relaxing and beautiful, but now I have a busy week ahead of me. Our apartment building will be celebrating for the Ganesha festival every night this week with poojahs (devotions) and lots of food. I will post soon about all of the festivities going on right here in Hyderabad!

This entry was posted on Tuesday, September 17th, 2013 at 12:56 pm and is filed under Fall 2013, Rhiannon in India. You can follow any responses to this entry through the RSS 2.0 feed. You can leave a response, or trackback from your own site.

4 Responses to Rhiannon in India: A Trip to the Beach