Changes are happening in Dunedin. The days are becoming longer. Flowers are practically fully bloomed. The temperature is gradually increasing. Spring time is just around the corner and winter will soon come to an end.

It is much easier to appreciate a country in warmer weather when nature is at its peak. Such great climate conditions motivates me to continue with my exploring of the country.

South of Dunedin is an area called the Catlins, the “forgotten corner” of southern New Zealand. Even though most don’t initially think to visit this region of the country, it is still well worth the visit. As my friends and I traversed through these roads, nothing could have prepared us for what we encountered. We weren’t expecting to come across anything that would particularly impress us.

We couldn’t have been more wrong.

Several waterfalls, cliffs and coastal beaches surrounded us everywhere we went. They were simply examples of New Zealand’s hidden, authentic beauty. We had only traveled for an hour from Dunedin and we had already entered a zone full of incredible pieces of nature. I couldn’t believe how easily accessible all of these spots were. To think that all of this was so close to where we have been living this entire time is mind-boggling. It doesn’t take much effort to see the amazing things that New Zealand beholds, no matter where you are in the country. 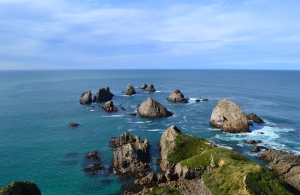 A coastal view from Nugget Point Lighthouse, which is an hour and a half south of Dunedin

As the semester is soon coming to an end, students are doing their best to finish their last minute assignments. Sometimes it is very easy to get caught up with exploring, for we forget that we have school obligations as well. I have become motivated to complete all my assignments early due to the fact that I don’t want to waste any of the time that I have left. The easiest solution is to get them done and out of the way so that I won’t have to worry about them when I’m off traveling.

Numerous plans are being organized and made for the remaining weekends that are left. My entire schedule has become completely booked with adventures that I have been waiting to do for the past seven months. Knowing that we don’t have all the time in the world, we’re doing our best to fit in everything in. 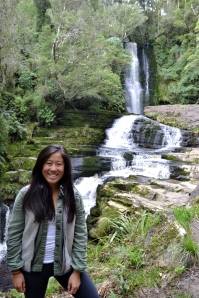 One of the most recent adventures involves tramping the Routeburn track, another one of the Great Walks of New Zealand. To much of our chagrin, there was so much snowfall that had occurred a couple days before, my friends and I were told that we would be unable to hike the entire thing. After accepting such disappointing news, we didn’t let that stop us from proceeding to parts of the track that we could discover.

The majority of the track was covered in heaps of snow, making hiking a little more challenging (and wet) than usual. Regardless of the fact that there was snow on the ground, the sun continuously graced us with its presence throughout our entire tramp. Likewise, the snow made the scenery much more rewarding. As we walked along the bush line, the snow capped mountains that jutted into the sky were in plain sight the entire time. Even though we didn’t reach our desired elevation, we were not deprived of any sort of views. The conditions of the track may not have been ideal, but being outside in this setting could not have felt any more worthwhile. 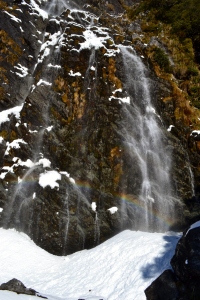 As we made our way through, we encountered the massive, fresh Earland Falls

Staying overnight in one of the huts that is provided on the track is common. We stayed at Lake Mackenzie hut for the night after hiking for 4 hours to an altitude of 1,081 meters. Since we were tramping during the winter season, all of the power and running in the hut was turned off. However, we were able to make a fire and all that really mattered to us was that we had a roof over our heads. The world seems to take on an entirely different position when you set yourself outside of society. When you’re fully immersed in the wilderness and completely remote from civilization, the only thing that seems to really matter is the nature itself. 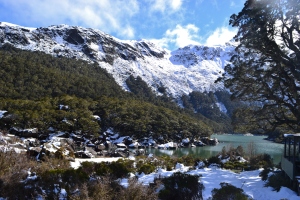 We finally concluded our day at Lake Mackenzie hut and were rewarded with beautiful views at the site.

Since our journey was shortened, we decided to embark on a last minute visit to one of the most beautiful places in New Zealand, Milford Sound. After driving through many narrow roads, down valleys and through the mountains, we finally arrived at scenery that took my breath away instantly. With the sun beginning to set, it brightly shone over the lake and cliffs that lay in front of us. The silhouettes of the cliffs were pristine, each possessing its own kind of shape and dimension. We were only standing at the entrance to Milford Sound, so the features are still indefinite to us. The entrance was so astonishing, one can only imagine what it is like to explore within. 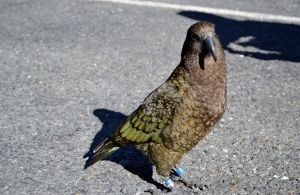 A kea, one of New Zealand’s native birds

The world of New Zealand has much to offer. Because of its distance from every other continent of the world, it seems to be forgotten. Yet, that makes it much easier to appreciate everything within it. Not everyone seems to realize its magnitude of splendor. When it comes to exploring, I enjoy the fact that I am cut off from technology, electricity and modern necessities. Because of these conditions, I am able to fully focus and value what’s in front of me. Unlike technology, sights like these aren’t always accessible.

Traveling within the country has become practically a second nature to me. Every weekend, I am always anticipating that I will be on the move, going somewhere. I have become accustomed to a completely new lifestyle. It’s full of so much adventure and animation that it’s hard to imagine that it’s all going to stop once I go back to the states. Even though the end is coming soon, it’s vital to enjoy the time that I have left. 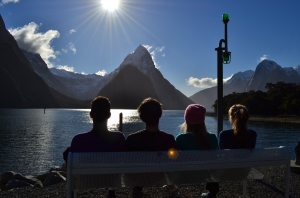 The team at the end of the day at Milford Sound

This entry was posted on Friday, September 20th, 2013 at 3:17 pm and is filed under Alyssa in New Zealand, Fall 2013. You can follow any responses to this entry through the RSS 2.0 feed. You can leave a response, or trackback from your own site.