Week #2. I’ve had the chance to walk around the city a lot this past week. In fact, I walked from my house in Providencia to the University which is close to Estación Central. It takes about an hour and fifteen minutes.

In general, I try and walk anywhere that will be within an hour or so and feel comfortable saying I have seen many areas of the city and walked through similar streets several times. Although, I should disclose that I have only been through the “safe” and usually nice areas of Santiago. In other words, all of my comments about the city refer to the middle/upper-middle class regions and are not a full representation of all of Santiago.

The past week and a half I walked around central Santiago confused. The architecture of the buildings seemed almost awkward. Actually, not the architecture of each individual building, rather the collective appearance of several buildings positioned close to each other. When I look one way on Avenida Providencia I see an old building with a structure screaming 18th century Spain which I imagine this to be the case in many Latin American countries. Then I look the other way and see the modern building of “Fundacion Telefónico” which holds various cultural events like theater plays and galleries. Across the street, on Plaza Italia, and I see the overbearing residential skyscraper marking it’s territory on central Santiago. 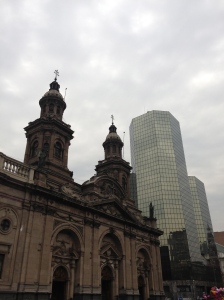 On the left is the Metropolitan Cathedral of Santiago built in 1748. To the right, stands a perfect example of the many skyscrapers piercing the Santiago sky today.

Sometimes I feel I am in Spain, sometimes London and at other times even Tirana! Tirana, for the few of you who might not know (joking, I know most of you don’t know) is the capital of Albania. This is where I was born, grew up for the first ten years of my life, where most of my family lives and where I have spent many of my summers since migrating to the United States.

All last week, as I found myself in different areas of the city, I thought “What is going on here? Santiago must be confused. Is it colonial? Is it modern? Does it have its own identity? Its own niche?”

I am not suggesting cities, or even the tiniest municipality, is, or needs to be, homogeneous. Santiago is big. Of course it is diverse. I do not expect the architecture of every single part of the city to be identical. I also do not want to reduce an incredibly diverse city of almost seven million inhabitants to one single identity. That is not what I tried to do.

With that said, I still contend Santiago is a special place.

I spent the past week and a half trying to understand how the different structures and diverse architecture tell the story of Santiago.

The colonial architecture obviously comes from the colonial period. Easy. At first glance, the skyscrapers filled with offices of foreign enterprises contend that Chile does enjoy a developed economy, sophisticated financial structure and plenty of foreign investment. These are the buildings that proudly show the international community “Hey, we have made it!”. The modernity is celebrated not only by the elite who benefit from an open and deregulated market, but from also a working class who hope swallow their objections in hope that trickle down economics will eventually…well, trickle down to them.

On the contrary, the buildings are also an uncomfortable symbol  of the seventeen years of military dictatorship that aggressively implemented neoliberal economic  reforms. The reforms made possible  the most stable macro-economy in Latin America, but also created severe inequality in earnings, education, and healthcare to name a few. Consequently, for many, the modernity, the high-rises, and the “booming” economy also represent classicism, racism, and enforcement of prejudices and the further entrenchment of the degrading stereotypes that sustain them. The disrespect of human rights for seventeen consecutive years during the dictatorship which carried out a neoliberal economy and replaced citizens with consumers, and the current systematic neglect of key functions of a democratic government and civil society are oftentimes seen as an unjustifiable sacrifice for macroeconomic success.

But, this isn’t meant to be a history lesson.

So friends, I walked around for a week and a half thinking Santiago was confusing me because of how incredibly diverse the architecture is. As I thought this, I came to a street crossing. The light was red for the vehicles, but that isn’t what’s important. In front of the stopped cars was a man on top of those high unicycles, dressed as a clown, and juggling. He was putting a show for the cars during the few minutes they wait at the red light.

That is when I realized, the city isn’t confused.

It is unbelievably eclectic.

There is a fusion of past and present. The struggles and the victories. Protests on one side of town and celebrations on the other. Business men in suits and students marching in the streets. A musician playing his fiddle in the subway train and a woman dressed as if ready for a fashion show, having an extensive conversation about the current health of her nail-beds. September 11th 2013, the fortieth anniversary of the military coup, will undoubtedly result in riots across the streets (No worries, I will be in the north, and more that safe), then a week later, everyone will celebrate the fiestas patrias with friends, family, barbecues, and late night parties.

But, these “extremes” should not come as any surprise. It sort of runs in the country. Geographically speaking, Chile can make even the most experienced National Geographic photographer go “Huh. I have never seen anything like that before.” There are the Andes, an entire coast line in the Pacific, the world’s driest desert, glaciers, enormous lakes, valleys, rivers, grassland, and finally, the eclectic metropolitan city of Santiago.

Right now, I am on a plane flying north for an excursion with my program. The plane is going over the Atacama desert, the driest and highest desert in the world, and in the background I see the snow capped Andes. 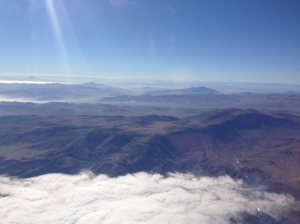 This entry was posted on Friday, September 13th, 2013 at 3:42 pm and is filed under Fall 2013, Mel in Chile. You can follow any responses to this entry through the RSS 2.0 feed. You can leave a response, or trackback from your own site.

6 Responses to Mel in Chile: Santiago