Jess en France: The One, The Only: The Palais Garnier

So I’ve had a dream ever since I was a little girl that I would one day be able to visit the opera house that inspired the novel The Phantom of the Opera. Although I grew up watching the modern remake, I’ve always loved the story-line –it made me fall in love with opera as a kid. The opera house that inspired the film happens to be the Palais Garnier, which located in Paris, and I’ve saved a visit for the end of my exchange as a celebration of the end of an amazing journey. 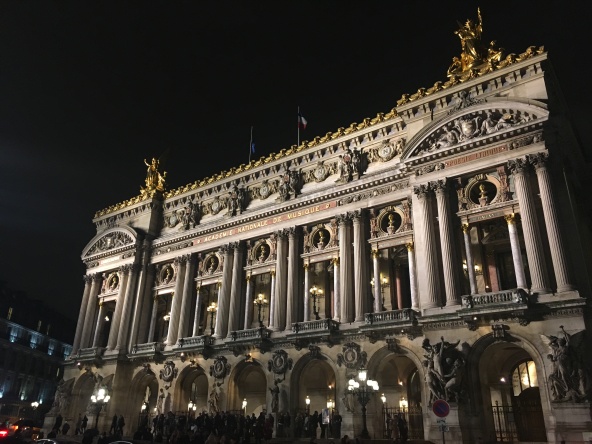 I bought my tickets months in advance and was able to get the best seat in the house to see an opera called La Clémence de Titus. The seat that I got was in a theater box, which is a private, sectioned off area for some of the best, front-facing seats in the theater. I got a front-row seat in the box and nothing obstructed my view. I would be remiss not to mention that this trip was fully funded by the Office of International Education and its wonderfully generous $500 cultural excursion stipend. It’s allowed me to fulfill a dream of mine that I’ve had for quite some time.

The theater itself is 1,979-seat opera house that was built in 1861. It’s named after its architect, Charles Garnier, and today is one of the most famous opera houses in the world. Like I said, it was the setting for Gaston Leroux’s novel The Phantom of the Opera (although it’s a bit embarrassing I’ve only seen the film—and the modern one at that). Regardless, the opera house is world-renowned for being an architectural masterpiece. Its Grand Staircase is equally famous along with its theater ceiling, which was only recently painted by artist Marc Chagall in the 1960s (who also caused a bit of a controversy being Russian and not French-born). 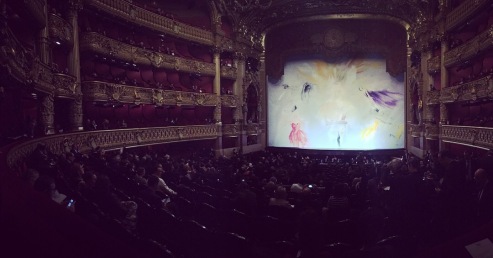 The play was equally impressive, especially being that it was my first live opera. I can’t rave enough about the voices of the singers. The level of control they have in their voices is especially apparent in the straight thirty seconds of vibrato they often have to belt at the end of a piece. They’re not wearing microphones (which is standard), and it isn’t needed considering how much their voices carry to every corner of the theater. The opera piece was composed by Mozart in 1791 for the coronation of Leopold II, king of Bohemia (if I’m translating this correctly). The story-line concerns a tragic love affair that, of course, ends in an attempted murder and the king’s forgiving clemency, as the title suggests. It was a stunning performance that left everyone standing in ovation.

I was actually able to get one more ticket to go to the Palais Garnier for a ballet (which I had to buy even earlier in advance). The choreographer is a well-known contemporary dancer, and I’m just as excited to see the opera house one more time before I head back to the States. I’ve officially been able to cross off a life-time bucket-list item, and now I get to say I’ll have done it twice.

This entry was posted on Sunday, November 26th, 2017 at 9:16 am and is filed under Fall 2017, Jess en France. You can follow any responses to this entry through the RSS 2.0 feed. You can leave a response, or trackback from your own site.