I’m finally on break and have the opportunity to take the walking tour of Paris I’ve been wanting to do for a while. This morning I set out for a neighborhood called Le Marais. This part of Paris is well-known for its typical Parisian-like architecture (and most importantly its amazing falafel vendors). I’ll start walking from there and use the River Seine as a guide to get me from one point of Paris to another. I’ve got some bucket-list items I’m looking to tick off today.

Just a quick side-note: I ran into another UR student on the metro visiting Paris for the weekend, which is quite a lovely surprise seeing a familiar face.

I get off the metro and in the distance I hear the faint chime of church bells, and, given my new-found love for ecclesiastical Gothic architecture, that’s where I head first. The first church I enter is just finishing mass, so I don’t snap any photos. But like many churches in France, the high-vaulted ceilings are so high above they hardly seem tenable, and the architectural feat (of all these churches in general) seems all the less possible given the age in which most of them were built. The incense must’ve been burning for a while because the light field of smoke permeating throughout the cathedral gave the air an ethereal glow against the backdrop of its natural lighting. Unfortunately I’ve misplaced my notes and can’t provide you with a name of the church. But trust me it is stunning.

After leaving the church, I continue on the same road until I stumble upon Paroisse Saint-Paul Saint-Louis and it’s even more magnificent than the last. At this point my plans have already shifted from finding good brunch places around Paris to church-hopping down the Marais. I walk through the church and this time have a chance to take some pictures. The detailed carvings into the church façade, ceiling, and pillars probably have to be repaired frequently. This church was built in 1627 on the orders of Louis XIII of France, and its first mass was held in 1641 by cardinal Richelieu as well, so the church, like many others, is a historical landmark. I’m sure the maintenance on this building is a constant process, so it’s hard to believe it’s as accessible to the public as it is and still holds mass every Sunday. It’s incredible.

On my way out of the church I run into another familiar face, this time from my abroad university. The world is feeling smaller and smaller.

In between Paroise Saint-Paul Saint-Louis, I run across the national archives. The entry is free for anyone under 25, so I walk in. Turns out that this archive houses one of the largest collections of archival documents in the world (casual), and the institution itself was established in 1790 (just after the birth of the United States)…it’s a testament to how old France is and the historical impact it already made prior to the formal realization of our country. The oldest document kept in this archive dates back to AD 625 and is a contractual confirmation of a land grant from the city of Paris to the Abbey of Saint-Denis. This document was recorded by King Clothar II, a king whose rule dates so far back I don’t remotely recognize the names of the populations he ruled. Maybe I should brush up on some more history.

I continue down the street and find a large library with crepe stands all around. My first bucket list item: get a street crepe. I have a nutella-strawberry concoction that tastes heavenly (but unfortunately I forget to snap a picture—as always happens when food is placed in front of me). I keep walking until I hit my next bucket list item, which quite frankly happened by accident.

When buildings are under construction in Paris, which they often are given their age, the city places a large drape of some sort over the façade. I walk up to one of the buildings with a massive drape over its entire north-facing façade and decide to walk inside because I’m thinking it’s a church. I squeeze through a side door into a dark hallway (that’s only naturally lit) where I am handed a pamphlet about the German church choir performing there within the hour. Curiously enough, this is one of my bucket list items—to watch a choir-organ performance.

I look up from the pamphlet and find myself in Paroisse Saint-Eustache, and it is utterly massive and hauntingly beautiful. Just last night I was in the Notre Dame cathedral, but this church easily rivals its beauty. Because I’m just in time, I get a good seat in the front of the church where, for the next two hours, I listen to the haunting serenade of the choir and organ as it resonates throughout the entire cathedral. 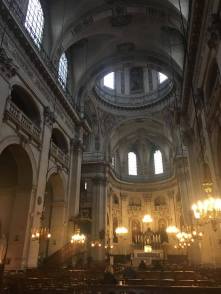 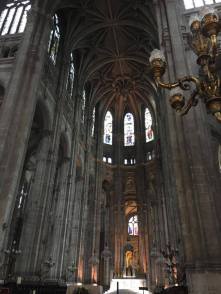 It’s hard to believe that all these churches can exist together in a few mile radius of each other. But that’s what is incredible about Paris—it’s a modern city that, simultaneously, is visually saturated with centuries of French history.

I just got home and have started planning the rest of my week off. I’ve just spent $400 to go to the Palais Garnier for an opera and ballet performance next month, which is thankfully reimbursed by the OIE. (To any prospective student studying abroad, do take advantage of the $500 the OIE gives you to attend cultural events in your host country!). Tomorrow, I’ll be doing some more writing at a library in Paris called the Mazarine. And soon I’ll be planning a trip down to the south of France, hopefully in the Alps, where I’ll be hiking for the weekend. I’ll be sure to cover my adventures down there in the next post.

This entry was posted on Sunday, November 5th, 2017 at 10:23 am and is filed under Fall 2017, Jess en France. You can follow any responses to this entry through the RSS 2.0 feed. You can leave a response, or trackback from your own site.