Successfully moved into my apartment (Global Village) for the next four months. I have been here for almost a week now and all of my roommate’s stuff is piled up but she has yet to be seen. I’m very excited to meet her though! There are two people to an apartment and we both share a bathroom and kitchen. A couple of cats, especially a grey cat, tend to walk around my apartment. We aren’t supposed to feed them but they’re so かわいい (cute).

Our Welcome Dinner was full of study abroad/exchange students and first-year students at AIU. After a day of information sessions, we were finally able to grub. Kiritanpo Nabe, a famous Akita dish, was also served. Unfortunately I couldn’t take a picture but I’ll make sure to post one later. SUPRISINGLY, during this dinner, I spotted someone wearing my high school T-shirt. I ended up talking to him and he just graduated from Kubasaki High School and is now attending AIU. What a small world. After dinner, I joined him and his friends to play basketball!

We ended up missing the train to the Omagari Fireworks Festival, Tohuku region’s biggest fireworks festival that was expecting about 760,000 people. Firework teams from around the country attend and compete to see who can put on the best show. It’s alright we missed it though because we ended up finding another festival at Akita Station. A man was walking a bunny on a leash. Yakitori (basically meat on a stick) and chocolate covered bananas were at every food stand. A professor was at the festival as well telling us about all the stores only walking distance away from campus. It was upsetting when we discovered he was actually a professor from Akita National University, not Akita International University. The six of us ended up hanging out at a gazebo till we had to catch the train to Wada Station and the bus back to campus. A very chill night filled with laughter over stories back from home – Slovenia, Belgium, Washington, Colorado, and Virginia.

Our Kanto Club performed for all of the parents, faculty, and students after our matriculation Ceremony. Apparently there’s a famous Kanto Matsuri (Kanto Festival) held in Akita every year where performers balance kanto (long bamboo poles) with paper lanterns attached to the end. These students would take turns balancing the kanto on their heads, shoulders, and even backs, while adding more pieces of bamboo poles at the end of the stick. There were also other students to the side banging on taiko (Japanese drum). Unfortunately, one of the students was unable to balance the kanto and ended up running it into a tree! 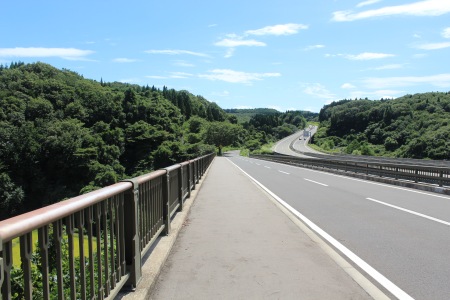 There was a break during orientation so I decided to take a walk and explore more around the school…we really are in the middle of nowhere. It’s so nice and peaceful. While walking, I followed an uphill, narrow path on the side of the road and almost ran into about three spider webs. Go Spiders, right? My school mascot back home is the Spiders, by the way. I walked until I hit a gate that led to the airfield – the Akita airport is only a 10-minute drive away. I ended up walking back to campus, but I must admit, the plethora of trees and beaming sun with Chance The Rapper playing in my ears made for a very nice walk.

Three of my friends and I decided to go on a walk in a nearby park and ended up running into some very nice people. We attempted to hold a conversation with our broken Japanese and actually ended up talking for almost an hour while constantly being bitten by mosquitos. Guess how old Suzuki-san, the man wearing the red shirt, is…he even asked us to guess. We all guessed 70 years old. Turns out he’s 90 years old! He looks much younger than that – it’s probably the miso soup. Before we left, Suzuki-san forced us to take a can of horsemeat with soy sauce. We plan on seeing them again and getting ice cream together.

This entry was posted on Thursday, September 8th, 2016 at 3:57 pm and is filed under Naomi at Akita. You can follow any responses to this entry through the RSS 2.0 feed. You can leave a response, or trackback from your own site.