Clara in Italy: The Final Semester

So I realize that my abroad experiences aren’t the norm. In my time at UR, this will be perhaps the fourth time I’ve gone out of the country through a school-sponsored program. (Don’t worry, I know I’m unbelievably lucky. It’s pretty ridiculous.)  I’ve so far gone to Russia, Japan, and Denmark for an SSIR trip, a summer language program, and the traditional semester-abroad respectively. I don’t suppose Italy will be too frightening after all that! Some rather terrifying things have happened to me in Europe at this point (mostly of my own making), so I’m looking forward to a calmer experience this time around!

Uh. Famous last words or something?

Packing is, of course, stressful as usual, and I’m struggling to decide which art supplies to bring to an art program overseas. All of them?? Perhaps?? If I had the option, I’d only bring a single suitcase because I’ve discovered that the hassle of lugging things around is almost never worth what’s inside them, but I should probably remember things like laundry and medications and the like. Important.

A little bit about me: I’m short. And I’ve recently discovered the hobby of rotting down animal corpses in my backyard to collect and clean the bones! Here’s a selfie! 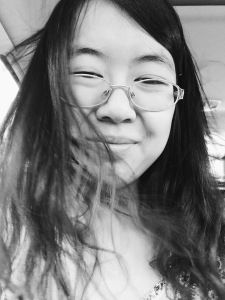 Isn’t that all you need to know, really? A new friend just gifted me a lovely mouse skeleton that’s soaking in peroxide as I type. I’m really excited to see how it’ll turn out and if I can articulate it into a free-standing display. Not gonna lie, I’m pretty hype about the prospect of finding different species in Italy, especially birds that are non-native to the US since those would be legal to possess here in the states.

Here’s my first little collection of bones I found in a pile on my neighbor’s lawn: 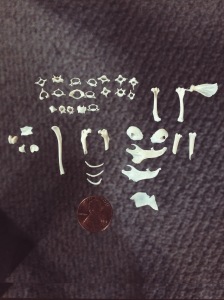 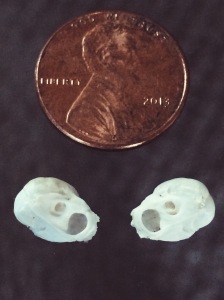 Aren’t they pretty? I suspect they are also a mouse, or perhaps a small squirrel or rat. Some rodent in any case! Fun fact that I had to learn: those bones shown in close-up are apparently called bulla and they’re essentially where the ears connect to the skull. They were a mystery for a while before I asked the internet.

I’m from Rochester, NY, up by Lake Ontario where the snow falls fast and deep, and we have surprisingly fabulous sunsets and skies. 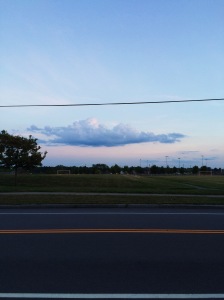 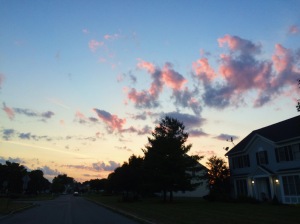 Pictures, of course, never do the sky justice.

In all seriousness, I’m not sure what to expect from Cortona, besides lots of art and massive hills. Since I’ve been working on my own interdisciplinary program, I’ve never had a full-on arts-only semester. This will be the first time I’ll be working in the studio for more than two classes at a time, and I’m uh, probably ready? At the very least, I’m looking forward to producing an actual body of work by the end of this semester before I graduate and am thrown to the real world. Motivation has always been a tricky thing for me, and I’ve found that I produce far more when I have consequences chasing me. (Don’t we all in the end? Sigh.)

Sadly, I don’t think I’ll be making it back to Europe for quite a while after this trip. Those expensive plane tickets and all. So I’m hoping to make the most of what time I do have there! I’m going to try and actually walk all over the city I live in this time, as opposed to the mistakes I made while in Denmark, and hopefully do some travelling on the weekends. Since I have no visa, I’ll have to leave the Schengen area four days after classes end (yikes), so it will be a speedy journey to the UK. At least, that’s the plan. Speaking of which! Mudlarking on the Thames!! Definitely looking forward to finding some 1500s equivalent to cigarette butts along the river. And bones.

On a more sober note, heard about the earthquake this morning, which was a generally distressing way to wake up. We’ve been notified that Cortona was unaffected, but the smaller towns near the epicenter sound like they’ve essentially been razed to the ground. So we’re all still going, but I expect the mood will be perhaps a little graver than our initial expectations. The death toll so far has risen almost 300% since 8am this morning, and I’m hoping it doesn’t go up any more.

To end on a happier note, here is a silly photo of my dog. Stay determined! I’ll see you all in Italy.

This entry was posted on Thursday, September 1st, 2016 at 4:33 pm and is filed under Clara in Italy. You can follow any responses to this entry through the RSS 2.0 feed. You can leave a response, or trackback from your own site.