KyungSun in Scotland: The Scots, Brits, and Somewhere in Between

Most of you are probably wondering who I’ve been hanging out with here in Edinburgh or if I even have friends at all…Anyone that’s studying abroad can tell you that their greatest fear is not making any friends. I certainly felt anxious about the type of people I’d meet. The good news is that like freshmen year, every exchange student has the “new” factor in common. You also strangely feel close to the other exchange students simply because everyone is experiencing the same fears, cultural shocks, and excitement over the little (often touristy) moments like you.

Tess, Kara, me, and Meghan at Burns Night 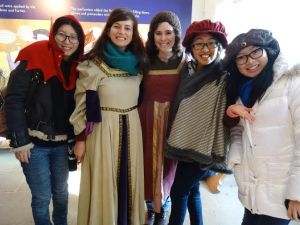 I’m pretty sure it was for kids, but we really wanted to try the costumes at Stirling Castle 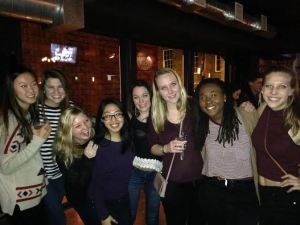 The girls from the Parliamentary Program!

On the other hand, it’s really difficult to meet Scots here in Scotland – how can this be? Here at the University, the best way to get to know other Edinburgh students is to join societies (clubs). So far, I’ve only really joined the Music Society. This is mainly because the societies I’ve wanted to join always seem to conflict with a tour or meeting I have as part of my program. But hopefully I’ll be able to join at least one more society.

I’ve also noticed that 99.9% of the time, societies socialize by going to pubs – even after church! After mass, the President of the Catholic Student Union invited everyone – students and non-students – to join them for wine. I admit, I was caught off guard. But I had to remind myself that the drinking culture is different here; it’s much more common to go out and grab a few drinks with friends.

Other than pubs, I’ve also met Scots at museums or walking along the beach wall: 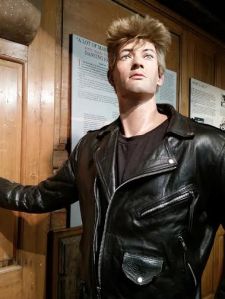 Met him at Stirling Castle

He was my favorite. I met him at the Regimental Museum

The only Scot I haven’t yet met in a pub is my MSP (Member of the Scottish Parliament), Richard Simpson. I’m really excited to work with him because he’s involved in a lot of healthcare issues ranging from chronic illnesses to healthcare inequalities which are issues that I’m also interested in researching. He also said that I would have a few opportunities to travel to visit his constituency which is going to be a great way to get to know Scotland even better!

The new Parliament building, usually referred to as Holyrood

Something that I didn’t consider before coming here is what it means to be Scottish versus British versus English. I embarrassingly didn’t realize that Scotland is not a country. Rather, it’s called a state because it’s part of the United Kingdom.

As you can see, it can get very, very confusing. But this confusion has also made me think about the importance of preserving your identity within a union of states like the United Kingdom. For those who don’t know, Scotland recently voted on whether or not they wanted to break away from the United Kingdom. Although it didn’t pass, coming here has made me realize how much Scotland prides itself in its unique history, culture, and independence.

Scotts Momument in the heart of Princes Street, dedicated to Sir Walter Scott.

I’m certainly learning a lot about how Scotland fits within the rest of the UK and likewise, how the UK fits in with the European Union (which is also anticipated to come up to a vote soon!). It’s a great time to be here as a politics student especially as the UK General Election is less than 100 days away!

The diversity in Scotland and the UK is also one of the reasons why I’m falling more in love with the state/city every day. Edinburgh is really a hub of diversity. But I’ve come to realize that being in a diverse place no longer means seeing people simply of different ethnicities/races. Rather, the more modern diversity is defined by people of cross-cultural backgrounds and multiple identities – the Pakistani-British, the Polish-Scottish, or the Asian-Australians. It’s a concept that I think we, as Americans, still have much to explore and I, as an Asian-American, have a lot to learn from.

Til next time, cheers! 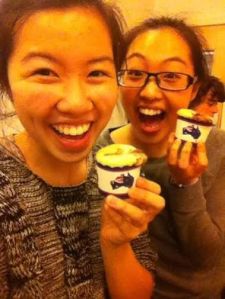 My Asian-Australian friend Jackie and I celebrating our (semi) successful nutella cupcakes!

This entry was posted on Monday, February 9th, 2015 at 1:02 pm and is filed under KyungSun in Scotland, Spring 2015. You can follow any responses to this entry through the RSS 2.0 feed. You can leave a response, or trackback from your own site.