Fabiana in China: Idioms and Bunkers

Mandarin Chinese idioms (成语) are four character Chinese sayings that are considered to be vital in everyday Chinese. Learning these idioms however, is often a struggle. When? Where? Why? Are all questions foreigners like me ask when trying to introduce one of these babies (idioms) into daily Mandarin conversations. We sure look smart when we do use them correctly though, since these idioms are deeply connected to Chinese culture, and at the same time help us communicate more effectively with native speakers.

This week’s idiom was “入乡随俗” or as Google Translate would decode it as “Romans” (?) That’s not quite the definition Google. But thanks.

入乡随俗 is best translated to English as meaning “when in Rome, do as the Romans do.” So yes, this week was all about putting this saying to practice.

Everything started with Monday night when I went to the gym for a jog. I was 10 minutes in my workout when I saw a foreigner, a FOREIGNER!, walking towards one of the fitness classrooms. I had checked the gym schedule that day and knew a fitness class was going to start soon. For over a month I’ve been dying to attend one of them, but was so scared to go in and not be able to understand anything or just ridicule myself that I preferred to stay back. However, this was my opportunity to go there and have some sort of emotional support from someone that looked as confused as I did.

I went in and practiced some of my “入乡随俗”。I even understood what the teacher was saying! Although she was mainly counting (一，二，三), it was a start! I was having the time of my life and wasn’t that scared anymore. I even gave a “加油!” (add fuel!) comment to the Chinese friend I made that was dying after her third push-up. After class, I even got a “你很棒!” (“you were great”) from the fitness teacher. I was fulfilled.

The week went by very fast. I started it with a great experience at the gym and ended up with a scavenger hunt organized by our language activity class. The scavenger hunt was about going around Peking University’s campus and asking people for directions. Although it sounded a bit boring at the beginning we ended up making friends along our way and learning about the campus infrastructure. 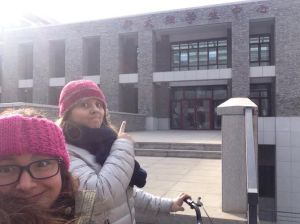 Talking about infrastructure, as well as going back to last week’s blog, I will now provide evidence for my assumptions that the place where we study is a nothing other than a bunker.

This is how it looks on the outside:

This is how it looks on the inside:

The name of our program: CSI (Chinese Studies institute). No cellphone network inside too! Smells fishy doesn’t it?

While I try to figure this all out, I want to end this post with a thank you note to all the messages I received after my blog last week. Thank you all for your support and best wishes! Whenever I feel down I am reminded of Dean Charm’s voice and say to myself, “choose your attitudes,” you can only limit yourself by the story you create about you.

This entry was posted on Monday, February 9th, 2015 at 2:39 pm and is filed under Fabiana in China, Spring 2015. You can follow any responses to this entry through the RSS 2.0 feed. Both comments and pings are currently closed.