Austen in Ireland: End of the Year – Cork, Liverpool, Belfast, and Finals

Right after getting back from Germany, I took the oral exam in my Irish class.  The Irish language was very difficult, but it was a neat experience learning another language.

The next day, I took a train ride to southwest Ireland to Dublin’s smaller sister–the city of Cork (Ireland’s second largest city).  Cork had a very different feel to it than Dublin with a laid-back attitude and with no tourists.  It was set on a nice river and had some beautiful architecture.  I would have argued that there were more pubs in Cork per capita than Dublin, which I thought initially was impossible.

We explored the city of Cork and ended up going to Blarney Castle.  A must while there was  ‘kiss the Blarney Stone.’ Kissing the stone is said to endow the kisser with the gift of the gab (or eloquence and skill at flattery).  The poison garden was another neat attraction at the Blarney Castle, which featured many lethal plants.

The following day, we took a day tour of the Ring of Kerry, a gorgeous attraction in the countryside of Ireland.  There were so many great landscape sceneries and also quaint Irish villages.  Although the weather wasn’t the greatest (fog really hindered our vision), the trip more than made up for it.

After getting back from this trip, I had my finals to conquer.  I had three finals in psychology, economics, and Irish.  My first final was a couple days after getting back from the Cork trip.  The whole experience of having to go off campus to an exam hall that fits 3,000 exam takers was intimidating.  I took a shuttle bus that UCD was running to the exam site and it took about ten minutes.

Once I entered the building, there were seat numbers for each exam taker at that time slot.  Once I walked into the exam room, it was overwhelming to say the least.  About 3,000 desks with uncomfortable chairs all lined up in many rows.  A lot different from Richmond, where exams are taken in classrooms.  The exam was fine but there were proctors walking up and down the rows about every ten seconds, which could get distracting.

Since I had over a week in between my first exam and other exams, I had planned a last trip to Liverpool and Belfast with my friends.

The city of Liverpool really surprised me.  It had one of the largest shopping areas I had ever seen and the dock area was very nice.  My friend and I had a jam-packed day.  We went to the Beatles exhibition, since no trip to Liverpool is complete without learning more about the Beatles.  Then, we went to three of Liverpool’s free museums.  We first went to the Merseyside Maritime Museum, where we learned much information about the maritime industry in Liverpool.  We then went to the International Slavery Museum, which explained the history of slavery in Liverpool.

The third museum we went to was the Museum of Liverpool.  This was a very interesting museum as it really explained the importance of the city, from the city’s large Chinatown to the rivalry between Everton and Liverpool Football Club.  Our next stop of the day was Anfield, the home of Liverpool Football Club, one of the most legendary soccer clubs in the world.  Our tour was fantastic and so was our very passionate tour guide. 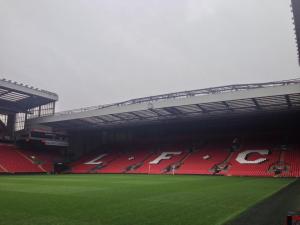 We went into the press room where the manager talks to media after the matches, the home dressing room where Liverpool suits up, and the visitor dressing room.  We also were able touch the ‘This is Anfield’ sign which was an iconic part of the stadium.  After this, we went into the stadium and saw the field.  It was amazing being able to see this stadium and also sit right where the manager sits during the games.  It was pouring when we were outside in the stadium, but it didn’t dampen our spirits.  The tour was quite interesting and I was able to really learn a lot more about the history of Liverpool Football Club.  We also went to the museum and saw some of the trophies Liverpool had won.

We got into Belfast early the next morning and learned that there was a bike race going on in the city that weekend (the Giro d’Italia).  We got to our hostel and started our sightseeing in the Queen’s Quarter, which is where Queen’s University, Belfast is located.  This was a very beautiful campus with many historic buildings and nice greens.

Our next stop was the Ulster Museum, a National Museum of Northern Ireland.  It was such a large museum and very expansive.  It covered pretty much everything that had to do with the province of Ulster, where Belfast is located.  We then saw the Botanic Gardens, which had some interesting plants and flowers.  This day was so exhausting and we ended up resting afterward.

The Titanic Belfast exhibition was our main sight of the next day.  The Titanic was built in Belfast and the exhibition was amazing.  The exhibition had many interesting parts, including a ride (to see what it was like to work on building the Titanic) and also a virtual tour of the interior.  It was overall an excellent attraction.  Walking through the port of Belfast, it is apparent that Belfast had and still has a very large industrial part to it.

On our final day of the trip, we went on a tour to Carrick-a-Rede Rope Bridge and Giant’s Causeway.  Our first stop was the rope bridge and it was a somewhat frightening experience walking over a very shaky rope bridge, but the views of the sea from the island once you got across were really great. The main attraction was Giant’s Causeway though.  Giant’s Causeway is an area of about 40,000 basalt columns (mostly hexagonal), which are the result of an ancient volcanic eruption.  It is a UNESCO World Heritage Site.  Walking all the way out to the tip on the coast was magnificent but also tough as the rocks were quite slippery. 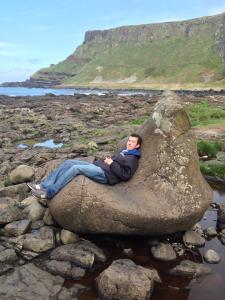 I found a nice rock at Giant’s Causeway, Northern Ireland.

This was really amazing and we walked back up top on the cliffs and were able to really appreciate the Giant’s Causeway Coast from up above.  When we got back to Belfast, we saw the Belfast City Hall, a marvelous building, before eating dinner and then heading back to our hostel since we were both leaving early the next morning.

Once I got back to Dublin, I studied pretty much the whole time before my last two finals.  It was a long day but I got through it and I soon realized that my time in Dublin would be coming to an end as I had to start packing.

I spent my last day sightseeing in Dublin.  I went to get my last fish and chips, to the Trinity Book of Kells exhibition and the Long Room, to the Science Gallery at Trinity College, to the Chester Beatty Library (religious history) and Dublin Castle.  I also just walked around the city, admiring the Irish atmosphere one last time.  I walked around O’Connell Street (I got souvenirs for many people), Grafton Street, and I ended up at pretty much where I started in Dublin, St. Stephens’ Green, a beautiful park right in the center of Dublin, and took some time to think of the great adventures and memories I will have from this semester.

I soon went back to the university and started packing.  Packing started off easy, but got more challenging when I slowly started running out of space. The next day (my last day in Dublin) was very much a relaxing day and I spent it packing and saying bye to friends I had made.  Although I had to get up early the next morning to leave, I figured I should spend one last night with the UCD Softball Club, as I made some of my closest friends in that group.  I ended up not getting to sleep until 4 a.m. that night and waking up at 6 a.m. but it was all worth it.

Saying my last farewells to the people, the campus, and the city of Dublin was challenging, but I know I will be back at some point in the future.  It was my most memorable semester so far and I would say the decision to study abroad (I decided last minute) was one of the best decisions of my college career.  It really opened up my eyes to another culture.  I am currently sitting at my home in the USA relishing the memories and wishing I were in Ireland.  I can’t believe I sometimes wished I were back in the USA when I was in Ireland.  I must have been crazy.

This entry was posted on Tuesday, June 3rd, 2014 at 4:08 pm and is filed under Austen in Ireland, Spring 2014. You can follow any responses to this entry through the RSS 2.0 feed. You can leave a response, or trackback from your own site.