Austen in Ireland: The Deutschland Expedition

After finishing up the last week of classes and final essays, I went to Germany for five days with a friend since we had a “revision week” between the final week of classes and final exams.  My friend and I decided to visit Berlin and Munich, the first and third largest cities in Germany.  Our trip began with my flight to Munich and meeting my friend at the Munich airport.  It was surreal that the airport had a tennis court and an outside area in between the two terminals.

From the airport, we decided to explore, marveling at the magnificent Bavarian architecture around the city of Munich.  We went in the Residenz, the former royal palace of the Bavarian monarchs.  It was a very regal. 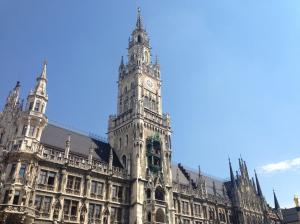 We also saw the English gardens, a large park in the city center.  It was an amazing sight seeing everyone enjoying their time on a weekday and not worrying about work.  We also experienced a beer garden, one of the must-sees when going to Munich, which was a fantastic and truly authentic German experience, including the food and beverages.

The next day, we took a day trip outside of Munich to visit the Bavarian castles of Linderhof and Neuschwanstein.  We first visited Linderhof, which was modeled after the famous Versailles chateau.  It had a similar hall of mirrors and the gardens around it were fantastic.  The castle was in such a picturesque setting in the mountains.  Our second stop was the very Bavarian village of Oberammergau.

The main attraction was Neuschwanstein Castle, one of the most famous castles in the world. Ludwig II of Bavaria commissioned the palace as a retreat.  The setting of the castle is absolutely breathtaking.  The climb is thirty minutes up a steep hill, but it was very much worth it.  The castle was unlike anything I had seen before and the views of not only the castle but the landscape were magnificent.  The bridge overlooking the castle from above was such a great spot to see everything. 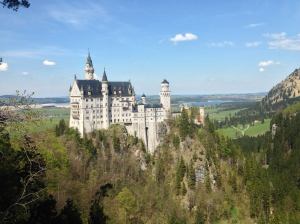 Breathtaking scenery of Neuschwanstein castle and the Bavarian landscape.

The next day we took a great tour through Munich and we were able to learn a lot more about the important history of the city.  We went up to the top of a church with terrific views of the city.

Our flight to Berlin was that night and we landed around 9 pm or so.  Berlin was a completely different city and the difference was apparent immediately.  Munich was a more historic and traditional city, while Berlin had more of a professional feel to it with its large business district.

We started our Berlin stay with a great tour of the city, which stopped at many of the famous sights such as the Brandenburg Gate (the former city gate), the Jewish Memorial, and the Berlin Wall to name a few.  Also, we explored Museum Island (a very nice area on the river with many museums) and the Berlin Cathedral.  The next day we decided to visit the concentration camp of Sachsenhausen, a concentration camp near Berlin used mainly for political prisoners.  It was a very eye-opening experience being able to see this camp, the living quarters, and even the extermination area. 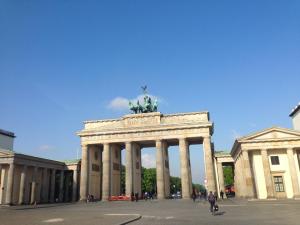 On our last day in Berlin we decided to go to the top of the TV tower, which had a height of 368 meters.  The views were great out onto the city and a fitting way to end this epic expedition.  This journey was a neat adventure and also my farthest trip from Ireland.  It was great going to the homeland of my relatives as I have a large percentage of German ancestry.

This entry was posted on Thursday, May 29th, 2014 at 1:48 pm and is filed under Austen in Ireland, Spring 2014. You can follow any responses to this entry through the RSS 2.0 feed. You can leave a response, or trackback from your own site.