Janus in Singapore: Which God? 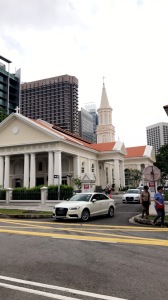 The Cathedral of the Good Shepherd – Singapore’s oldest church, right across from the SMU Library

Something struck me when I was going through the various photos I’ve collected from my time here in Singapore – there are quite a number of religious buildings in the city. I’ve never thought of Singapore as a particularly holy place, unlike certain parts of China or the Philippines that I’ve been to with comparable numbers of religious buildings, nor did I think that an extremely industrialized and advanced city would have such a strong presence.
There are five religions that have a significant presence in Singapore. According to the 2015 census, 33% of Singaporeans practice Buddhism, 18.8% practice Christianity, 14% practice Islam, 11% practice Taoism, and 5% practice Hinduism. These numbers make sense to me; a majority of Singaporeans are Han Chinese, with Malay and Indian groups representing about 10% of the population, each. It makes sense that Buddhism, Taoism, Islam, and Hinduism play such a big role in the lives of Singaporeans – these religions are the religions in the various ancestral homes of the people living in this city.

I didn’t expect such a large Christian presence, though. While I was in China, I didn’t encounter many Chinese Christians, nor do I know of a large enough presence of Christianity in Malay and Indian countries that could explain the 18.8% figure, a percentage that has apparently increased in recent years. According to census figures, 12.7% of the population was Christian in 1990 and 146% in 2000. While one I can understand that there should be a a small presence – Singapore, after all, was a British colony – I’m not quite sure why Christianity has a growing presence. You would expect that the Singaporeans’ ties to religions more closely related to their ancestral homes would increase in popularity, rather than a religion that was introduced by foreigners that no longer have a strong hold on the country. 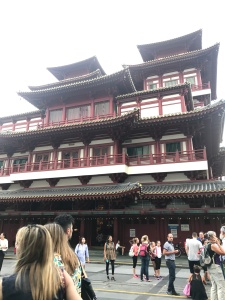 One of the larger Buddhist temples/museums in Chinatown

Another interesting aspect of religion in Singapore is that the number of highly educated Singaporeans practicing a religion, particularly for Taoism, Hindiusm, and Islam, is increasingly noticeably. This goes counter against a fairly commonly observed phenomenon where religion becomes less and less important the higher the level of education. I’ve seen this myself at SMU – the various religious clubs are very active in the community, and it isn’t uncommon for me to run into classmates at Sunday masses during the weekends, or even the odd weekday mass that I attend. Practicing my Catholic faith has definitely been much more easy to do in Singapore, simply due to the number of parishes that make it almost impossible to not attend Sunday mass. There’s a church a 10-minute walk away from my flat, and on weekdays or Sundays spent at the library, Singapore’s oldest cathedral is simply across the street.
There’s much more to learn about religious life in Singapore, particularly for the non-Christian religions. While I feel like I’ve touched the surface of what can be learned – living in Little India lets me experience many of the Hindu religious holidays, my many visits to Chinatown have allowed me to enjoy the various Buddhist temples, and the largest mosque happens to be on my favorite food street in Singapore – I do plan to eventually attend a service for each of the major religions in Singapore. It’s an opportunity that I wouldn’t necessarily have elsewhere, and my fellow exchange students who have done the same say that it’s a truly interesting experience to have.

Decorations outside a Hindu building in Little India, a minute or two’s walk from home. 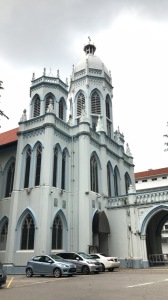 St. Joseph’s Church – another relatively large Church in Singapore. Unfortunately, the building isn’t very well kept, and almost seems like a relic of a past decade.

Colleen in Singapore: Coasting Around Cambodia

Nicole and I are currently on a bus ride to Phnom Phen for our departing flight back to Singapore. In the past four days, we have been on two planes, one overnight bus, two regular buses, two ferry rides, and several tuk tuks. The title of this post is deceiving. 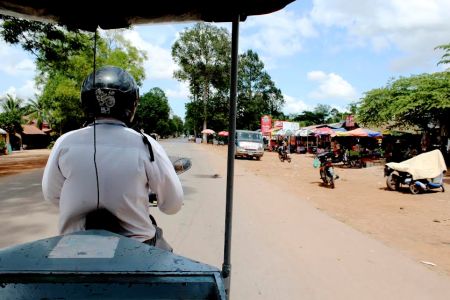 Friday, we flew into the Siem Reap and took a tuk tuk directly to Angkor Wat to see the temples. Our tuk tuk driver ended up taking us around the temples, which was great because we didn’t have enough time to walk around the whole area (and because we were so hot and sweaty, it looked like we had just gotten out of the shower). However, we did get out for about an hour and a half to walk around Angkor Wat, which is the main temple that most people know of.

The travelers we met later that night gave us a tough time for only spending a few hours at the temples, claiming it was “such an American thing to do”. But for me, a few hours was perfect and definitely enough.

Upon entering the temple grounds, a man came up to us asking if we would like a guided tour. We said sure, wanting to get the most out of the experience by knowing the history behind the temple. I think the only English this man spoke was “bad man,” “king,” and “yes.” He loved to say yes. After every incomprehensible sentence, he would finish with “yes, yes.” I was so deranged from the heat I just smiled, nodded, and continued to snap some pictures while taking in the temple’s wonder with a sense of awe and amazement.

After touring Angkor Wat, Nicole and I headed to our night bus, which took us to the beach town of Sihounkville. Upon arrival in Sihounkville we took a ferry to the island of Koh Rong, where we stayed in a bungalow right on the white sand beach.

Roh Kong is a backpacker’s heaven. A row of cheap yet charming bars, restaurants, dorms and mini villas hug the coast. Locals enjoy games of beach volleyball as their children test the patience of the island dogs. There were dogs everywhere, but they didn’t bother anyone, not even for food. 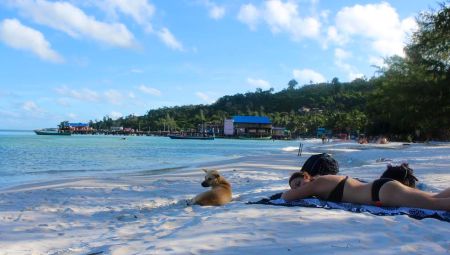 If you’ve ever heard of someone saying, “I’m going to quit my job and become a bartender on some island in Southeast Asia,” I imagine they would end up in some place like Koh Rong. 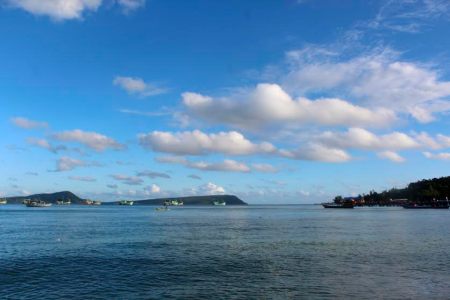