Olivia in Sweden: School and Flowers!

One thing I miss from UR is our dining hall, which is a sentence I thought I would never write. Students here don’t have a meal plan, and must frequent the local grocery store for all their eating needs. Thankfully, there are some eating areas to be found in the multiple academic buildings on campus. 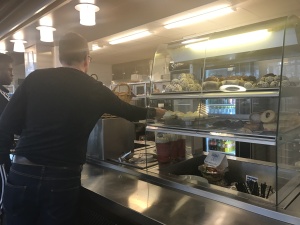 The building I frequent the most is Engelska Parken! Here is a picture of the eating area. Not as much variety as our dining hall, eh? But the coffee and food is always delicious.

The style of teaching here is also a little different from back home.

It is very discussion based. Usually, we read an article for class, and then the professor breaks us up into smaller groups to discuss what we read. To finish up the class, we come together as a class and share what we learned. Much of what we learn is self-taught. This has taken a lot of getting used to. I am also enrolled in a class that never meets until the final exam!

The self-motivation for academic pursuits will only get tougher as the weather keeps getting more and more beautiful. At last, some flowers are beginning to bloom! So excited to see the full impact as spring gets closer!

Isabella invited a couple of us to come over around 10pm since she was making a huge pot of stew. The stew came out soupy but it was still super 美味しい (delicious). It was a very chill night. We became pretty nostalgic knowing that it was the last week of classes. Isshin started playing the guitar and we sang some songs together, including Sorry by Justin Bieber and Closer by The Chainsmokers. I found out that Isabella bought the guitar on the “AIU Buy & Sell” Facebook page for only ￥1000. I was surprised considering Isabella doesn’t play the guitar; she said she always wanted to learn though which is why she bought it. Turns out Isshin wanted the guitar too but someone had beaten him to it. He found out it was Isabella when we got to the room HAHA!

I’m really going to miss my Japanese classes – JPL300, Reading, and Kanji. We all had such a great time joking around and attempting at understanding Japanese grammar. Our JPL300 teacher never spoke English so it made us try harder in speaking Japanese. We all struggled together with the exams, ポスター発表 (poster presentation), and endless amount of homework. I’m feeling sentimental just writing this all down. I’m most likely never going to see any of these people again but we all became a family. It was nice meeting so many people that shared the same interest as me in learning Japanese. Man, what a great semester.

Isabella and I decided to get dinner together at the AEON mall as a goodbye, although I’m going to see her again next week before I actually leave Akita, thankfully. We got McDonald’s for dinner…I was planning on getting the エビフライ (shrimp burger) but when we got up to order Isabella pointed at the Mega Mac picture. She told me I should get it and I felt up to the challenge so I ordered the burger with four patties in it…oh man, I was so full. And to top it all off, Isabella practically forced me to help her finish her food. I ate four more chicken nuggets and finished up her fries. I couldn’t walk afterwards. After McDonald’s…oh, by the way, I don’t know what it is exactly but McDonald’s in Japan is so good. Compared to the states, it’s more flavorful. Like I said, I don’t know what it is but man, I love Japanese McDonald’s. Okay, so after McDonald’s, we took プリクラ (sticky pictures) together! I look so funny in the pictures with my big eyes and weirdly shaped heads. I love taking these pictures though because you always turn out looking super girly. Also, you get to design the pictures and write/draw whatever you want on them. We walked around the mall some more, looking in shops, and ended up buying some Mister Donut. Oh, and Isabella asked a random mom to take our picture in front of the Christmas tree. We’re trying to get in the holiday spirit so you know.

This is a funny story. Annabelle found a bug in her room; apparently it jumped on her hand while she was writing her paper. She immediately freaked out and started messaging everyone to come to her room and kill it. No one was willing to do it because everyone else is also afraid of bugs. I asked her if it was a cockroach before going over to kill the bug for her because if it were a cockroach then I wouldn’t want to kill it. Cockroaches creep me out…along with centipedes. Anyways, when I walked in her room, I found her standing 6 feet away from her desk (where the bug was), staring at the bug to not lose sight of it. I immediately started laughing. I took some tissue and killed it. I held it up to her to show her that the bug was harmless but she started trying to get into the suitcase and wow, I laughed so hard tears started rolling down my face. Turns out the bug was a stink bug and it actually started smelling a bit.

This past week has just been snow…everywhere. I don’t have boots so walking around has been quite the struggle. To top it off, my shoes have holes in them so my toes are basically frozen by the time I get back inside from walking outside. The snow looks very beautiful though. I couldn’t believe it when I woke up one morning and walked to my morning Japanese class. I was in awe.

Sandy and I got lunch together at the restaurant near campus as a goodbye lunch (I’m also going to see her again next week before I leave though, thankfully). I never thought to go to the restaurant because I have a meal plan on campus. All students from AIU get a discount from this restaurant though so that was nice! Sandy was craving meat so she got pork cutlet with a small bowl of udon. I decided to follow and ordered pork cutlet with egg. The egg was still bubbling when it got to the table and it was absolutely delicious. Sandy enjoyed her meal so much she literally said “yum yum” after every bite. You know, after knowing her for this long, I still don’t know her age? She won’t tell me. She said she’s going to wait until we say bye to each other to tell me….oh brother.

Well, this post isn’t as eventful since it was just finals week. Many people are leaving tomorrow to go back home or go on trips before they leave Akita. Next week is finals week but many students were able to get their finals pushed up, like me. I was able to move up my International Trade final to this week; thankfully all of my other classes had finals scheduled for this week. Since I have another 6 days till I leave Akita, Isabella and I decided to take a trip to Osaka! We leave tomorrow morning and will be there till the 21st. We come back to Akita on that day and leave the following morning. So, I’ll still be able to see my friends when I get back on the 21st. I can’t believe this semester has come to an end. Time flies when you’re having fun, huh? I’m trying not to get to nostalgic and upset about leaving Akita…yet. I’m going to enjoy my time in Osaka – sightseeing, shopping, and eating good food! I’m super excited! I also definitely have to buy some birthday and Christmas gifts for my mom, Tyler, and Patrik. Like I said, Patrik is going home to Okinawa with me this winter break. They all have December birthdays….can you believe it?