His name is Ingefära, which means “ginger” in Swedish. 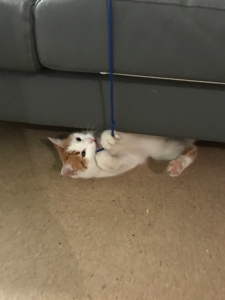 He is a cat that lives here in Flogsta and he is known for traveling. He even published a book about his travels and he’s only 2 years old! What were you doing when you were 2?

We were pleasantly surprised to open the elevator door outside our corridor only to find him waiting inside! We played with him, fed him, and provided him time to sleep before he took off on his next journey. I look forward to seeing him again. 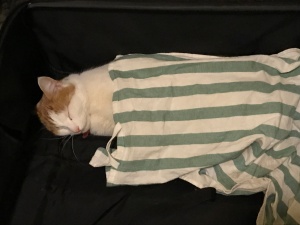 Since he’s been gone, I’ve kept myself busy with a new job. Last week was my turn to take out the trash! Sweden is very environmentally conscious and we have 6 different containers depending on the type of trash being disposed of: plastic packaging, colored glass, metal packaging, newspaper, cardboard, and clear glass.

Looking forward to not having to deal with that for a while!

Thankfully I didn’t have to spend too much time wallowing over Ingefära’s absence or my trash duty. Last weekend, a nation hosted a “Chocolate Gallop” with over 40 different chocolate treats. We arrived late but were still able to make off with some delicious treats. Woo-hoo! Until next time! 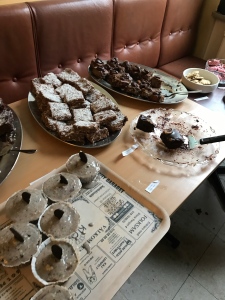 Clara in Italy: Cats of Cortona (and elsewhere)

This is going to be a very brief post detailing some of the wonderful cats we’ve met in Cortona because I have to say they are a rather large part of daily life.

Cappuccina. She mostly hangs out on the hill between campus and the rest of town. Kind of snooty, but will consent to be pet most of the time. Generally adorable. Has a doppelganger that has a little cat house near the Mercato at the bottom of Cortona.

Regal Cat. Not sure what their real name is. One of the staff told me once (Antonella! Fabulous cat whisperer), but I unfortunately forgot it. It starts with a G I believe, but we just called them Regal Cat. 😦 They also hang out on the hill between campus and the rest of town. Too good for you.

Silly Cat. Usually pretty low down on the hill. Don’t see them too often, but they’re still pretty nice.

Beautiful Cat. Lives with a family down by the Mercato. Unfortunately difficult to get a photo of, since she lives so far down and it’s kind of exhausting to go down all the time and isn’t always out. But look how pretty she is!

Selena! Very elusive cat. Lives on the studio portion of the campus, but comes up to the dorms to get fed by Antonella. There’s another cat named Lucy who I think also hangs out over there, but is even more elusive. She’s grey, though.

Mysterious Cat. Have seen them but once! Managed to get this picture, staring out of the darkness of an open window. Pretty majestic, I’d say.

And now, the THREE GRACES: Squiggle, Eddy and Sylvester. The cats of the dorms. Sometimes they sneak into the building. Mostly pretty skittish, but have been getting along pretty swimmingly since Squiggle joined the group. I’ve been reliably informed that Eddy and Sylvester never really used to hang out until Squiggle showed up.

So Squiggle. Named for the little kink in his tail. Gang leader. Likes to roll around in the dust and dirt and makes funny meows. He also kind of pancakes himself onto the ground when you reach for him. Wants love but also tends to run. But when you get him to come to you, he’s very snuggly. Has gotten much fatter than he was when he first appeared, which is kind of a relief, but he’s also a bit resource-hoardy and kind of a pig. Will steal the food from the others. We suspect he was abandoned and this probably accounts for the way he acts. Poor Squigsquag. A student favorite.

Eddy. Constantly sick. Sneezes a lot. Doesn’t seem to be able to clean himself and seriously needs a bath. Is the neediest cat I’ve ever met. When Squiggle is getting pets from people, Eddy is not far behind and often comes meowing aggressively and plaintively from the bushes. But he doesn’t want love from you!! He’s after Squiggle’s affection. I really love Eddy. He’s a sweetheart when you can get him to trust you for a hot second. He’s a little mangy, but that seems to be no fault of his own. A classmate bought him a comb, so maybe Antonella can clean him a bit better since he can’t seem to do it without a little help. (Unfortunately, only one solo picture for him.)

Sylvester. Definitely the prettiest cat around. Extremely fluffy and well-preened, but he can’t meow. At first we thought he was hissy and unfriendly, but it turns out he really just can’t make meowing sounds. Seems standoffish at first, but on the rare occasion you can get him to come closer, he is wonderfully rewarding to pet on account of his glorious fur. The best cat-loaf.

And, just as a bonus, here’s my art history professor with a friendly cat she met in Orvieto. Think he was just starting to get sick of being held at this point, but he was pretty amenable to it for the first few minutes.

That’s all for this frivolous post. If you hate cats, I’m very sorry. Stay determined!

Posted by Clara in Italy