As you can probably tell, I have arrived safely in Thailand and am now acquainting myself with the language! What a trip it has been so far. I arrived on the 16th after 33 hours of travel that included two flight delays.   I do not think I have ever been so exhausted in my life. My sightseeing that first day totaled the 15 minutes viewed from my cab window and the walk to my third story hotel room. I barely showered and unpacked before I fell asleep for a short ‘nap’ at three in the afternoon that ended up lasting 16 hours. Luckily, sleeping through my seven alarms actually put me right on track for the 11 hour jet lag I would have experienced.

Growing up, I have always heard the phrase “what a small world.” I never considered the world a ‘small’ place until arriving in Bangkok. After I posted a photo online about my travels, a boy from my hometown commented that he was also in Bangkok. Even though it was the last day of his six week stay, Derek invited me to join him and his Thai friend on their final adventure. We made our way through the horrendous traffic, after stopping for my first Thai iced tea, and ended up riding elephants. Being surrounded by animals so ginormous and normally seen at a distance behind bars was so surreal. I have to say I love bear hugs, but I now like elephant hugs more.

The very popular Thai Iced Tea in a bag

If you ever see a picture of a relaxed individual riding an elephant, just know that it is actually harder than it looks. Here, for example, I am struggling to keep balanced!

After my ride, I visited my first temple that hosts the second largest Buddha in Bangkok. I learned proper temple etiquette, including fully covering one’s ankles and elbows, stepping over door entrances, and ensuring all toes are pointed away from Buddha while bowing three times to him. The temple was unlike any architectural structure I had ever seen before and I look forward to admiring many more throughout this semester! 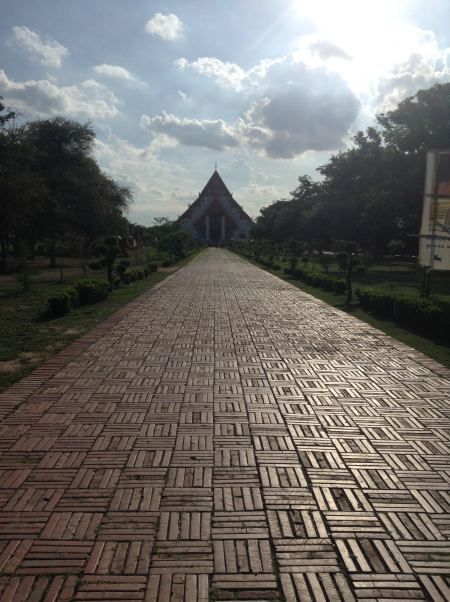 Derek raved about an amazing celebrity bakery and downtown Bangkok Blue Sky rooftop bar and restaurant all day. After a long day of long walking and sitting in heavy traffic, I could not wait to delve into a traditional Thai delight. On our drive there, Derek decided to stop at home to change clothes. When we were ten minutes outside of the city, we received notice that two bombs went off in the downtown area. Both attacks were directly below the places we were headed.

I guess I should provide you with some context of the bad luck spells I have had while traveling in the past before I continue. The day of my first ever plane ride, the Malaysia plane went missing. While in London, the Charlie Hebdo attack occurred. During my time on Crete, the Greek financial crisis further erupted. Derek and his friends were aware of this misfortune and, when we received the news, they turned to me in the back seat of the car with disbelief. Was I the bad luck charm?

Looking back on that day one short week ago, I remain shocked. That was such an unfortunate event that this city has not seen in years, yet how was I so fortunate?

Although I cannot be certain where I would have been exactly during that time, it is very likely that I could have been on the street or watching the following events unfold from the rooftop.

In the downtown area for some time afterwards, you would not have expected that an attack occurred moments ago. It was not until hours later that a city lockdown went into place. During that time, I felt a whirlwind of emotions as I sat frigid in the standstill traffic. As I contacted family concerned about my safety, Thai people continued to shop, eat, and walk about the surrounding streets.

After what seemed like hours, I arrived at my hotel. I was highly concerned when I found out that two girls from my program I met for the first time earlier that day were missing. The girls’ families and hotel staff had not heard from or seen them all night and both of their phones were turned off. After over an hour, I was beyond relieved when both girls pulled into the hotel parking lot. I was also amazed to hear that they were ten minutes from the attacks but were unaware of the situation for over four hours.

I cannot express how grateful I am for the support I received from my family, friends, and school that day. After posting a general message online for concerned family and friends, I received notice from both people close to me and others I have not spoken to in years who were sending love and prayers my way.   My email inbox was filled with messages from UR and CIEE staff concerned about my well-being and providing me with updates and information. Even though I was alone, I felt so connected to everything I know and all those I love who were a ‘small’ world away. Someone was watching over me that night, and they taught me what it really is to know there is no place like home, and no one like those people that make it home for me.