Justine in Russia: My Friend, My Host Mom

The hardest part about leaving Russia was not leaving the place itself, but leaving the people. This includes the people in my program, the Russian students I met at the university, and last but not least, my host mom. One of the main reasons I had such a wonderful time in Russia was because of how my host mom treated me.

I remember the first time I met her, I was extremely nervous because I thought I was being rude. However, I really did not have much to say. I only knew about twenty verbs and none of them I could use to describe me. I also had a two month long break from my Russian (only a semester), so I was extremely terrified. I remember sitting in this taxicab with my host mom and she could obviously feel my nerves. She would tell me to look out the window and talk about how beautiful certain streets/monuments were. When we finally got to the apartment, I was really tired and still stressed because I hadn’t spoken many words to her. However, she was extremely kind and accommodating the whole time. Even though I share a room with my grandma at home, sharing a flat with an older person still worried me.

What if I made too much noise after 9pm? What if I came home late too often? I remember over our first dinner, she was speaking 90% of the time and I did not really talk much (only because I really could not understand most of the things she was saying). I managed to pick up a few things about her family, but I forgot a lot of important details. Towards the end of the program, I asked her things like what she used to work as, etc. As she retold me all of this information, it hit me that she did tell me all of this information, but my vocabulary was not big enough for me to understand half the words she was saying. 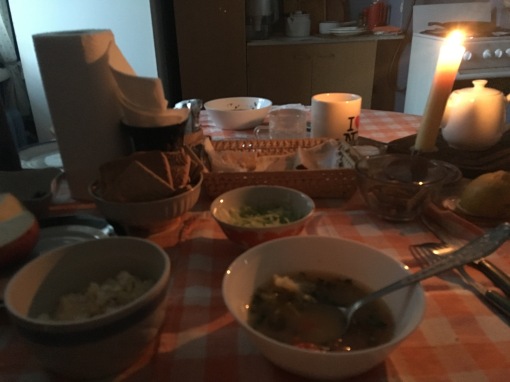 In my second week, there was a power out in our apartment complex for about three hours, but we still managed to have dinner in the dark.

My host mom always treated me like I was one of her own, not just a student living in her house. Every time she made a meal, it was for us to share and we always talked about our day. She would divide our food in half, but always snuck an extra scoop of rice or extra piece of cutlet. I always felt bad whenever I called home and let her know that I would not be home for dinner, but most of the time I just went home and stuffed myself anyway because I did not have the heart to call her thirty minutes earlier. Every morning, I would tell her when I was leaving and she would either tell me I was overdressed or underdressed or that I forgot to bring an umbrella. She asked me if I was wearing a new shirt or if she has just never seen me wear it before. She asked me about my friends and about my plans everyday. She wanted me to have plans. She was happy whenever I stayed out late because “I am young and I should”. On her birthday, she hosted a dinner party with her friends and I. She was young at heart, even though she had just turned eighty one years old. We lived on a fifth floor walk-up. She walks everywhere and goes skiing every Saturday in winter and early spring. She told me she’s been to Brazil eight times. She has been to many places. She talks about her daughters and her grandchildren. 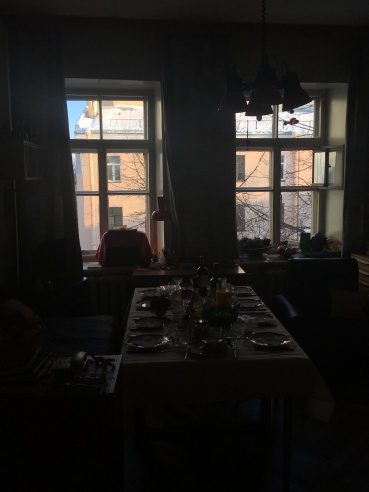 The dinner table (that she set up in her bedroom since the kitchen only had room for approximately four people).

Sometimes I came home from school late and she would have left a note for me telling me what she had prepared for me to reheat. I would always wait for her to come home before I went to sleep (once that was around 1:10am, but it was a Saturday). She always supported my decisions and never questioned what I did. When I was sick for that one week in March, I told her I did not want to go back to the doctor anymore and she did not push me to do anything crazy besides sleep. I told her I was going to Kazakhstan and Ukraine for travel week and she told me they were great places to go. I told her I was going to hop on the midnight bus to Helsinki and come back eighteen hours later because I did not want to pay for accommodation. However, all she did was laugh at me and said that she would look forward to seeing me home Sunday morning at 5am (she was asleep when I came back, but woke me up at 9am for breakfast).

I remember when I was packing my stuff up the day before I had to go, she would pass by my room and laugh at my lack of progress. I usually am a fast packer, but knowing this was the end of my study abroad made it a lot harder. I know I will return to Saint Petersburg to visit her, but I would no longer be the person living in that room. I no longer had the keys to her apartment. There would be someone else living there. I know she will let me in and make me tea like she always did. She will yell at me because I would have brought her a souvenir from somewhere (I always brought her back something whenever I left Petersburg). The day I left Petersburg, she was going to fly to Greece that same night. I assume she has returned, but who knows, she could be anywhere right now. I am currently writing a letter to her, but I haven’t finished yet. 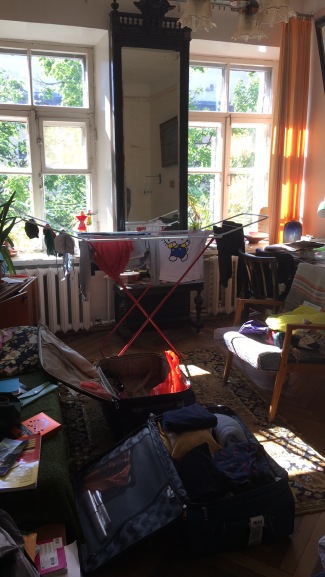 Packing on the day before my flight.

I remember us hugging goodbye as my Uber driver patiently waited for us to say our last words to each other. When I finally got into the car, my street was full of traffic, so my host mom stood by the car for another two minutes. My driver was a kind Uzbek man from Samarkand. He asked my host mom if she wanted to come to the airport too and she smiled and said that I would be alright. When we finally drove away, my driver could obviously tell that I was sad and started asking me questions. He asked whether she was my grandmother and I smiled and told him that she was my host mother. I spent the rest of the ride telling him all about her and how much I looked forward to coming back here (might have shed a few tears along the way).

As I sign off for the last time, I can’t say до следующего раза (until next time) anymore. The last thing I said to my host mom was увидимся! (I will see you) and I hope this statement holds true, wherever my life takes me next, to Saint Petersburg, to my favorite pasta bar, to the Central Asian market, to the 24-hour flower shops, to the 181 bus to Smolny, to Russia, to my host mom.

This entry was posted on Monday, June 18th, 2018 at 3:55 pm and is filed under Justine in Russia, Spring 2018. You can follow any responses to this entry through the RSS 2.0 feed. You can leave a response, or trackback from your own site.

One Response to Justine in Russia: My Friend, My Host Mom