Justine in Russia: Midterms and Moscow!

Midterms and School Trip to Moscow!

Hi everyone! I am currently writing from Saint Petersburg, but so much has happened that I decided to back track a bit. It’s been a long time since I have written anything, but this is because I have been extremely sick and also caught up with midterms at the same time. I had to makeup seven school days of homework and readings for five classes, including two quizzes. Thankfully, everything including midterms went okay and I am not too behind in all of my classes.

Although, I am picking up Russian grammar and conversation quite alright, I still feel like there is a gigantic gap between my knowledge in grammar versus my knowledge of vocabulary. I feel like I am in a good place in my grammar class, but conversation class is really where I start to lose it a bit. The class moves a little fast for me and I am unable to pick up all the new words thrown at us within one class period.

I was really worried about my Russian Conversation class since it was an oral exam. Whenever I am called on in class, I just feel the entire class come to a screeching halt because I am usually confused. I actually received my mid-semester grade for my Conversation class today and I am hovering around an A-/A, so I am very pleased with that. I think all of our professors acknowledge that we are working really hard for our class and they are patient with us when we are confused during class.

After the whirlwind week of midterms, CIEE took us to our trip to Moscow! When I mean right after, I literally mean 5 hours after our last exams. We traveled in an overnight sleeper train from Saint Petersburg to Moscow. We arrived about 9 hours later and we were ready to start our three-day weekend in Moscow! I have to admit that I never really looked into Moscow in terms of traveling and had no idea what I was going to see there besides the Red Square.

We first went on bus tour around the city where we stopped by the embankment near the Kremlin. After that, we were taken to Red Square for a lunch break where I was surprised to find out that the fancy shopping mall in Moscow (ГУМ) was located right across Lenin’s Mausoleum on Red Square. The juxtaposition of these two structures instilled a stronger opinion for me regarding Moscow. Here you have a communist revolutionary and directly across from this mausoleum lies a department store selling extremely expensive brands like Dior. One of my professors talked about this when we came back from our trip and called it “Russian inconsistency”.

Fast picture of Lenin’s Mausoleum because people are not allowed to stop there for a long period of time unless you are lining up to enter it.

Picture of ГУМ at night.

Our second full day of Moscow consisted of a tour of the Kremlin. Unfortunately, I do not have much to say about it besides that I was intrigued by the size of the area. The term “Kremlin” itself actually means fortress. Our four-hour long tour consisted of visits to different buildings including the Dormition Cathedral and the Kremlin Armory Museum. Unfortunately, we were not allowed to take photos inside some of these buildings, but it was indeed an interesting place to be.

Outside the Dormition Cathedral at the Kremlin.

I think my favorite part of our Moscow trip was going to the Museum of Cosmonauts. I do not really have a big interest in space, but it felt like nostalgia to me. I have been to the National Air and Space Museum a few times in D.C and I just felt like I was a child again. If Russians view this museum the same way I do for the museum in D.C, I am sure that it brings them the same feeling of nostalgia and pride in their country. 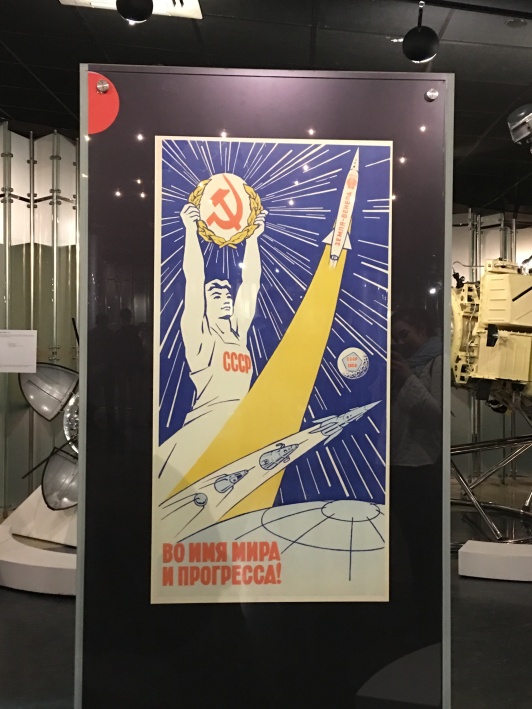 Poster from the Soviet Union that says (at least the way I interpreted it), “For the sake of peace and progress!”

I think going to Moscow was an important and necessary trip for our group because there are many big differences between Saint Petersburg and Moscow. I also understand that it is a little difficult for us to make quick judgments regarding Moscow because we were only there for 2.5 days. As part of our discussion in our Russian Civilization class, we all shared our opinions of Moscow and held almost the same opinions regarding the city. Although we all felt a little more comfortable with speaking English in Moscow, we found more comfort in Saint Petersburg. This is not only because we have been here for longer, but the atmosphere feels a little more welcoming for us. Moscow feels more like a business center with many tall buildings, while Saint Petersburg feels a little older because of the types of buildings we are used to.

I know I definitely want to return to Moscow and take another trip to build a better opinion of the city, but for now I will end with an obligatory picture of Saint Basil’s Cathedral.

До следующего раза (until next time)

This entry was posted on Friday, April 13th, 2018 at 11:27 am and is filed under Justine in Russia, Spring 2018, Uncategorized. You can follow any responses to this entry through the RSS 2.0 feed. You can leave a response, or trackback from your own site.