I’m back in the United States now. There are times when that’s still not real to me yet; you could say that my head carried some of the fog home from Edinburgh and it hasn’t quite cleared yet. In the midst of the readjustment and the holiday season, however, I’ve been reflecting on what I’ve learned from my past few months abroad. Here are ten things I’ve learned about travel, about myself, and about life, in no particular order! 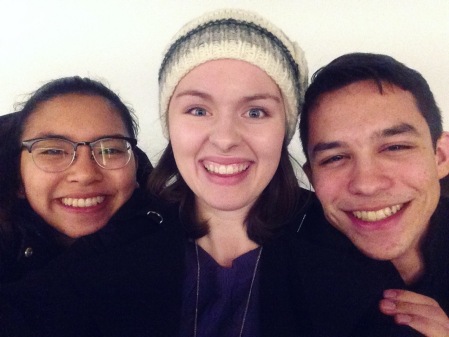 Here are two of those people for me! My Friends Gianna and Tyler and I share similar faith backgrounds. As brothers and sisters in Christ, that gave us a strong bond and helped us be there for each other when we needed it. It makes saying goodbye harder, which is what we were doing in this picture, but it’s still a treasure to know that I have these family members praying for me in their own corners of the world.

9. Feel what you’re feeling and don’t let anyone make you feel bad for that. I’ve talked a lot about this, but I’m still learning the importance of this now as I go through culture shock returning to the US. Wherever you might be, don’t tell yourself what you’re supposed to be feeling or not feeling; think, talk, create, whatever helps you to process and understand what you’re feeling, rather than become desensitized or let emotions build up. That will only hurt you and keep you from growing!

10. Travel makes some things less scary than they were before and does the reverse with other things. Before studying abroad, I was much more scared of traveling alone or living in a city where I didn’t know anyone than I am now. So many of the logistical things that intimidated me so much before no longer do so. To explain the scarier things, though, I’ll tell you a story.

On my last morning of my trip to Paris, I realized something. I had decided to go to Notre Dame before flying back to Edinburgh. I had already been inside once, but it was just so beautiful, and it seemed like a good place for sorting through all the things I was feeling on that particular morning. I walked alone through the streets, over the bridges, past the cotton candy clouds, until I got to the imposing cathedral. As I sat inside, it hit me: I’m less scared of staying here, in a country where I don’t even speak their language, than I am of going back home.

It seemed so strange. I could never have seen myself saying something like that just a few short months ago, and why should I be so scared to go home? Well, there were a lot of reasons for that—I was terrified of how I might feel while readjusting to life at home—but so much of that fear was because I’m not the same person I was when I left the United States back in September. I have become someone new. This new person is more independent while simultaneously knowing how much she needs people; she’s not afraid of traveling alone, she’s experienced so many new things, and she’s been through the refining fire of heartbreak. That morning, much of what weighed on my mind was how to be this new person in the old, familiar places, around people I already know. Would I be able to be a new person and still keep the friendships I had before? I knew that this was something many study abroad students face, but in that moment it still felt impossible.

I sat in the cathedral for a few more minutes, soaking in the atmosphere of the sacred space. I pulled out my phone to read a little bit of Psalm 84, which talks about the sanctuary of God’s presence and how blessed those people are who trust in Him even through the difficult times of their journey. What came to me then was a glimmer of peace: a sense that, while it would be difficult, I wouldn’t be alone. I recalled my belief that the same God to whom this awe-inspiring cathedral was built would actually be with me all the way across the ocean. If anyone can handle the impossible, it would be Him. As I walked back out into the rosy morning, I felt the strength I had drawn from what I believed to be God’s presence in that place stay with me, pushing me forward and into the unknown. With Him beside me, I can face the old and the new, and there’s no telling how far I’ll go. 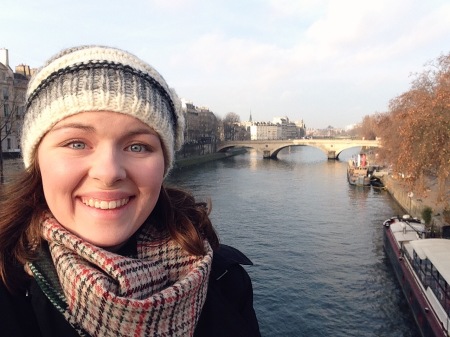 That’s all for my life lessons, folks! We’re coming to the end of this final blog post. If you want to hear a playlist of all the songs from my blog post titles this semester—because all but one of my titles were from songs—you can listen to that here! (Good on you if you caught on to the song titles trope already.)And now, I’ll close this post with a few pictures from my last days in Edinburgh, where I took pictures of some things I would miss about the city. I loved living here so much and will definitely be back someday soon. 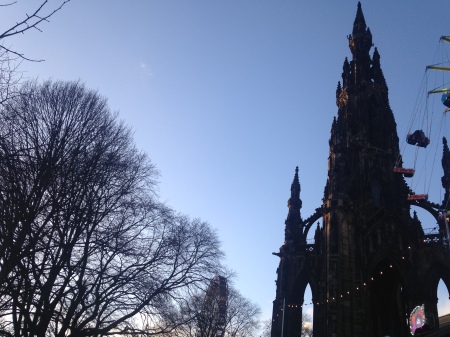 Bustling Princes Street and the majestic Scott Monument, with or without the Christmas Market 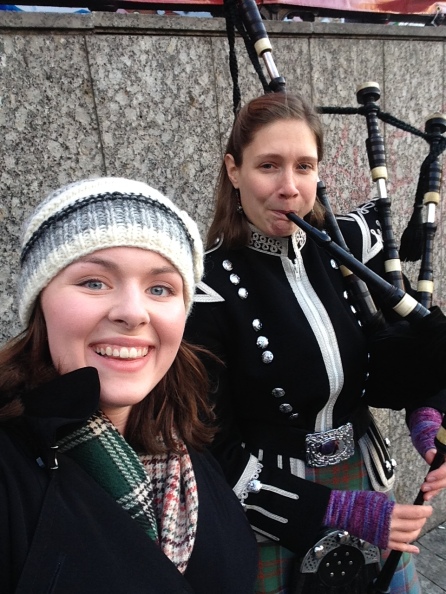 The bagpipers! They may be there for the tourists, but I love the atmosphere they give anyway. 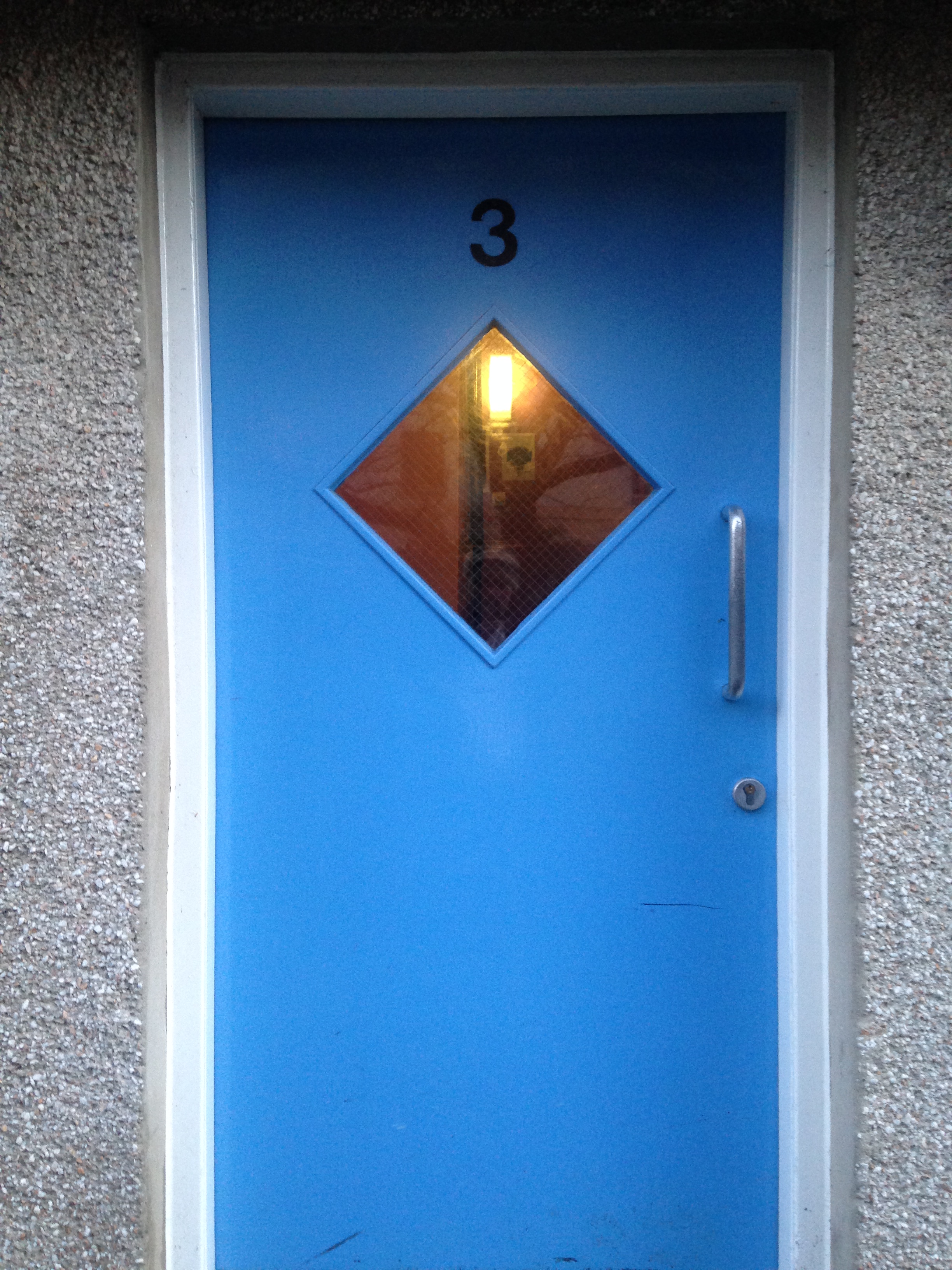 The colorful door to my flat! 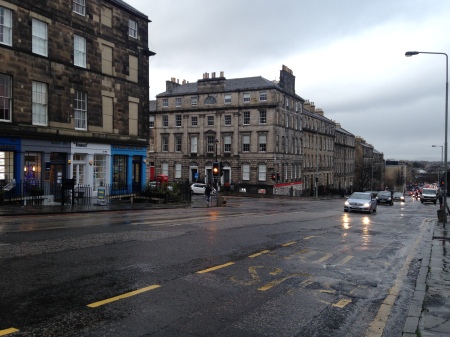 The Georgian architecture and general feel of New Town, where I spent a lot of time with my church. 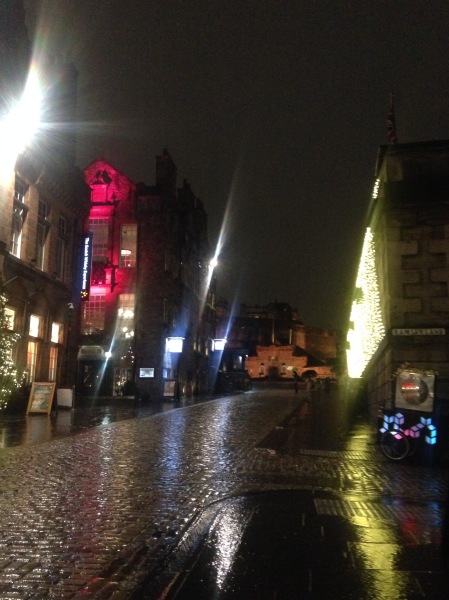 Lovely Old Town and the lights on Edinburgh Castle at night! 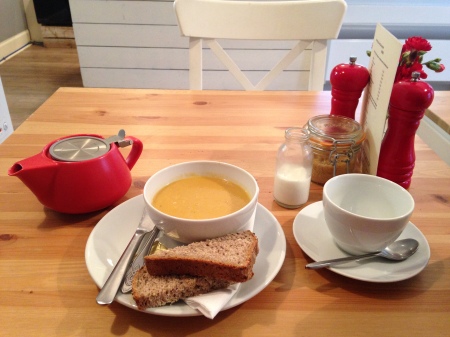 Possibly most important: THE TEA!

Thank you for being a part of my journey this semester! I hope you’ve been encouraged to explore, to feel, and to appreciate the people and places around you, whether you’re at home or abroad.

As the Scots would say—cheers!

This entry was posted on Thursday, January 12th, 2017 at 4:20 pm and is filed under Fall 2016, Olivia in Scotland. You can follow any responses to this entry through the RSS 2.0 feed. You can leave a response, or trackback from your own site.

One Response to Olivia in Scotland: How Far I’ll Go