OKAY, SO VERY EXCITING NEWS! I Facetime my mom pretty often while I’m here since it’s so easy without the usual time difference while I’m in Richmond, as she’s in Okinawa with my younger brother, Tyler. Well, she has met a couple of my friends here via Facetime including Patrik. She knows how close the two of us are and knew that Patrik had nothing planned for winter break. See, Patrik is staying here for a year so he has about a three week winter break to do anything. Well, I’m going back home to Okinawa from December 22nd – January 5th before heading back to Richmond and…

My mom invited Patrik to come with me to Okinawa and he had to get approval from his parents AND HE JUST BOUGHT HIS TICKETS THIS PAST WEEK! HE’S GOING BACK HOME TO OKINAWA FOR ME AND I’M SO EXCITED!! I’m sorry for all of this excitement but it’s just…I’m so happy. We’re going to have so much fun. I get to show him where I grew up during high school and he gets to try Okinawa Soba and Milk Zenzai and all of the other Okinawan food that I love. I told him we’re going swimming at the beaches; I don’t care how cold the water is, we’re still getting in the water. We’re going to chill on the seawall. I’m so excited. You have no idea.

Another thing that made our day even better…after he bought the tickets, we started walking back to our dorms. I was talking to him about chilling on the seawall as someone passed us. This woman immediately turned around after hearing the word “seawall” and asked me if I was talking about Okinawa. I told her I went to high school there and she told me that she graduated from Kadena High School, the rival of Kubasaki High School, my school. I was shocked. I asked if she was a student here and turns out, she’s a professor! I told her that Patrik was going back with me this winter break and she told us she’s going back too. It was a great moment. Everyone from Okinawa understands how close everyone is, especially with the military life. I CAN’T WAIT TO GO TO OKINAWA WITH PATRIK!

Remember last week how I mentioned we had a speech to give in Japanese class? Yeah, it went very well! I snapped a quick picture of Patrik giving his speech. If we used difficult vocabulary in our speech we had to put it on a slide and show it to everyone so they would know the English translation. Patrik talked about the culture shock he felt when coming to Japan. For example, how kind and helpful Japanese people are. I didn’t provide a slide of difficult vocabularly words because the Japanese words I used were words students in our level should already know, or so I thought. I talked about Japanese vending machines and how they sell hot food and drinks, and the convenience of selling iced black coffee, since they don’t have that in the states. After a speech, the students have to ask the speaker questions. I had about seven questions related to vending machines directed towards me. Just as I was about to thank everyone for listening to me, Will, one of my classmates, raised his hand to ask a last question. He asked me what 自動販売機 meant…he didn’t know the Japanese word for vending machine. Everyone started laughing. Here I am talking about vending machines and everyone asking me about vending machines and poor Will didn’t know what I was talking about. 亀井先生 (Teacher Kamei) laughed as well.

Cool Japan, a show on NHK that promotes Japan’s “creative industries” to foreign countries, came to campus and asked for international students to give two hours of their time to watch popular Japanese YouTube videos. After every video we had to write down our comments and rate the video. Between videos the camera crew would walk around and quickly interview students, getting our opinion on Japanese innovations. They had us watch videos on bullet train, PPAP (if you don’t know what this I recommend looking it up), bentos, and raw squid. We had to watch 43 videos. It took a while but it was interesting trying to understand why certain videos had millions of likes in Japan and even outside of Japan.

On Wednesday, there is no early Japanese class so Patrik and I decided to sign up to go to Omagari Elementary School to hang out with the students. The Division of Research and Community Outreach (RCOS) puts out events weekly for international students to participate in. Most of the events include going to elementary/middle schools and talking to Japanese students. 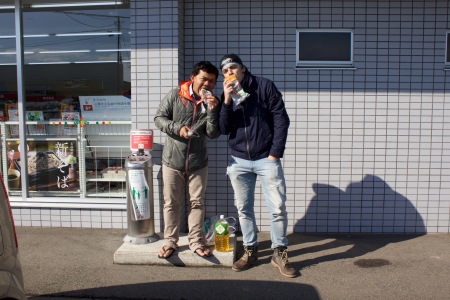 We got to the school an hour early so Patrik, Okka, and I walked to a nearby grocery store to get some breakfast. It was super cheap. We were able to buy a 2L bottle of tea for less than￥100. We bought a couple of riceballs and some sweet bread then headed back.

We were directed into the gymnasium and seated in front of all of the students. The students welcomed us by all standing up and singing a song to us. They were all so cute. Afterwards, we each had to introduce ourselves and introduce our home country with the file book we made ourselves. Of course, we had to do it in Japanese. It was a challenge but very fun to try out. Patrik stole my camera and ran to the back to snap a picture of me introducing the US to everyone. The kids yelled with excitement when they saw the pictures of the hamburger and pizza that was already included in the file book.

After we all introduced ourselves, we played a couple of games with the kids. The teachers all stood around and announced what games we were playing. We played Rock, Paper, Scissors first. I was so confused as to how they were paying but I understood towards the end. Everyone runs around while the music is playing and once the music stops you have to find someone to go against. The loser has to put their hands on the winner’s back and follow them around when the music continues playing. The winner runs around and looks for someone to go against once the music stops. The loser then goes behind the winner again. This is repeated over and over again until there are two winners left. You can imagine how hectic this is because the winner’s lines of kids behind them increases more and more with each win. Whoever wins gets to walk around the entire gymnasium with all the kids behind them. It was so funny seeing us, the older international students, following the winner in front of us and having more students behind us. The kids were too short to put their hands on our back so we all had to bend down!

The school provided lunch for us and it was quite delicious. Two students from each classroom had to bring our lunch trays to the classroom. Patrik and I were assigned to the same classroom for lunch so we followed the students there. I was surprised to find out that we were served the same amount of food as the elementary school students. The rice bowl was filled up only a quarter of the way. We were served a vegetable soup, gyoza, and some type of noodle and meat mix. We also drank milk with our lunch. I used to drink milk with every meal when I was younger but I haven’t in a while so it was interesting. The milk actually tasted really good.

Patrik ended up getting more food since it wasn’t enough. Funny because when we got back to campus he immediately went to his room to get more food because lunch wasn’t filling enough.

I snapped a picture of the students’ backpacks. This is a typical Japanese backpack that you see in アニメ (Japanese animation) or 漫画 (comics). I used to have one because my mom made me attend Japanese Elementary School for a month every time we visited Okinawa during the summer. I had to wear a uniform but these students didn’t have to…quite envious. 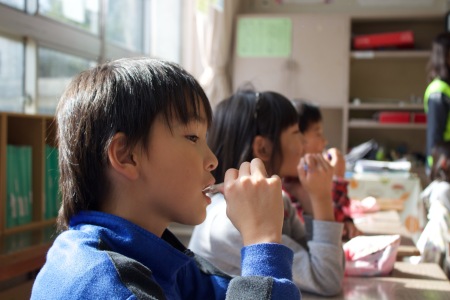 Can you believe the students brush their teeth after eating lunch? Some kids didn’t even use toothpaste. The teacher told everyone to sit down and start brushing their teeth as she played some listening video in the background. Patrik and I sat there smiling at each other while watching the clean and healthy children.

After lunch, we headed back to the gym to say bye to everyone. The kids made a tunnel for us and it was the sweetest thing. Again, since they were so short we had to bend down the entire time we ran through the tunnel. It was uncomfortable bending down for that long so I ran through the tunnel as fast as possible to get to the end quickly! I had such a wonderful time so I told Patrik we should sign up for another one. We’re going to try going to RCOS tomorrow and sign up for another Wednesday morning/afternoon one.

Unfortunately, Patrik and I have been stuck in the IT lab all day working on our papers. Fortunately, my paper has to only be 1500 words long; Patrik has to write a 4000 word essay. I actually just finished and left to go back home. Patrik wasn’t even half way through…he’s probably going to be stuck there all night. Poor guy. His paper is for his Japanese Literature class and my paper is for my Japanese Premodern History class. It’s our last long paper for the semester! We still have to write short papers for the discussion forum and come up with our final project. I should probably start coming up with an idea for that considering the semester is quickly coming to an end.

This entry was posted on Thursday, November 10th, 2016 at 7:58 pm and is filed under Naomi at Akita. You can follow any responses to this entry through the RSS 2.0 feed. You can leave a response, or trackback from your own site.