Soooooo, it’s definitely been a while since I posted anything. I have a super compressed semester (like, half the time or something? Ten weeks??), and the crunch is sort of unbelievable sometimes. So here we are, and I really do want to write about a lot of stuff! But I suppose I will start with my drawing class’ trip to Isola Maggiore, a little island out on a lake not too far from Cortona.

There’s the lake in the distance! 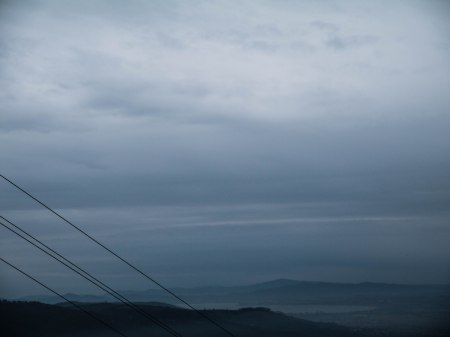 Fair warning, this post might be a bit over-detailed and boring, mostly because I just really, really loved this trip. I had a really lovely time.

Our first stop was a little town called Passignano sul Trasimeno right on the shore. Also a very lovely place, where I found lots of tiny enamel pins of American alternative bands from like the early aughts/90s? what.

And then there was a ferry that we had to ride to get to the island itself, which has a permanent population possibly in the single digits.

I just think people are really lovely when they’re looking off of a ferry. Maybe that’s a bit weird. Anyways, here’s a first view of the island itself!

So full of trees and rocks! And there’s a castle (which I’ll get to later, but like seriously, the castle). To be totally honest though, my very first priority was getting myself to the lace museum, which was definitely worth it.

From what I can gather, this is actually a form of Irish crocheted lace, which you can see from the close-ups. Just. Crocheted with extremely thin thread. I totally want to learn how to do it. It’s just so lovely and incredible. I took a bazillion pictures of all the patterns I thought were really cool. To be honest, it doesn’t look particularly difficult in terms of pattern–just… size. And execution. Pretty sure I understand how it works for the most part, but dear lord. Thread thread thread!

There was also a door at the very top of the stairs that led to an empty attic room that I perhaps should not have been in, but it was definitely open, so…?

Back to the lace. Apparently, the woman who brought it to the island wanted to teach the women of the island a viable trade to make a living there in the first half of the 20th century. It’s actually a practice that’s mostly died out by now, but there are still maybe three or four women who still do it. They’re really nice and very skilled. I mean, they’ve been making this lace for longer than my current lifespan several times over, so I suppose that’s not surprising, but damn.

Seriously. How. I bought a piece of her lace since she was selling. It’s a little soft beige piece.

Back to the island. And the great photo opportunities! Just look at the textures of the wood and all this interesting stuff! Is that a fairy ring on the ground? Did the wood grow into a circle that way or is it magic? Or both?? Who knows!

And castle. Which was apparently forbidden. But there was a gate that was wide open with no signs on it that just looked like a road, so half the class wandered over apparently. It’s easy to see why it’s forbidden. The whole thing looks like it’s about to come down around your ears.

And there was this abandoned boat just sitting there?

Anyways. Really cool place. Kind of terrifying. Very fun. Glad I went. Also found lots of nice bones on this island that haven’t been cleaned yet, or I would definitely post pictures. Someday! When I’m not being slowly crushed under the weight of academia maybe!!

Also I made this little watercolor of the landscape. It’s all right, I think! I should have definitely done more actual drawing, but man, the island was just too exciting.

I think I’ve talked enough about this island. Basically, I highly recommend it for anyone like me who likes weird and pretty stuff! And spending some time alone. That was nice too. I’ll leave you with a final view from Passignano sul Trasimeno of the lake itself. They said it would rain, but! We had a really wonderful day.

Until the next time I manage to get enough time to sit down and write. 🙂 Stay determined!

This entry was posted on Friday, October 21st, 2016 at 2:50 pm and is filed under Clara in Italy. You can follow any responses to this entry through the RSS 2.0 feed. You can leave a response, or trackback from your own site.

One Response to Clara in Italy: Isola Maggiore