After a week and two days, it’s still difficult to believe that I’m actually here. Even from what I’ve seen so far, this city and this country are as lovely or lovelier than I heard them described. Where else can you get views like this?

From my day trip to the Borders area where we stopped by the beautiful village of Peebles! 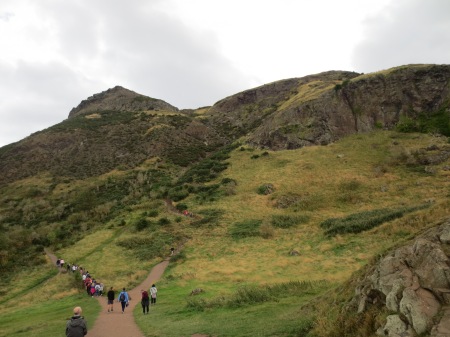 Hiking up Arthur’s Seat, the big hill in the middle of Edinburgh. 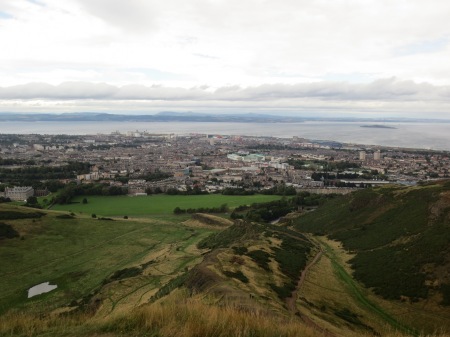 This is a little of what it looks like from the top of Arthur’s Seat! 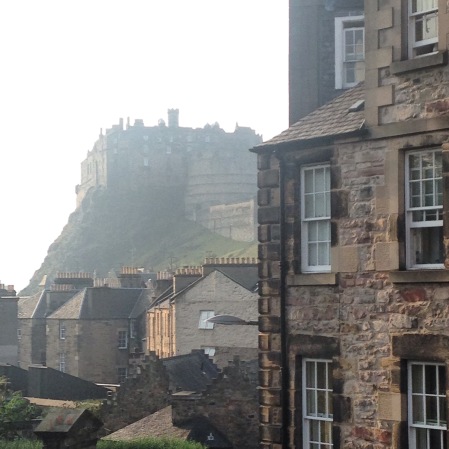 I took this from inside The Elephant House, which is, for the Harry Potter fans, the coffeeshop where J.K. Rowling wrote a lot of the first book! 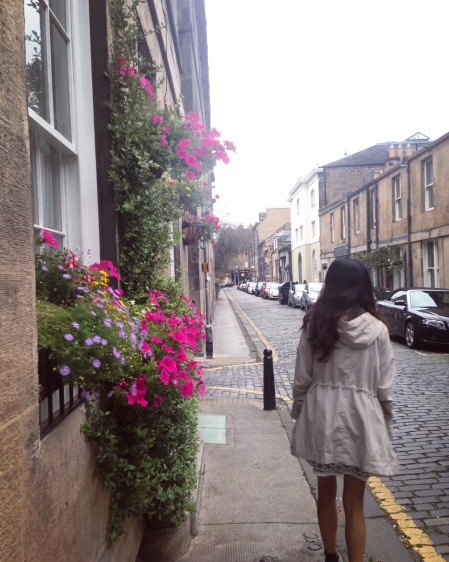 I love how cozy all of the streets look here. Many houses have flowers in their window boxes or front gardens.

I’ve only really done one major tourist attraction in the city so far (Arthur’s Seat). Thankfully, I’ve got the rest of the semester to see the sights. So much of this past week has been about gathering basic necessities, enrolling in courses, meeting new people, trying to get over my jet lag, and generally getting settled. If you’re a student thinking of going abroad, make sure to be gracious with yourself; don’t feel like you have to see every sight of your new city all at once in the very beginning while you’re still exhausted!

I think often what is most striking about a new place is not what is different from one’s home, but what is unexpectedly the same. I’ve seen a lot of similarities over the past week so I’m just going to list some off: 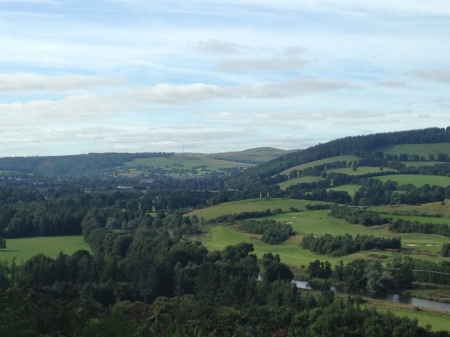 While it’s certainly not exactly like home, to me, it felt like I was in Virginia but with more coniferous trees.

All that being said, there are also a lot of differences from the life I am used to. I’ve never lived in a city before, so I’m still getting used to all of the walking (thankfully, Edinburgh is a very walkable city). There are more people here from other countries and regions than I’ve encountered in one place before. Unexpectedly, I’ve learned quite a bit about cultures other than Scottish culture just in the past week. I became friends with one student from Louisiana who explained the difference between Cajun and Creole culture and told me all about the city of New Orleans. I also became friends with several people of Korean origin and have eaten Korean food more than once since arriving here! I am learning that living in a city means encountering a variety of cultures, and I am loving it.

One difference between American and British culture I have fully embraced: when British people drink tea, they usually eat biscuits (cookies) with it instead of just drinking the beverage on its own. I knew this about the culture already because I have a boyfriend back home who is half English, so when I arrived, I decided to go all out with it. Tea biscuits were one of my first purchases here, and I’ve taken to drinking no less than two cups of tea per day with them. I’ve been an avid tea lover for a long time, so I feel rather like I’m able to fully be my true tea-drinking self here!

To close this post, I’ll share a little of what the most special aspect of this trip has been to me so far. I thought that it would take me a while to make friends in Edinburgh, especially friends who would really care about me. To my surprise, I’ve made good friends incredibly quickly. This is entirely due to the Christian community here. I’ve found that having one thing in common with other people—particularly having faith in common—can bond you together with them very quickly, whatever your other differences might be. I’ve certainly talked to people who are different from me in this area as well and I value those conversations very higly, but it has been very sweet to see how faith creates a family. I can’t wait to see more of this as my trip goes on.

Part of my Edinburgh family! 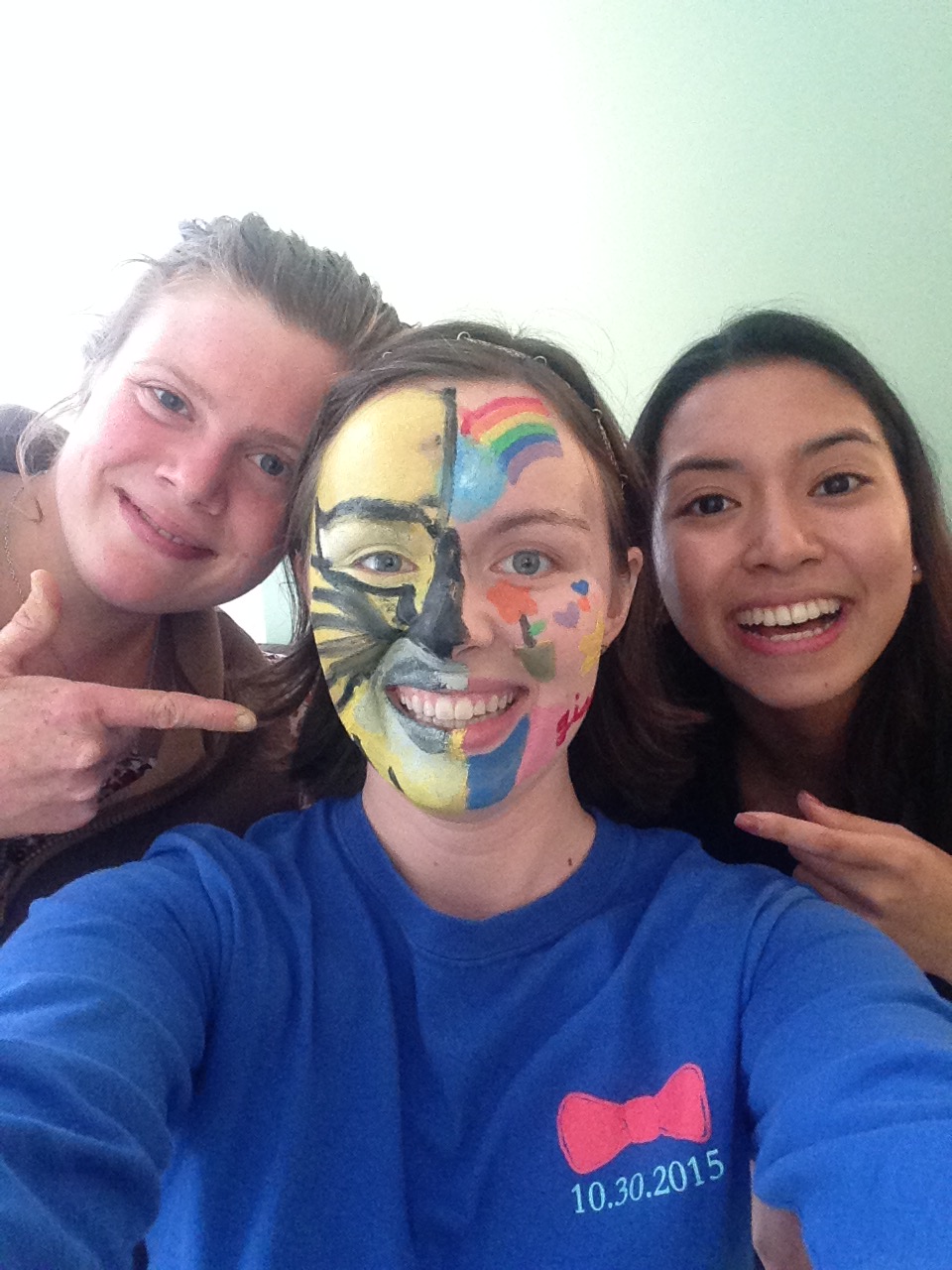 Because family is also crazy and sometimes they paint your face.

Welcome week was great; now on to classes!

This entry was posted on Thursday, September 22nd, 2016 at 3:52 pm and is filed under Olivia in Scotland. You can follow any responses to this entry through the RSS 2.0 feed. You can leave a response, or trackback from your own site.