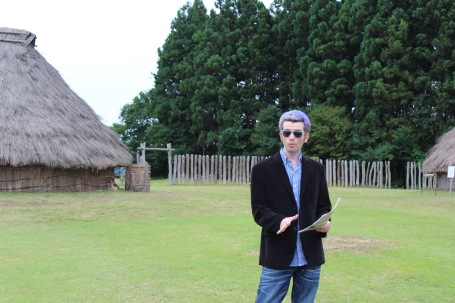 On Monday, my History of Pre-Modern Japan class took a field trip to the Yayoikko Village in Goshono – about a 15-minute drive away from the school. The Akita City Board of Education excavated this Jizouden Site, from Jomon and Yayoi Periods, in 1985. Four pit dwelling houses were found but only three were restored. The style of the houses is called “Kabe Tachi Shiki” which stands for Wall-Stand Type, as you can see in the two pictures above. Professor O’Reilly (pictured above – yes, he has blue hair) actually told us about 50 people lived in each house, which I found to be unbelievable. Our class consisted of about 30 students and when we all went into one house, it was already too stuffed. There was a small museum near this site that exhibited pottery, stone tools, and clay figurines. Some of the pieces of pottery we saw were used as children coffins and several clay figurines found were used as good luck. 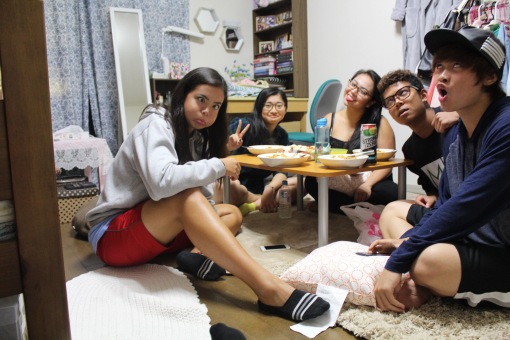 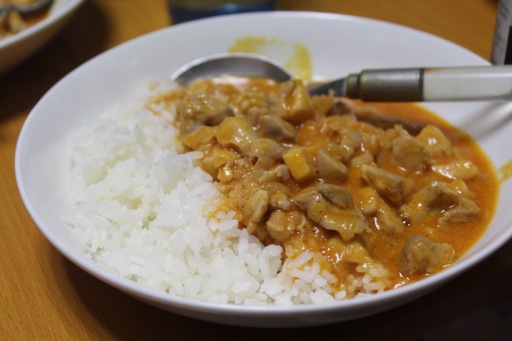 After a long day of classes and napping, our friend Isabella invited us over for dinner. She lives in the University Villages so her kitchen and bedroom are very spacious even though it’s only two people to an apartment. Isabella is actually half Japanese, a quarter Brazilian, and a quarter Italian so she made us Brazilian Strogonof with a side salad. とても美味しかった！We all ended up lying on the ground, listening to music, and teaching each other different words in different languages – Japanese, English, Portuguese, Slovak, etc. I’m telling you guys, you meet people from around the world when you study abroad. People from various countries meeting up in a small, close-knit community in Akita International University talking about things ranging from differing prices of beer to conflicting habits among cultures. 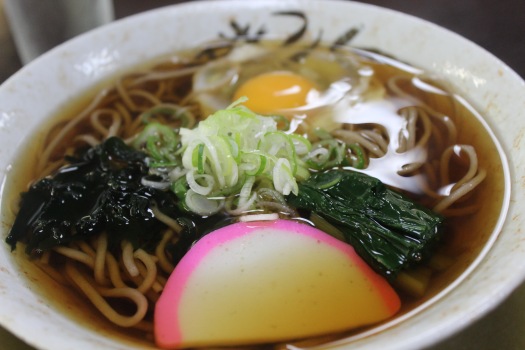 On Saturday, the school organized a day trip for all of the new students, including international and first-year students. The day consisted of going to a historical Japanese town full of samurai houses in Kakunodate. This historical town was first located in Mt. Furushiro. However, due to floods and fires, the town relocated to Kakunodate, an area with natural terrain, surrounded by mountains. The town is actually split into two parts between Hiyoke (fire shield): the samurai district and merchant district. Before we walked around to look at samurai houses, shrines, and temples, we decided to get something to eat, as none of us had eaten breakfast yet (we had to check in for the buses at 8am). We found a tiny restaurant that served soba, udon, and ramen. I practically inhaled my soba (pictured above); I’m sure you can guess what the best part of the soba was. We ran into a couple of souvenir shops as well and as you can see above, Okkasan had a grand time with a traditional Japanese straw hat. 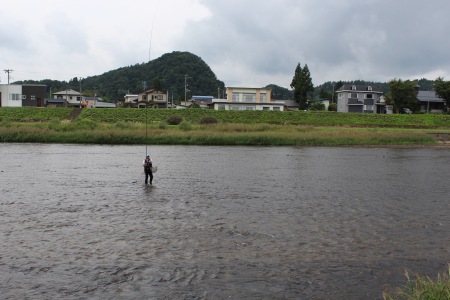 After eating, we headed towards the samurai houses that didn’t require an admission fee. We walked along a narrow street called Bukeyashiki-street – designated as a preservation district for nationally important historic buildings. Bukeyashiki translates to warrior mansions. The first picture is of a well from the Iwahashi Samurai House, which was a typical middle-class samurai house. We ended up walking to the front of a shrine, pictured above. Unfortunately, we were unable to go in, as a monk made an X with his arms. We kept walking and passed the Boshin War Graves as well. Of course, I did not take any pictures, as that is seen as disrespectful. As we had to head back towards the buses for our next destination, we walked across the Uchikawa and Yokomachi Bridges, passing several fishermen. The picture above of the fisherman was taken almost two seconds before he caught the fish. Takao, the guy with the grey shorts and glasses, saw the fish flying around. Naturally, we all clapped and the fisherman started smiling. 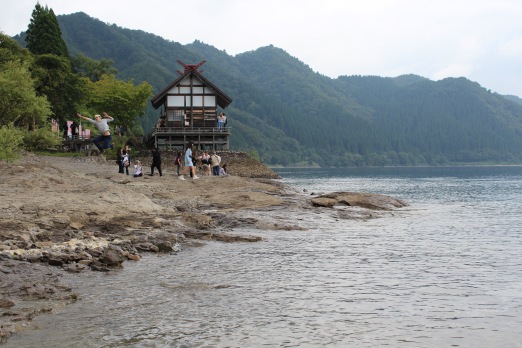 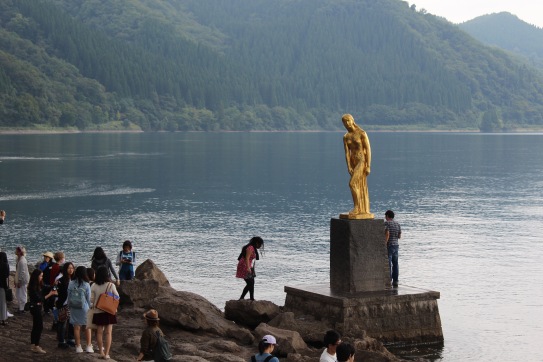 One of our last destinations was Lake Tazawa, the deepest lake in Japan – 423.4m deep! The statue pictured above is the Statue of Tatsuko. There’s actually a legend behind her and it’s quite confusing. Apparently, Tatsuko, a very beautiful girl living by the lake, wished to retain her beauty forever. So, the god told her to drink the water from a spring in a nearby mountain. She did what she was told but instead, became a dragon. She then lived in Lake Tazawa regretfully. That’s it. It’s very interesting and short. Anyways, the lake was very beautiful and calm. Some of the students started skipping rocks. There were a few fish jumping out of the lake. Unfortunately, a lot of fish have become extinct due to agricultural promotion but there were still a few swimming around. After the lake, we headed to Ando Jozo, a store specializing in miso and soy sauce. They even had soy sauce soft cream – it tasted like caramel. By the way, look closely at the first picture…do you see Patrick? I yelled at him to jump and this is what happened.

This entry was posted on Monday, September 19th, 2016 at 2:24 pm and is filed under Naomi at Akita. You can follow any responses to this entry through the RSS 2.0 feed. You can leave a response, or trackback from your own site.