Maddie in Ireland: The Devil is in the Details

It’s the little things like not knowing which brands of bread are good or forgetting that dates are written in the day-month-year format that getcha. They’re the little things that trip you up and remind you that, oh yeah, you aren’t home; and since the internet is all about lists, I have decided to compile a list of those little things, those little differences, that I have noticed during my first two weeks in Ireland.

So you know in middle school how Hollister graphic tees were the thing? Like, grab a shirt from Hollister and presto, you’re instantly the coolest kid in class? And then a few years later Hollister was just kind of out? Well, Hollister is not out in Ireland (at least in the male population). Everywhere you look there is a boy wearing a Hollister hoodie, carefully zipped only halfway up to subtly reveal the Hollister tee underneath… unless, of course, said boy is wearing an Adidas track suit. You know the kind I’m talking about. In summary, the entire male population in Ireland either looks like your eighth-grade class or like they just came straight from soccer/football practice. Its not a bad look, it just kind of throws you off for awhile, makes you look around and think “Something is different about these boys,” until you realize that they’re wearing exactly the same thing that Yanni Thanopolous my…I mean your… crush wore in seventh grade.

On the subject of differences between American and Irish boys, I’d say 70% of Irish guys have some version of an uppercut. Again, its not a bad look— in fact, I’d even argue its a darn good look— it’s just different.

The first time I entered a grocery store it took me 45 minutes to buy bread, cheese, gnocchi, and a candy bar. Why was I such an deficient shopper? Because I didn’t have a single clue about what I was buying. I didn’t recognize a single brand in the entire store (except for international brands that I only recognized because the logo was the same. For example, Lays chips are known as Heilmans chips. Go figure). Was this a good brand? Was this a yummy brand? Is this the hippie, vegan brand? Am I giving off an air of hippie, vegan-ness by buying this brand? I’m not a vegan though… I really like pork. And beef. And cheese. Aww man, I’m so out of my element here.

Real quick I’m going to tell you an absolutely thrilling tale about my first hour in Ireland: When I landed in Shannon two weeks ago, my phone was dead. 0%. I knew my wonderful, loving parents would be worrying out about my safety and the longer I didn’t call them the more they would stress out. I don’t like stressing my parents out. It’s just not a thing I enjoy, so I frantically ran around the airport looking for an outlet. I found one, plugged my phone in, and waited. After about fifteen minutes, I checked my phone and it had not charged a single bit. At this point I was freaking out— was the adapter not working? Had my charger burnt out from the voltage? Why was I so bad at technology? I saw a flip next to the outlet and even though I was 75% sure if I touched it I would kill the entire airport, I decided that my first world problem of a dead phone warranted me taking that chance.

Yep, turns out that electricity doesn’t automatically go to every outlet. You need to flip a switch to direct the electricity to the outlet and then do ~whatever~ you do with the electricity…. Hmmm, looking back, I now realize I didn’t need to preface that bit of info with my story, but, hey, I’m sure you’re super bored and have nothing better to do than read about my minor, insignificant, amateur observations. Right?

Pulp in orange juice. We all have opinions about it. I, for instance, am a firm supporter of the “Pulp is absolutely delicious and should be included in all juice” camp… but when I first went looking for juice I could find no evidence of “pulp” vs “light pulp” vs “no pulp”. Where was the conflict? How was I supposed to get in a fight about what texture juice should be? After a hasty conversation with a grocery worker, I was informed that the Irish referred to pulp as “juicy bits”, which I find to be absolutely hilarious. “Cream cheese” is called “creamy soft cheese”. A “half pan” is a small loaf of bread. “Tap” doesn’t refer to fresh beer, which is just called beer, but instead a water faucet. “Joggers” are all sweat pants, not just those used by athletes. “Bonbons” are toffee-type candies, instead of chocolates. I could go on. Either way, each trip to any store is an adventure and experiment, because frankly I am very rarely aware of what exactly it is I’m buying.

In America you walk on the right side of the sidewalk. It’s etiquette. In Ireland you walk not on the left, mirroring how the roads work, but just wherever you decide to walk. This means you need to be much more aware of your surrounding and who is approaching you from each direction when you walk. No zoning out allowed. It’s etiquette.

Its also means you need to size up anyone who walks towards you and decide which of you is going to move. Every stroll is a power struggle

We’ve been over Irish boys’ appearances, but we haven’t talked about the girls yet. For the most part they dress pretty similarly to how we would have dressed in America (but in Ireland, out of our natural habitat, we tend to wear significantly more jackets than they do). Makeup though. Irish girls are masters of makeup and it doesn’t matter how little sleep they got, how few people they are going to see that day, whether they’re just going to the grocery store or mechanic’s shop, they will step out of their apartment with flawless, full-on makeup. Props to the Irish ladies, that requires some energy and effort.

When we navigate schools, classrooms are generally referred to by the building and then the room number. In contrast, at NUI Galway almost every single classroom has its own unique name. No “North Court 213”s or “Booker 156”s, only “D’Arcy Thompson Theater”s or “Cairnes Theater”s. Frankly, its awesome and each room feels so special and fancy-schmancy.

There are a ton of baking shops around Galway. I don’t mean bakeries, I mean shops that sell cake decorating tools and cute aprons. Apparently there is a huge audience for cute cupcakes in this area and I have absolutely no problem with that being the case.

Just a small observation, but Irish college— or should I say university— students, use their phones significantly less than American students do <shrug>.

When American students go away to college, they’re gone for months at a time, only returning for holidays. Irish students— and I’m being completely serious here— return home every single weekend. Every Friday you can see all the twenty-somethings carrying their roller suitcases to the train station, returning to their mammy and her home-cooked meals. Tbh, I would do the same thing if I could.

You’d think something like “prices” wouldn’t fall under the umbrella of “details”, but I couldn’t leave it out. Things are so cheap here. Guess how much I just paid for a loaf of bread. Go ahead, guess. I dare you. I paid 0.70€. Thats 75¢. For an entire loaf of bread. An entire loaf of delicious bread. I don’t understand it, but I also don’t want to question it.

The only, only exception is the fruit. Coming from California it kills me to pay a lot of money for fruit, but hey, Ireland cant be too perfect, right?

Well, for the moment, th-th-that’s all, folks!

Ice-Cream Eater, Girl Who Can Very Rarely Force Herself To Put on Makeup, Pulp-Fan, Proud Member of the Westhampton Class of ’17

P.S. I feel bad that there aren’t many pictures I can use to accompany this list, so for now enjoy some sneak-peek pics from my recent visit to The Cliffs of Moher which y’all will hear about soon.

Muggin’ it with Oscar Wilde

Muggin’ it on The Cliffs of Moher

Here we see O’Briens Tower, the highest point of the Cliffs of Moher, and a ruin strongly associated with ~traditional~ Irish music for some reason that nobody could seem to provide.

And here we see my friend Murphy leaning off the top of the 400ft cliffs for some reason that he couldn’t seem to provide.

Another pic of those gorgeous Burren shores.

Dangit, I just said Ireland can’t be too perfect. Stop being too perfect, Ireland. 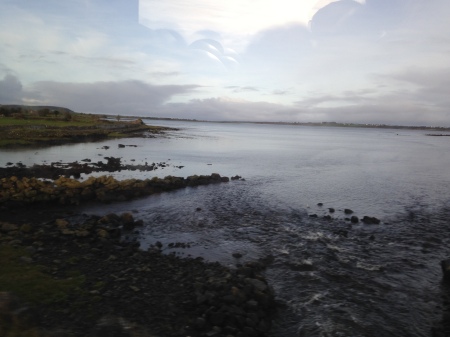 This entry was posted on Tuesday, January 26th, 2016 at 1:05 pm and is filed under Maddie in Ireland, Spring 2016. You can follow any responses to this entry through the RSS 2.0 feed. You can leave a response, or trackback from your own site.

One Response to Maddie in Ireland: The Devil is in the Details