Lindsay in Thailand: Vietnam & Beyond

Please excuse me if I may sound like a broken record, but after my fall break this past week, I still believe “a lack of formal plans or expectations makes for the best adventures.” Little did I know, a lack of a valid Vietnamese Visa does too. And so the adventure begins…

One week before fall break, the scramble began. I entered my program’s student activity room to find my like-minded friends crowded around computers.

Pictures of random places were pulled up on the screens and the air was filled with frantic questions. “Where are you going?” “That looks cool” “Well, maybe we can go there too.” Simultaneously, tabs with destination information all the way from Korea to Singapore with every country in between were pulled up on my computer screen. For the next nine days, Southeast Asia was my oyster, and I had no idea where I was going.

Eventually, after much debate with myself, I decided I would not try to squeeze in the wonder of Angkor Wat or Bali’s beaches, but rather experience as much of one country as I could. Vietnam seemed to have it all, from cascading mountains and quiet beaches to busy city streets.

My only travel transaction was a round trip ticket from Bangkok to Hanoi for most of the week until the rest of the plans eventually fell into place. Before break began, my friend Billy and I inquired about a Vietnam visa from several different sources, including the Thai embassy. We were told that it was possible to get a tourist Visa upon arrival in Hanoi. Little did we know…

We took the overnight bus to Bangkok with several of our friends and arrived at the Don Muang Airport before 4 am—plenty of time to spare before our 7:15 flight. I found out in the check-in line, however, that a pre-entry form was required to enter Vietnam, and that we would not be making our flight. We applied for the rush visa application service that claimed processing took “3 hours at the most.” That Saturday, however, was a holiday. Rather than pay the $200 to get the other available last-minute entry form, we returned to the drawing board. Within four hours, we were on a flight to a southern Thai island, Krabi, and would not return to Bangkok until Monday evening. On Tuesday afternoon, we flew to Hanoi and spent the night there. The next morning, we traveled to Ha Long Bay in Northeastern Vietnam and I eventually met up with four friends to adventure to Sapa in Northwestern Vietnam. Throughout my traveling within Thailand and beyond its borders, I have learned some things and I thought that I would share them with you. 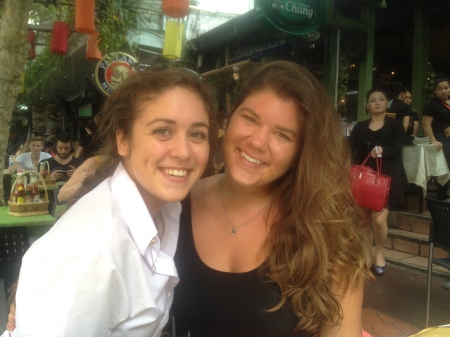 Because of the changes in our travel plans, Billy and I were able to enjoy a meal with Dominiki, a fellow UR friend and Bonner Scholar currently studying in Bangkok.

I brought my birthday cards from family and friends on the trip with me and found the overnight train ride to be the perfect time to read them.

Billy and I at the ‘Overlook’ in Koh Phi Phi, a Southern Thai Island.

Sa Pa, Vietnam- one of my favorite places on Earth. 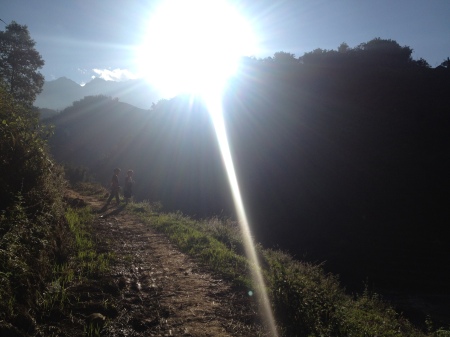 These two children, ages 6 and 8, walk more than one and a half hours up and down the mountain everyday to get to and from school.

Although these Sa Pa Sister guides trek 11 miles up the same mountain everyday, they still take the time to sit and enjoy the view.

This entry was posted on Wednesday, December 2nd, 2015 at 3:59 pm and is filed under Fall 2015, Lindsay in Thailand. You can follow any responses to this entry through the RSS 2.0 feed. You can leave a response, or trackback from your own site.