Kyungsun in Scotland: The Happiest Country In the World

The iconic picture of Denmark: Nyhaven

When I arrived in Copenhagen, I was more excited to see my friend Amaury than the fact that I was in one of the happiest countries in the world. I was just happy to be in the presence of a familiar friend. As expected, it didn’t take long before we skipped the small talk and dived into a discussion about how our study abroad experience has transformed us. It was a warm relief knowing that he had been sharing similar struggles of changing friendships and becoming more independent like me.

The next day, we spent the entire day exploring the city. The best part about having a friend show you around is that you get your own personal tour guide. It was astonishing just how much Amaury knew about Denmark. He knew everything from the current politics to the historical significance of the main buildings. Two places in particular held the most meaning for me. As expected, my pictures don’t capture the full energy of the moment, but I hope I can still convey the spirit as well of the beauty of the city.

The first thing I noticed was the sign. Welcome to Christiana! Once we went under the arch, Amaury told me to turn around as if I was exiting. You are now entering the EU. Huh?

The second sign said that I wasn’t allowed to take pictures.

The third sign said that I was supposed to have fun.

Walking into Christiana was like stepping outside of Denmark. When I first walked around the streets of the Copenhagen, I saw the traditional colorful buildings, comparatively clean streets, beautiful people, and places to shop everywhere. But Christiana is the part of the city that is still not developed and not developed by choice.

I asked Amaury where he had brought me to and he said that Christiana was a community that represented freedom of expression. Indeed, I saw graffiti and color everywhere. Any white space was anyone’s canvas. You can build your own house in Christiana. But no one owns anything. Rather, everything is owned by the community. You are only allowed to live in Christiana if you are accepted by all 850 members in the community. It is also a town that claims that it’s separate from Denmark (hence the EU sign), but not recognized by any formal body.

After moving past the initial front, I was overcome with a tangible sense of peace that filled the area. But when I looked at the various colors and shapes of the houses, I also felt an uneasy feel of chaos. Nothing conformed to the thing next to it. Yet Amaury told me that there is a deep woven bond of community in Christiana that allowed everyone to enjoy a harmonious life. I suddenly found myself questioning the value of standardizing everything from our houses to our education – do we do it for the ease or for the control?

Did I also mention that weed is everywhere? On what is known as Pusher Street, stalls are lined with people selling, smoking, or buying weed (hence, no pictures). The police know this. The government knows this. And the teens at the local high school across the street certainly know this. Yet it’s an accepted part of Danish society. Occasionally there are police raids (which is why you’re also not allowed to run in Christiana). However, my expert tour guide told me that overall, the Danes want to maintain the essence of Christiana for what it is because it represents a part of Denmark’s history.

I left dizzy with questions and confusion. It made me question a lot about the ways in which we as communities and societies achieve things like safety, individual expression, and justice.

Denmark continued to surprise me. Thursday was Queen Margrethe’s 75th Birthday. All I knew was to be at Amalienborg Palace, where the Queen lived, by twelve o’clock. Amaury was unfortunately in class. The morning was pretty calm as I was exploring Rosenborg Palace. Then I saw the band and guards lining up and when I turned the corner, people were everywhere. Little did I know this is where the party started.

It was actually a relief knowing that the guards were kicking off the celebrations with loud fanfare and a parade through the streets. This meant all I had to do was follow them to the other palace rather than stand out as a lost tourist. My favorite part about the parade is that anyone could simply be a part of it. The police encouraged everyone to make way for the guards and band, but a swarm of people trailed alongside or behind the line.

On my way to Amalienborg Palace, I was handed a flag and again, turned a corner and saw everyone waiting to enter. But for some reason we weren’t being let in and the police kept pointing people to the left. I didn’t understand what anyone was saying but I decided to trust my instinct and follow the crowd.

It was a good move because I found the actual entrance! What I loved about the moment even before the celebration started is how energized everyone was to see the Queen. Amaury had told me the day before that the people loved the Queen. When I also asked what the Queen did outside her political duties, I was surprised that Amaury’s host family knew the answer. She apparently makes costumes for plays and paints.

Close up with Queen Margrethe! 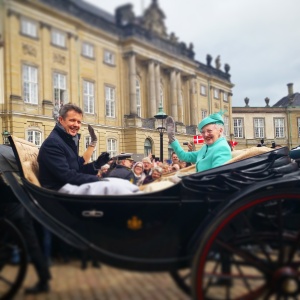 Front row view to see her pass by! 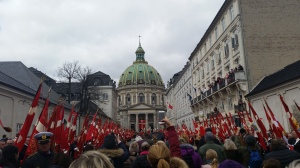 It was an interesting atmosphere to be in – I felt like the Queen was approachable. Even the Palace didn’t have any gates or barriers. You could just walk right up to the front door and knock on it if you wanted. I was told that it’s because the Danish Royalty embody the strange balance of humility and pride that make up the Danish lifestyle.

These two places are sadly only two snapshots out of the near 700 pictures of what I experienced. Copenhagen is a city like Edinburgh in that it has a great mix of nature, history, and modernity. Unfortunately, Copenhagen is also much bigger than Edinburgh. I didn’t get to explore the city fully, but I know I have to come back. As you can tell, Denmark was a place that really made me think about how the country has become such a loved, happy, accepting, humble, yet prideful country and much more. 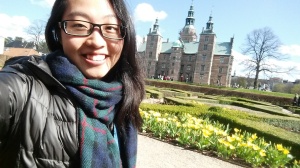 This entry was posted on Thursday, April 23rd, 2015 at 3:52 pm and is filed under KyungSun in Scotland, Spring 2015. You can follow any responses to this entry through the RSS 2.0 feed. You can leave a response, or trackback from your own site.