Jackie in Switzerland: Looking for Audrey and Finding the Sheep

This was the third week of classes here at Lausanne and I am blown away by how fast time is flying by! Now that classes have really begun, I feel like the semester is going to be over before I know it. After much stress and confusion, I have finally figured out my class schedule for the semester! I am taking 7 courses; five are courses about French and Swiss culture, including their literature, art, and films while the other two are political science courses. However, they are ALL taught in French! My professors have been really understanding of the fact that French is not my first language, and sometimes in my political science class, the professor will even ask for my perspective as an American, which makes me feel like I can actually contribute to the course.

I was really nervous that I wouldn’t be able to handle so much French, but so far it has been the best thing about my study abroad experience! I can already tell how much better my French has become, and after only three weeks. One of the most important things that I have learned from this experience is how important immersion is for learning a language. Its just not possible to speak and hear French in the U.S. the way that I can here in Switzerland, and this week I really realized how lucky I am to have the opportunity to come here and not only study a language, but also to live a language. And while sometimes all the French makes my head spin, I wouldn’t change it for the world.

Even with all of my classes, I’ve still found time to enjoy the sunset!

And now to explain the slightly bizarre title to this blog post. In choosing to study abroad in Lausanne, I had unknowingly chosen a place about an hour from Audrey Hepburn’s last home. I am both excited by this fact and also disappointed in myself for not knowing this earlier. As a self-proclaimed Audrey fanatic, I cannot believe that her home has been so close to me and I was not aware. However, I decided to make up for this by visiting Tolochenaz, where Audrey lived during her last years. Expecting to visit an overly touristy, Audrey-themed city, what I found instead was what makes me love this country so much.

The houses in Tolochenaz were all so cute and quaint, I would never imagine such a small city for such a big star

With this view, I could see why Tolochenaz is such a perfect place to live!

It turns out that it takes about 30 minutes to walk from the closest train station to Tolochenaz, and the path is the most quiet, beautiful countryside that I have seen to date in Switzerland. After enjoying our walk with the mountains in the distance, we finally reached the small town, and I could not have been more surprised. It took us about 20 minutes of walking in the town to even pass a single person, and the homes were so beautiful, traditional, and modest that I would never have guessed a star like Audrey Hepburn would live there. As for tourism, the town certainly had a few indications of Audrey’s presence, but in general, it was very tasteful and simple. Much like her modest resting place, I could only describe her home in Tolochenaz as peaceful, beautiful, and quaint.

After 20 years, people still come to Audrey’s grave to give flowers and love 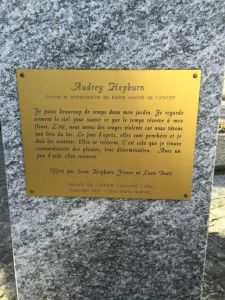 While walking through the town, I realized that while I had come here to see the place where one of my favorite actresses had lived, I got so much more than that. I got a little glimpse into the small things that make living in Switzerland like a dream. On our path, we ran across a herd of sheep, the first that I have seen here in La Suisse, even though before arriving I expected to see this everywhere! As my friend Amanda said “We came for Audrey and found the sheep!”   Every little detail of this little town in this little country had such a character and a beauty in and of its own, and I realized in that moment that one of the best parts of studying abroad isn’t so much seeing all of the tourist attractions or ‘famous’ places, but instead finding the beauty of living like a local.

It took me a month, but I finally found the Swiss sheep! We felt like total tourists taking pictures of sheep but we couldn’t resist

The experience of enjoying such a small place made me realize even more how much there is out there to see. I came to Europe searching for the ‘Audreys’; the Eiffel Tower, Lake Geneva, the canals of Venice, or the beaches of southern France. But the more I see, the more I’m beginning to love finding the ‘sheep’; the vines that climb up the side of an old home, the wonderful smell of real French bread in the morning, or even the beauty of gates and doors on the side streets of Lausanne.

Finding the small beauties in a small city

I will never forget this view!

This entry was posted on Tuesday, March 17th, 2015 at 3:27 pm and is filed under Jackie in Switzerland, Spring 2015. You can follow any responses to this entry through the RSS 2.0 feed. Both comments and pings are currently closed.