Fabiana in China: Adventures in Harbin

Fireworks woke me up. I was on a train heading to Harbin, China on the night of Chinese New Year. 干杯 (“cheers”) and laughter could be heard on the light-less hallway, and as I closed my eyes to go back to sleep, I thought about how lucky I was to be in China for one its most important holidays.

The city of Harbin left me amazed of how China’s panorama can change so abruptly depending of where you are. I had traveled to other cities in China before, but this was the first time I was traveling this north. As I walked through the Harbin streets, I felt like I was in Eastern Europe; the combination of Chinese and European architecture styles puzzled, but charmed me. I had a Chinese monastery on my right and a Russian Orthodox church, Saint Sophia Cathedral, on my left. It was simply breathtaking!

Zhongyang Pedestrian Street, one of the main streets in Harbin, was overcrowded with Chinese people taking photos with the different ice sculptures, buying Russian goods, and eating street food delicacies. It was a spectacle! Although I am pretty sure we were all freezing (I personally couldn’t feel my toes), everyone seemed to enjoy the music played on the streets and the happiness of beginning a new year in such a magical city like this. 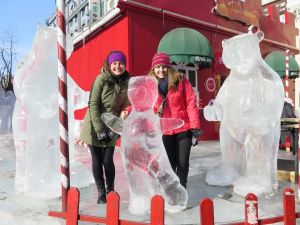 Over the course of 2 nights and 3 days, we got to visit the Harbin Ice and Amusement World, Zhaolin Park (home to the largest collection of lit-up ice sculptures), the Siberian Tiger Park, the Temple of Bliss, and Harbin’s famous Russian district.

As I try to decide what was the part I enjoyed the most of this whole experience, I think about conversations I had with Chinese locals as they tried to figure out the year I was born to match me up with their sons; I think about holding a Siberian baby tiger and hoping his teeth wouldn’t be that sharp, or witnessing the very traumatizing extermination of a chicken by his dad. I dream of that amazing Russian lunch and chocolate for dessert; and how could I forget crossing that 3 kilometer frozen river from a Harbin island to the mainland; and of course the joy of being hypnotized with the sculpture lights! AAGH! Every moment had its own excitement. 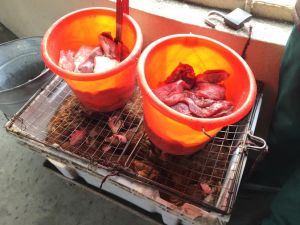 Pay to feed the tigers 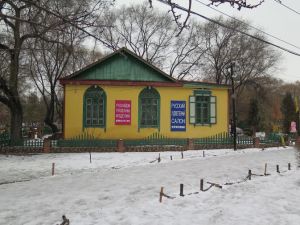 Now, I think back and reflect on the things I have learnt through this adventure. The most important thing I got from it was due to a conversation we had with our Chinese roommate in the youth hostel we stayed in. We were trying to save some pocket money, so my two friends and I decided to get a room for four and have someone else stay with us. She was from the southern part of China and had come to Harbin to fulfill the “Chinese travel dream.” She explained this dream as being able to go to the “most” northern, southern, eastern, and western parts of China. She was staying the night in Harbin and traveling towards the north the next morning.

This “dream” amazed me, really. It made reconsider the type of traveling I have been doing for some years now. I acknowledge I have travelled very little inside my own country, and instead had always tried to go outside of it. I now feel a great desire to go back and really get to discover it. I mean, now that I think about it more carefully, we tend to underestimate the importance of knowing ourselves first. And this, could go multiple ways.

I am grateful for meeting such interesting people and the great stories that accompany them. Now, as I sit back and realize this is my last day of vacation, I mentally prepare myself for my the second and last round. I can’t believe I am halfway through the semester!

Happy Year of the Sheep/Goat!

This entry was posted on Tuesday, February 24th, 2015 at 4:08 pm and is filed under Fabiana in China, Spring 2015. You can follow any responses to this entry through the RSS 2.0 feed. Both comments and pings are currently closed.