Class ended December 18th, so what have I been up to since then? Traveling. A lot. In total I estimate that, without counting my flight back to America, I traveled over 2000 miles. Part of that time was spent with my mom, dad, and brother when they came over for Christmas in Germany. Another large chunk of that time I was traveling for a week with Topdeck Travel Tours on what was called the “Winter Waltz.” Continue reading for the adventurous details!

Christmas in Germany oozes feelings of winter wonderland. Christmas markets, light dustings of snow, and hearty food all contribute to that feeling that your life is a movie. Overall we traveled to Frankfurt, Baden-Baden, Freiburg, and castles near Munich. My top three moments of traveling with my family included the wonderful soup shack at the Frankfurt Weihnachtsmarkt, spending the day in the thermal baths of Baden-Baden, and having the perfect amount of snow on our tour of Linderhof and Neuschwanstein castles. 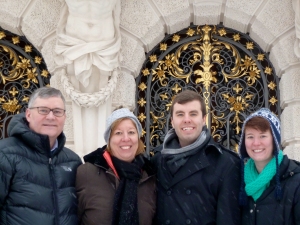 My family at Linderhof castle 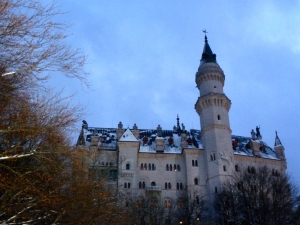 Travel is no easy feat – it is completely exhausting after a few days, even with a more reasonable amount of luggage. I could see my mother experiencing many of the same emotions – the growth and hardships – that I have experienced traveling this semester. Sometimes it makes you emotional for absolutely no reason. In regions where everything is in a different language you can feel lost and confused easily. You keep on going and solving constant problems. Looking back it makes you proud of yourself, but in the moment it’s overwhelming. I was very proud of my parents for making every single train we took and growing as world travelers with me.

New Years was the start of my Topdeck tour. It was quite an international New Years as I was in Prague, Czech Republic, my parents were in the US, and my brother was in Morocco. Prague at New Years is completely hectic. Amateur fireworks are being set off everywhere… even right next to you!! The chaos built up my adrenalin so much that I had to blow off steam somehow. The opportunity provided itself in the form of Prague going up the down escalator of the subway. I was entirely sober at this point mind you, so that wasn’t it. I fumbled my way on and set a blistering pace upwards to the sound of thundering applause. However, my legs turned into jello three feet from the top. Two people from Topdeck tried to reach out to pull me to victory, but alas, I could not take one more step forward. It was a courageous way to start 2015.

The rest of the trip led us to Berlin and Amsterdam for two days each. The highlight of Berlin was going out to a beer hall dressed in drag. It was a girl named Heidi’s birthday and she wanted a gender-bender party! I sampled the absolutely delectable pork knuckle dressed in a bow tie and five o clock shadow. In Amsterdam a ton of things happened including a Red Light District tour and the Heineken Experience with Masnoon before he studies abroad in New Zealand for a semester. The Heineken Experience was amazing!! We learned the history of its founding, the ingredients and process, in addition to getting some free samples and a glass to take home! 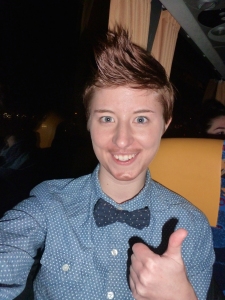 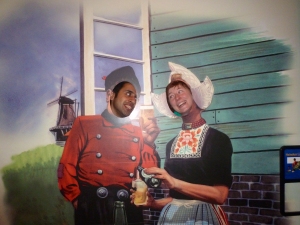 Masnoon and I at the Heineken Experience in Amsterdam having some fun with the photo cut-out boards.

My last day with Topdeck was a whirlwind start to the next 48 hours of travel. We started really early in the morning from Amsterdam and took a short lunch in Bruges, Belgium. I ate traditional Flemish stew with some fries and even squeezed in running into a shop for a waffle. A few hours later we were in Calais, France boarding a ferry across the English Channel on our way to London where I spent the night. The following day I went under the English Channel in the Eurostar train on my way to Frankfurt, Germany for my flight out to the US. 6 countries in under 48 hours, phew!

Alright folks I’m going to hibernate for a week or so and come back to you with my final post – a reflection on my changes as a human being throughout study abroad and re-entry. Bonus: What I would exchange between US and Germany to make ultimate super cultures.

This entry was posted on Friday, January 9th, 2015 at 11:37 am and is filed under Diana in Germany, Fall 2014. You can follow any responses to this entry through the RSS 2.0 feed. You can leave a response, or trackback from your own site.