Two classes have passed since the last time I spoke in depth about the academic portion of my study abroad, so here’s what I have been up to in the classroom (and out!).

My professor for this course was named Klaus. He’s a really silly guy who has a huge passion for his subject matter. Throughout the course he would make anecdotal quips about how his young sons confronted ethical questions in their daily lives. He would also explain some concepts or hypothetical situations in highly candid and casual ways. I left our first day of class feeling so excited about the subject matter. Never having studied philosophy before it was exhilarating to learn different codes of ethics, the arguments against them, and the counterarguments against those denunciations. I’m known to be “debate prone” which I like to call “debate loving” and the debates were written down right in front of me. 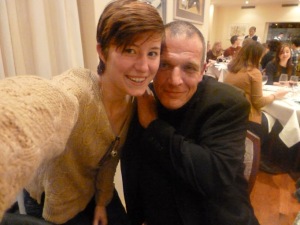 We covered three main topics in this class which were:

Klaus took our class out for beer after our final exam, which is not an uncommon practice here. When I turn 21 in the U.S. I would like to compare how students and teachers socialize differently, with part of that analysis focusing on the role of alcohol. So far in the U.S. I certainly have hung out with teachers outside of the classroom setting, but never in a bar.

The class I finished last Friday pertained to Sustainable Policy in the European Union (EU) and Germany specifically. Our first day of class I was struck by the energy and passion of our teacher, Sandra. It was also evident that the class would have interactive components in addition to lectures. Sandra wrote different topics on the board and asked us each to write our thoughts underneath. She also had us put different sources of energy production by the US in order and then showed us the real order. This method of teaching always services me more. I enjoy thinking first instead of being told first if possible.

Of course there were many topics Sandra had to simply teach us in lectures. Energy efficiency and renewables were two major themes of the course. For instance, two-thirds of the economic potential to improve energy efficiency remains untapped in the period up to 2035 in Germany. Then we learned in an increasingly specific fashion, scaling down from international policy, to EU policy, to Germany, to Freiburg and Freiamt.

The day we discussed international policy, we had a roundtable discussion on how to penalize countries who did not meet reduction goals. It is much more difficult to enforce emissions reductions on the international level, so the effectiveness of bodies like the International Policy United Nations Framework Convention on Climate Change (IPUCCC) is low. The Kyoto Protocol that resulted from their meetings was NOT ratified by the U.S. According to Bush, it would decrease our ability to build our economy, however we spent a lot of time in class discussing the numerous ways to be greener as a country. There is a lack of policy to encourage it and subsidies to non-renewable energies do not help because there is not an even playing field for renewable energy competition.

The next few days were spent on the EU Climate and Energy Package, which called for a  20% reduction in emissions, 20% increase in energy efficiency, and 20% increase in renewables energy consumption by 2020. The New EU Framework that was just ratified extends different goals out to 2030: a 40% reduction in emissions and 27% increase in energy efficiency and renewables consumption. Different member states (countries) within the EU get different targets of emissions reductions in order to meet the overall goal.

Germany plans to get at least 35 percent of its power from renewables by 2020, at least 50 percent by 2030, and at least 80 percent by 2050. This emphasis on renewable energy consumption is part of the German movement called Energiewende, which was in part fueled by the Fukishima nuclear plant disaster. Nuclear plant moratoriums began soon after the disaster. Nuclear power should be phased out entirely from Germany by 2022. Replacing this power with renewables instead of coal would help keep emissions down. One piece of policy that helps Germany become more green is the Renewable Energy Law, which includes feed-in tariffs for renewable energy. A feed-in tariff means that independent power producers have unlimited access to the energy grid and unlimited production of energy. If they feed their energy into the grid they are guaranteed to get paid for that energy at a set rate.

​Creating a model of a sustainable house in class

One afternoon class we were each tasked with exploring our village called Vauban. It runs on a cogeneration unit from natural gas and wood chips. This system enabled Freiburg to reduce its reliance on nuclear power from 60% to 30%. The famous Heliotrope, the house that rotates with the sun, is also located about 10 minutes walking from my house. The Heliotrope was the first home in the world that produced 5 times more energy than it expends: the energy consumption is emission-free, CO2-neutral and 100% renewable. The builder of the home, Rolf Disch lives there. Even closer (across the main road from my flat)  are the Solar Settlement, a low emissions planned community, and the Solar Ship. The Solar Ship is a business center with tons of solar panels on top.

​This model of an energy plus house is on my jogging route!​

​Skyview of the Solar Ship and Solar Settement. Look at all those solar panels!

One of our final days in class, we went on a field trip to a community called Freiamt. This community has 250 solar roofs, a biogas heat and energy generator we visited and also several wind turbines. At the biogas facility, 10 tons of corn go into the first tank. After the first step, everything foes into an anaerobic fermentor or 90 days. 1.3million kWh are produced at the facility we visited. Next we went to a farm with cows, solar panels, and a wind turbine. 65% of their income is from their cows, but 35% comes from selling their energy. They also produce schnapps from the energy they produced with renewables! During our tour of Freiamt we also stopped at several wind turbines, discussed how long the projects took, the sizes of the blades and height of the turbines, and also the financials of each project. We were even allowed into one of the turbines! To learn more about Freiamt, go to this link.

The major homework component of the Sustainable Policy class was coming up with a business plan related to sustainable energy. I will not disclose the specifics of my business plan since I may actually use it one day. We had to include unique selling points, risk assessment and mitigation strategies, financing, marketing, and stakeholders. The process the class went though though – practicing business pitches, presentations, and a final business proposal in writing – all really enhanced my skills and deepened my understanding of starting and running a business. This was a skill I never really expected to get over here, but it was awesome to have this practice. I’m not one to love group projects and this was all on my own. It made me feel that I actually accomplished something when I sent in the final business proposal.

I only have 1 class left, which requires 11 days in school. It’s my “Freiburg Green City” class that counts as an Environmental Economics credit. The class features 4 of field trips with one being a bike tour of Freiburg. After my first day of class today, it seems we will learn more about how the green image of Freiburg is merely a selling point rather than “reality.” A critical perspective Freiburg is certainly a new one, and I am excited to explore it further.

This entry was posted on Tuesday, December 2nd, 2014 at 4:19 pm and is filed under Diana in Germany, Fall 2014. You can follow any responses to this entry through the RSS 2.0 feed. You can leave a response, or trackback from your own site.