Jack in Czech Republic: I Go to School Too

I really don’t want to do schoolwork right now. So why not blog about school? Before I discuss the differences (or lack thereof) between Charles classes and Richmond classes, here’s a brief description of my five courses:

U.S. in the 1960s and 1970s – Refer to Ohio by CSNY from my mid-semester mixtape to get my passionate thoughts on this course. The discussions in this class are consistently thought provoking and sometimes ridiculous, in a good way.

Introduction to Photojournalism – You know your photojournalism course is impacting you when you stare at a wall in a bathroom wishing you had your camera on you. This course has already forced me to view photography, Prague’s landscape, and, I guess, bathrooms in completely different manners.

Global Communication – The one course I am taking with an American institution taught by an American professor from an American university. Yea, there’s not a whole lot of cultural realizations coming from this course. Overall, it’s been a fun class, though. I get to spend the next five weeks defending China’s censorship, so that’s kind of cultural, right? 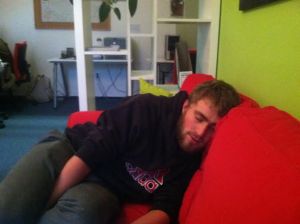 Here’s an action shot of Tim, who also gets to defend China’s censorship, working hard on our group project.

Czech for Beginners – Thanks to the Eastern Europeans, whose native tongue is somewhat similar to Czech, this is far and away my most difficult class.

Arms Control and Disarmament – This is a master’s level course on a subject I knew little about when I enrolled. So that should give you a sense on how difficult I find Czech language. Additionally, this is the one course that is vastly different than my Richmond courses. There are no assigned readings or written tests. Instead, students write weekly two-page research reports on one nuclear state (I’m the U.K.) that lead to our eventual end-of-class debate. My guess is that this class is different not because it’s in Prague, but because it is a master’s course.

With the exception of my Global Communication course, my courses are primarily composed of a mix of Czech students looking to improve their English and European students studying at Charles University for a semester. Despite the diverse composition of students, these courses don’t differ too greatly from my Richmond courses. There are, however, a few differences worth mentioning before I expand on how the two institutions’ similarities.

Punctuality, or lack thereof: At Charles, on time means 10 minutes late. And early means on time. It blows me away how many people show up to class late. My American history class, for example, always starts on time, yet it’s rare that at least two-thirds of the students are there when class begins. One reason for the constant tardiness could be that getting to class isn’t as simple as a five-minute walk from your on-campus dorm.

All around the city: Charles does not have a campus. Instead, the school consists of several buildings splattered throughout Prague. My five classes are taught in four buildings spread throughout the city. I still can’t decide which system I like better. I enjoy the different sceneries I’m forced to see, but the vast distances create more obstacles when going to class. Take, for example, when the city decided to change the tram lines without any heads up. Later that day I eventually realized my tram was not headed toward my usual Czech Language stop. I had to quickly get off and run through the city, so that I would not be too late. When I busted into class, out of breath and five minutes late, I noticed three or four other students in this small class had yet to arrive. Based on the students’ timetable, I was five minutes early.

Once-a-week classes: Except for my Czech language class, which meets twice a week, my courses meet once a week. I cannot overstate my love for once-a-week meetings. The workload isn’t too much different from Richmond’s, but having a full week in my grasp to spread out my work is fantastic.

Grading: I’m sure the grading at Charles is different from Richmond, since final grades are based on one or two assignments and class participation. I can’t tell you much more, however, because, well, I’ve barely received any grades. Typing that sentence gave me way too much anxiety.

Oral exams: Two of my courses culminate with oral exams, where I will have to speak with my professor about the course rather than filling in bubbles or answering short-answer questions. This feels like the biggest difference because I have no idea what to expect for an oral exam, and, well, it will be crucial to my grade.

So there are a few differences between the Richmond and Charles, but the most important aspect of a school – the way students learn – is quite similar. My educational experience – workload, types of assignments, discussion, professor availability, etc. – is quite similar to Richmond. Here’s the Spark Notes version of my classes’ syllabi: Do a reading assignment, maybe answer some discussion questions, discuss the reading in class, and ultimately take an exam/write a term paper/give a presentation. Strikingly similar to Richmond, I’d say. This certainly isn’t a bad thing – I love the whole reading/writing/discussing basis of my leadership studies and journalism majors. Additionally, I, like most UR students, I assume, didn’t go abroad for an out-of-this-world classroom experience. Sure, taking classes with a different faculty and different students offers a nice change of pace, but my true foreign education comes outside of the classroom. I came to Prague for a real-world academic experience – for example, meeting professional journalists and learning about the daily tasks of an online publication through my internships, traveling around Europe, and having to learn a city where English is not the first language. Hell, I’ve met a lot of fascinating people by having a couple drinks at Czech bars. I’ve been told for many years that learning doesn’t only take place in the classroom, but my time in Prague has given me a new perspective on that idea. 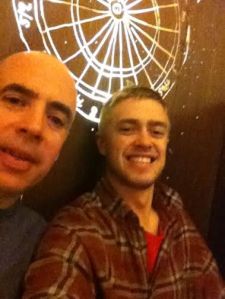 I was super happy to spend a day with this guy on his business trip. Thank you Teradata for sending my father to Prague!

This entry was posted on Thursday, November 6th, 2014 at 3:13 pm and is filed under Fall 2014, Jack in Czech Republic. You can follow any responses to this entry through the RSS 2.0 feed. You can leave a response, or trackback from your own site.