Diana in Copenhagen: Alone but not Lonely

I know this post is very delayed but I have a good reason, I promise! We had a fall break this past week and I had the opportunity to travel around Europe and visit Dublin, London, and Amsterdam. While they were all amazing and I loved each for different reasons, this post focuses on London where I had a very different trip from those I’ve grown used to. Hopefully I’ll get to write about the other cities in another post.

The walk from my hostel to this point was just about 5 minutes long. It was so easy to get to and such a cool place to explore.

If any of you remember my first entry, you’d know that I’ve been lucky enough to make many international friends in my years working at a YMCA summer camp. Many of those friends are strewn about England, so I saw it fit to visit London and meet up with as many as I could in the city. Unfortunately, I forgot to consider the whole concept of people having “lives,” and how they would restrict my friends from abandoning their universities and jobs to parade around London when it was convenient for me. This meant I was unable to connect with many good friends, but it did not mean that I wasn’t going to go to London. Rather than view it as a failure of a trip, I took it as an exciting opportunity to travel alone for the first time.

“Alone” might be too strong a word because I did end up meeting up with some amazing friends, but I stayed in a hostel by myself and was on my own to explore on most days. I did have a friend I could have stayed with in London, but she worked during the day and I chose to stay in a hostel to have more independence with timing and such.

My friend Laura and I met up for dinner and had drinks with this beautiful view of St. Paul’s Cathedral. There are many places like this one (Madison) that give you great views of the city without having to pay the London Eye or the Shard’s high prices.

I can’t say I wasn’t anxious about deciding to face the city on my own (I mean, I’ve seen Taken), but I was eager to use it as a chance to learn something about myself—to learn if I could do it, and to enjoy it too.

It was a great choice.

A few specific things stood out to me as being most notably different when traveling alone including planning, openness, and eating. I’ve outlined my feelings on each as honestly as I could, and I hope you enjoy my insights!

Planning
You can’t rely on anyone else to do the planning when you’re alone. This meant I spent an exorbitant amount of time arranging every aspect of my trip. Where was I to stay? What sights did I want to see? Was I going to stay in London for the whole trip? When and where could I meet up with people? There was no shortage of variables to manage but the organizer in me, which has been dormant as of late, got oddly excited planning out the four days. I even made an itinerary for my parents.

Where to stay was probably the most important decision I had to make since it was most vital to safety and convenience. After spending hours scouring websites, I decided to book three nights in a twelve person mixed room at the Horse & Stables Hostel. The location was nearly perfect as it was just a five-minute walk to the Thames and London Eye, and the hostel boasted great Trip Advisor reviews for solo travelers. I ended up really enjoying the hostel and would recommend it to anyone, solo or otherwise! There was a bar and restaurant right downstairs that gives discounts to hostel patrons, the workers were very friendly and helpful, the facilities were clean, and the location was amazing. 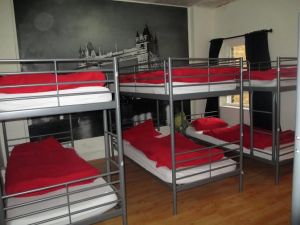 My bed was the one on the top right. It wasn’t too difficult sharing a room with other people, but the mornings were tough to get ready in the dark without disturbing anyone.

Planning activities was also important to me, because I wanted to make the most of my time in the city. London is quite expensive, which directed my research to deciding which attractions were worth visiting and which could be done in a walk-by. I saw all the major sights in city center: The Shard, The London Eye, Palace of Westminster, Buckingham Palace, Tower Bridge, St. Paul’s Cathedral, and Westminster Abbey to name the highlights, and only decided to go into The Tower of London after some friends’ recommendations. I saw everything I wanted and then some, and the foresight helped me to save money on the attractions that were less worthwhile.

As my last point on planning, I’d like to say how much I enjoyed signing up for guided tours. I did two group tours during my stay and liked the structure and personal aspect that came with both. It was good to join a group every once in a while to break up the alone time and provide a chance to hear interesting facts on some awesome places. I did a bicycle tour one day that took me around all of London’s major landmarks. My guide was both charismatic and informative, and I only shared the tour with one other girl! It was more like a friend was showing us around than a tour, and it was cool to see the city by bike. I did my second tour my last day and ventured out of the city to visit Oxford University and the Cotswolds. This was a day trip run by London Walks and it’s a great alternative to strictly staying within bounds of the city. Even though I was the only person buying a student discount when the rest of the group was buying senior ones, I loved what this trip had to offer. I would have gotten an incomplete perspective of the places we visited if I had gone alone, and it was worth the money to have an expert paint you a fuller picture. I wouldn’t have known the elaborate backstories or history of each location and the quirky facts each guide shared enhanced the trip exponentially.

This was one of the stops on my bike tour. This was at the Leake Street Tunnel where graffiti art is legal!

his picture is from my trip to the Cotswolds. This village only has a couple dozen people who live there during the week.

Openness
The main reason why I chose hostel-living over crashing on my friend’s couch (for free) was the possibility of meeting new people. I figured making friends for a short while was a superior alternative to being alone every second. I consider myself a friendly and outgoing person and feel comfortable befriending people pretty easily. When you’re traveling with a predetermined group though, as I have done on all my previous trips, you are less likely to seek any kind of deeper connection with the people you come across. You don’t need to. Alone though, you are much more willing to befriend the guy at your hostel you met by the toaster at breakfast, just as I did on this trip. Actually, the night before he was lucky enough to witness me spastically try and plug in the hostel door’s code to use the bathroom. Our second encounter was by the toaster at breakfast.

After a few second exchange, we discovered we were both flying solo and spend a few minutes eating breakfast together. After a bit we decided to tag-team our explorations instead of each going alone and spent the entire day sightseeing to the point where I could hardly walk. We shared a nice fish n chips lunch and sat in the hostel bar having tea to warm up when we got back that evening. Many people I know wouldn’t be open to meeting someone on a whim like this but the friendship felt quite natural to me. I can’t speak for him, but I believe the day was far more enjoyable spent with a buddy than traipsing about the city alone.

The issue of trust and safety should not be ignored, but neither should the value of being open to new people. Being cautious and aware is an absolute necessity, but you can do so without sacrificing opportunities to meet some really interesting people.

Eating
I am an extrovert who thoroughly enjoys being alone. I cherish time by myself in my thoughts and often find it calming. One time where I am less secure in that solitude however, is when I’m eating. For whatever reason I have a personal stigma against eating alone, and these were the times I found most difficult during my trip. As I mentioned earlier, I took a day trip to Oxford and the Cotswolds and really loved the outing. One portion of the excursion was difficult though, and that was when we stopped for an hour in a village of the Cotswolds for lunch. I brought a notebook with me to take notes along the trip, and I think my notes from lunch will give a more honest representation of my feelings than anything I’d try and express after the fact. I wrote:

“Went to a second village for lunch, we had about an hour. This was one place where it was very apparent that I was on my own. I like being on my own, I really do. I didn’t feel awkward of self-conscious at a lunch table for myself at all really, I was more just lacking on what to do.

I didn’t want to be a person staring at my phone by any means, not that I had any service or data to do anything. People watching and taking in my surroundings was an obvious choice of activity but that can only continue for so long before those around you think they’re being observed like zoo animals.

This time was when I was very appreciative of the little notebook I brought with me to take down notes. I feel more connected with my surroundings than I would have staring at a screen and get to document this moment that is an important one, in my opinion, to paint a full picture of my first real experience traveling alone.”

I was at such a loss of what to do I even put my terrible artistic skills to work and sketched my chai latte. It tasted supremely better than it looks in my rendition, believe me.

I found my time traveling alone to be particularly enjoyable. I loved the independence to do things on my own time, thrived on making connections with other travelers, and appreciated what the experience helped me discover about myself as an individual. I just might have caught the travel-bug on this London excursion and I would absolutely do another solo-trip in the future. Maybe onto Morocco next? Only time will tell. 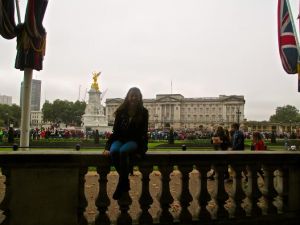 Traveling alone means you get a plethora of awkward solo pics…

…lots and lots of solo pics.

This entry was posted on Friday, October 24th, 2014 at 10:33 am and is filed under Diana in Denmark, Fall 2014. You can follow any responses to this entry through the RSS 2.0 feed. You can leave a response, or trackback from your own site.

One Response to Diana in Copenhagen: Alone but not Lonely