Diana in Germany Week Six: Ecology and Management of Forests

My second class of the semester is already over! Also about 35% done my stay in Germany to put things in perspective. So these past few weeks in Ecology and Management of Forests in Southwestern Germany and the Swiss Alps we have gone on field excursions a total of 6 times, and they were all amazing.

Our first excursion was an all day hike at the nearby Shauinsland hill. We took a bus up the mountain to save time, and we made it to the summit by foot shortly afterwards. There is a tower on top, but we decided not to climb as it would not have offered more of a view that foggy morning. Here we discussed how the Black Forest, Rhine River Valley, and Vosges Mountains were formed by the shifting of tectonic plates millions of years ago.

As we walked down through the hill paths we stopped to talk about the economy, the shift from grazing meadow to coniferous forests for timber, and the forest diebacks Germany experienced in the late 1900’s. We saw beech trees that are naturally predominant in this area and also many Douglas firs that have been introduced for timber and tree coverage.

Unfortunately I did not bring my camera on this trip, so no photos. Sorry!!

Our next field trip brought us to the border of France and Germany, which is delineated by the Rhine River itself. It was intriguing to see that the land and vegetation were different on opposite sides of the river! 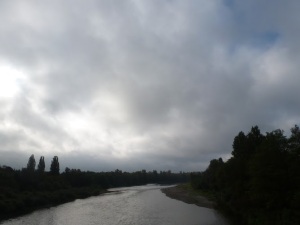 ​The Rhine River. France on the left and Germany on the right. In class a point was made how the banks look different and have different vegetation.

We studied the signs of flooding that frequently occurs in riparian areas. For instance, there were trees that were slanted and buildup of vegetative litter that had been carried by floodwaters. Closest to the rivers there were only new grasses and sometimes no vegetation at all since species had not been able to establish since the last flood. Trees were further up the banks. The rocks also gave it away. Smaller, finer sediment deposits higher up on the banks because it travels in the water whereas the largest rocks stay put near the river. 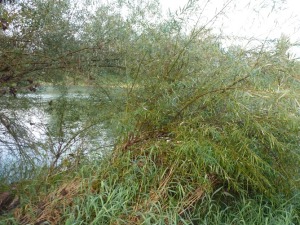 ​Flood waters made these trees bend and stay slanted.

Our next stop on the trip brought us to the side channel of the Rhine. Here we discussed the human impacts that literally shaped the river. Way back when there were many small side channels and more bends in the river. The riparian areas were relatively undisturbed and stretched a lot wider geographically than they do currently. All of this changed through a serious of straightening and damming projects. Now there are only two major channels with fewer curves. This was wonderful economically as it straightened and shortened the river, so shipping and boating took shorter periods of time. Unfortunately it exposed villages to flooding and destroyed huge areas of riparian habitat.

To reduce flooding and promote a more natural ecology, the Integrated Rhine Program was established. So far 3 out of 13 projects have been completed. It takes a long time to restore riparian ecosystems, but one step at a time things should improve.

Forestry relies on scientific research nowadays and Coventwald is one such research forest. Our guide for that day has been studying chemical deposition rates in the forest depending on tree type/amount of tree cover. The factors that increase chemical deposition in forests are the leaf area index and age of the trees. basically chemicals in the air (a lot now input by industries and humans) stick to leaves and then when it rains the chemicals wash off the leaves and deposit themselves into the soil. When soil chemistry changes, some trees are not as suited to the environment. 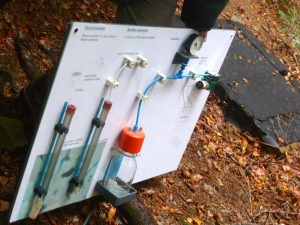 ​​​This is an example of the equipment used to get water out of soil.

The major results of the studies so far have been the following:

The coolest part of the trip was walking up a research tower. We had an amazing view from there, but it was scary! The stairs were wet, so walking up to and down from the top made me think I was on Fear Factor or The Amazing Race. At the top I also pondered the fact that my father would never be able to be there (he is pretty afraid of heights). 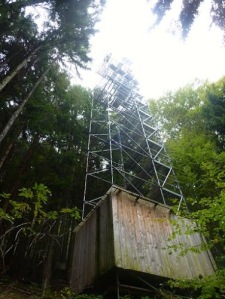 ​We got to go on top of the research tower at Coventwald! 11 flights of stairs was a work out. On top, we could feel the tower moving in the wind.

7am sharp this past Monday my class gathered outside of the Konzerthaus in Freiburg to start our 4 hour bus drive to Disentis, Switzerland. When we arrived in the Alps it was absolutely pouring (which is why I don’t have pictures from this first day of the trip FYI). To make a long day short, the class hiked hard terrain up into Scatlé forest that has been untouched by humans since before the 13th century, which makes it extremely unique. Very few tourists go through it and only a few researchers interact with the forest at all. We were out there for a long time with no facilities, so I unfortunately had to “interact” with the forest. You got it… I peed in a primeval forest. Soaking wet, we made it back to our hostel for showers and a great dinner with schnitzel, vegetable soup, and caramel flan. We were all very grateful to be warm and dry indoors.

Our second day welcomed us with beautiful weather. The excursion for that day consisted of taking a cable car up to the top of a mountain and walking back down it, similar to what we did during the Shauinsland excursion. Our speaker for the day had an extremely thick Swiss German accent and I could barely pay attention to anything said. That was fine because the surrounding area was gorgeous! 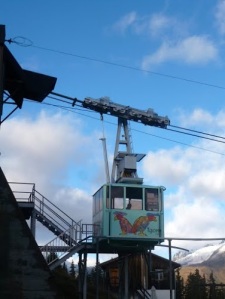 ​The cable car we took our second day in the Swiss Alps.

The final day of our trip started very early. We left our hostel at 7am and then had a few hours on the bus to sleep. We arrived at Aletsch mountain, which is the most beautiful natural place I have been so far during my study abroad experience. There were trees turning yellow and conifers that were green. The tops of the mountains are covered in snow. We even got to see Aletsch Glacier and, off in the distance, Matterhorn! We had to rush through our hike a bit because of the bus driver wanting to get back to Freiburg (about 6 hours away at this point). 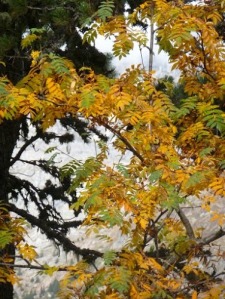 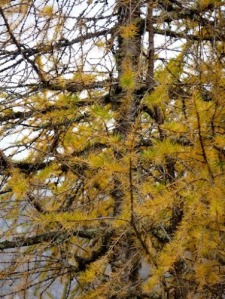 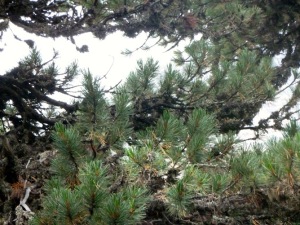 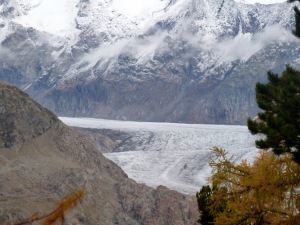 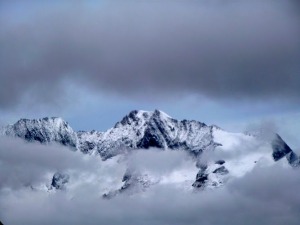 ​A stunning view from the top of the Alps.

On the way home our bus drove onto a train… it carries cars and busses. I had never even heard of this mode of transportation before! (Have you?) At 8pm, all us tired students made our way off the bus and back to bed.

The last day of class we started with a student presentation on the ways forests are managed all around Europe. However the most interesting part was that our teacher then spent the rest of the class period asking us for our critical input about the course. He took notes about our suggestions and what things we liked best. At University of Richmond we’re supposed to fill out forms online with our evaluation of a class, but this was such a more rewarding experience. Having a conversation as a class with a teacher and hearing what the teacher thought of our suggestions gave me a huge feeling of independence and control over my education.

Alright guys I have to admit it – homesickness has finally gotten to me a tiny bit. I want to devote a blog post to what things I do to handle those feelings and about how my relation to home has changed a lot since I came to Freiburg.

This entry was posted on Monday, October 20th, 2014 at 1:36 pm and is filed under Diana in Germany, Fall 2014. You can follow any responses to this entry through the RSS 2.0 feed. You can leave a response, or trackback from your own site.