Diana in Germany Week Three: Rumor Has It

Hi everyone! I feel my focus so far has mainly been on surface details – the nuts and bolts of my experience and of Freiburg, Germany. This week I want to delve a little deeper and analyze some observations I have made. **Disclaimer** The following are my interpretation of experiences and discussions with Germans and Americans that I know. This does not reflect every possible opinion, experience, or perspective.

Analysis of Observations
Almost instantaneously upon arrival, I noticed that Germans tend to be more reserved in public spaces as compared to Americans. In grocery store lines at home I’m used to striking up conversation with others – maybe about the weather, or how I like their outfit, anything to pass the time more pleasantly. So far people in stores and on trams in Germany do not joke or chit-chat with strangers. This difference is most notable between when I ride the tram with and without my IES group. Without the group, the trains are mostly silent. When a whole group of IES students get on the tram speaking in English, all eyes are on us because of how loud we are. I think both systems have their perks and that a respectful volume on public transportation has been enjoyable.

I understand such formality in Germany to be much more fundamental to the culture, especially as compared to the US. In German class our first day, we learned the difference between addressing someone formally and informally. In the US we also tend to address older strangers as Mr. and Mrs. (Herr and Frau auf Deutsch), while referring to younger strangers and familiar people by their first name. However, grammar and language changes due to formality in German. Verb conjugations in German rely on whether you want to be formal or informal, which to my knowledge does not exist in English.

The issue of formality may also seep into how quickly people become friends between the two countries. Before I came to Germany I read that personal relationships take more time to build here than in the US. One of the IES staff members put it differently: Americans tend to make “friendships” faster, but these are often superficial. Maybe what Americans recognize as friendship is acquaintanceship through another lens? Is this why we differentiate between our “best friends” and people who are only our “friends”? Either way, the people I spend time with here are very friendly and helpful and I strive to be friendly and helpful back — even if we aren’t technically friends. And that’s the way it should be!

P.S. People do not walk around in lederhosen and dirndls (traditional dresses) here. Unless you go to Munich right now or you are in a supremely traditional rural area. Sorry if this disappoints anyone.

Social Updates
There is so much to do during study abroad that it starts getting to be too much to remember to blog about it! Last week I left out an amazing exploration of Freiburg’s art galleries with Tobi, my flatmate and Simon, a houseguest from Toulousse. We visited an art gallery in addition to several smaller private collections with art for sale. The gallery is called Stadische Museen Freiburg im Briesgau, and it was full of contemporary/modern art. I found my new favorite piece of art (as shown below). Unfortunately I did not write down the name or artist, but that only means I will have to go back! We visited two smaller galleries as well, and I have never been to such a small gallery with prices listed next to the artwork. There were a multitude of mediums and techniques utilized in the artwork. Some of my favorites included paintings on aluminum using lacquer, 3-D boxed city collages, and amazing line portraits.

​My new favorite painting. Though the subject is quite gruesome (a huge massacre of animals?), the mark-making is powerful and expressive in a way that I admire 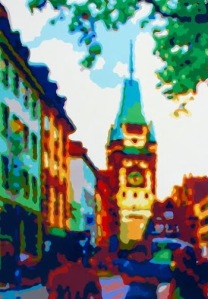 ​A painting of Martinstor using lacquer on aluminum. This medium blows my mind and I need to try it sometime! 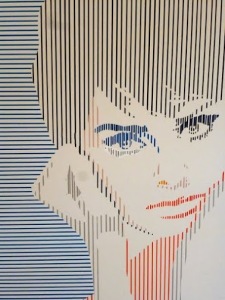 ​The simplicity of a few lines can still capture the complexity of a portrait. Amazing.

I also forgot to mention the Apple Pie Contest. Simon created several wonderful dishes and desserts while here. Somehow we ended up challenging each other to a duel where apparently I would have the home field advantage… because all Americans know how to make apple pie, right? Instead of going fully traditional, which would have taken way more baking experience and time, I decided to create an apple crumble Gordon Ramsey style. In addition to apples and caramel and cinnamon crumbles, this dessert has cranberries and lemon zest for extra pizzaz. The Gordon Ramsey apple crumble Youtube video and Simon’s help on making caramel sauce all contributed to me winning in taste. Simon won for presentation with a huge piece of caramel and obviously won for technique. Still – I won in a category against someone who has been cooking and baking his whole life!

​The apple crumble seriously crumbled on the plate – but it was still delicious!

​Me with my creation. Simon, my competitor, is still cooking in the background.

This week, I also participated in a few social events. My friend Sarah and I went swimming at an indoor public pool. To our dismay there was no hot tub and everyone was swimming laps. I guess the pool is as serious as the gym here in terms of a workout! The planned trip to Titisee on Saturday fell through because I had a cold and ended up sleeping in bed all day. My friend Anne finally got me out of bed with the promise of all you can eat sushi. We ended up each eating 15 pieces of sushi (3 rolls more or less), 2 miso soups, a side dish, and 3 scoops of ice cream. I am definitely going back on a weekday at lunch when the same deal is available for a full 10 euro less. The green tea ice cream was the highlight of my entire day.

Sunday I knew I needed to get out of the house, sick or not. With that goal in mind, I went on the 10km hike through Ravennaschlucht in the Black Forest as planned. Originally there was a group of 8 students, some from Ukraine and Japan in addition to Anne, another IES girl named Katherine, and I from the US. There were gorgeous waterfalls all along the trail and here or there I saw water wheels. The train stop was only one away from Titisee, so we originally planned on hiking then eating lunch in Titisee. Unfortunately, it started raining! This was not the best for my health, but it still was worth it. Katherine, Anne, and I celebrated successfully making it back to Freiburg with a nice, warm falafel pita. 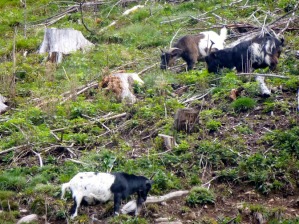 ​Goats greet us as we make our way to the start of the Ravennaschlucht trail.

​Me with our guide Mimi on a bridge in the Black Forest.

One of the many beautiful waterfalls along the Ravennaschlucht trail.

Next week
-Goals in Freiburg and beyond!
-Common topics of conversation during my trip so far
-The end of German class
-Brussels trip

This entry was posted on Monday, September 22nd, 2014 at 2:33 pm and is filed under Diana in Germany, Fall 2014. You can follow any responses to this entry through the RSS 2.0 feed. You can leave a response, or trackback from your own site.

3 Responses to Diana in Germany Week Three: Rumor Has It