So a couple weekends ago I went to Newcastle with a few friends.  I know what most people think when I say this,“Why Newcastle?”  After researching the city and wanting to see an English Premier League football match before the end of the semester, I decided on Newcastle.

Waking up a little after 3 a.m. on Friday morning was how the weekend began–my  flight was at 6 a.m.  I was shocked when I got to the bus stop and saw about 15 people at the stop at 4 a.m.  It was Easter weekend so I assumed that everyone was going home.  It was so crowded on the bus that it wasn’t able to pick up people at the later stops.  The airport was also crowded and I got to the gate right when my flight was boarding.  I landed a little after 7 a.m. and took a metro in the city center and got in no later than 8 a.m.  It was absolutely sublime walking around the city without anyone else around.  I wandered down to the Quayside (Riverside) as Newcastle is on the River Tyne. 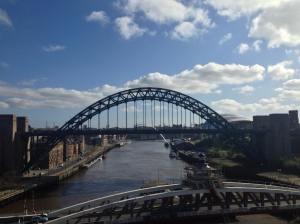 This area reminded me a little bit of Richmond and the area around the James River.  There were many unique bridges over the river which were quite amazing.  I saw a massive part of the city as I wandered around the historical parts, the Quayside, saw both universities (Northumbria University and Newcastle University), saw St. James’ Park (home of Newcastle United Football Club) and also a couple of parks. 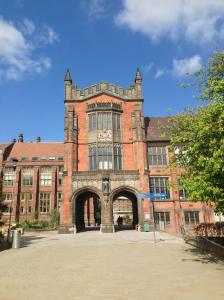 My friends from the University of Edinburgh arrived in the afternoon and we went sightseeing around the city, including the Quayside and Newcastle University.  We then checked into our hotel, literally right across from St. James’ Park.  Newcastle had two very large universities, so there was never a shortage of entertainment options during the night time.  Needless to say, we had a good time both nights we were there.  The first night, the place we went to even had a bouncy castle.

Saturday mainly revolved around the football (soccer) match at 3 p.m.  We walked around the city in the morning, got some lunch, and then proceeded to go the football match.  I was amazed by the stadium’s size right when we walked in.  It was a 50,000 seat stadium but right in the center of Newcastle. 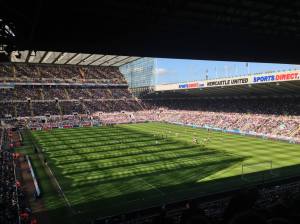 Newcastle United was playing Swansea (from Wales).  We had a great view of the game from one end of the pitch.  It was such a great experience and the crowd went crazy when Shola Amoebi for Newcastle scored first.  However, Wilfried Bony for Swansea City scored a header and then a penalty kick, thus declaring a win for Swansea.  After the match, we wandered around the stadium and it was just an amazing experience overall.  We then went to the park right behind the stadium and it was quite unique being able to see the stadium while in the park behind it.

The next day we decided to go out to the coast of England on the east side since Newcastle was very close.  We walked around the village of Tynemouth and had an excellent lunch consisting of turkey, beef, and ham.  We explored the castle there and even two of my friends went into the absolutely freezing water fully submerged.  I just felt it with my feet and it was so cold.  We then made the trek back to Newcastle where there was a bus back to Edinburgh in the afternoon.  My flight wasn’t until later that night, so I decided to take a train ride out to Sunderland, a city close to Newcastle.  It was really quiet around, probably because it was Easter.  I walked around a park there and saw a little bit of the city.

This was one of my most memorable weekends because it was off the beaten path.  It was fun making friends with the Geordies (nickname for a person from this region) and they definitely did have a unique accent.  All in all, a fun weekend and I would definitely return back to the city.

This entry was posted on Sunday, May 4th, 2014 at 12:26 pm and is filed under Austen in Ireland, Spring 2014. You can follow any responses to this entry through the RSS 2.0 feed. You can leave a response, or trackback from your own site.