Kimberlee in Mongolia: A Sunny Saturday

After almost a week separated from my host family, it was so nice to finally have the chance to spend time with them again. Who knew that after two weeks I’d be so attached to them? What an incredible feeling to have already formed strong bonds.

I began my day with a short trip to a conservation center/museum with Tuugi’s 7th grade class. We basically watched a 45-minute video on the deterioration of Mongolia’s environment and later wandered around many stuffed Mongolian animals. Although the tour was in Mongolian, most of the signs were also in English. That made it a lot easier for me to be engaged with the museum’s artifacts, and it was interesting to learn about the endangered species unique to Mongolia. The center was entirely funded by the Japanese government, so everything inside was covered in “From the People of Japan” stickers. Fun Fact: Japan is Mongolia’s biggest foreign aid provider

After lunch, my host family decided to visit some family members in the countryside. We drove about an hour outside of the city to a little village wedged between the mountains. It was absolutely stunning. We pulled up beside a giant herd of sheep and goats, and the kids immediately sprinted out to start chasing them. 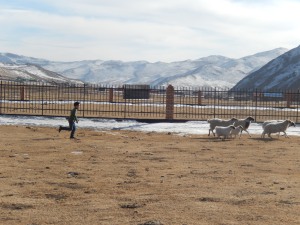 Temuujin chasing after the sheep

After the kids (both the human and the goat ones) became too exhausted to play anymore, we were invited into the ger for some tea and cookies. It was incredible to finally be inside of a ger. It was a lot larger, brighter, and sturdier than I imagined. There were lots of tapestries of horses and rams, and there was even a TV run by solar panels. All I could think about was what it must be like to wake up every morning in a ger to an amazing view outside your door. I guess I’ll be finding out what it’s like soon. 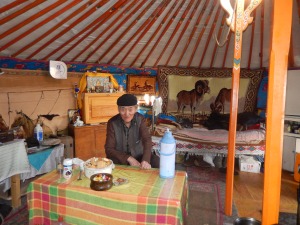 The view from inside the ger.

It was also there that I finally figured out that we were visiting Grandma’s late husband’s sister. Because we had stopped by without calling (which seems to be a typical practice), we had just missed her driving into the city. Instead, we were hosted and shown around by her husband. I was able to introduce myself in Mongolian, but I missed hearing his name in his response. He was very hospitable, and gave us a mini-tour of their barn and animals.

Most of the animals were scared of humans, but there was this one goat in particular that kept following us around. He would always be nudging my arm while I was trying to pet another animal or take a picture. He was the only “billy” (male goat) of the herd, and was the father of all the baby goats running around, so I called him “Papa Goat”.

We started to drive home just as the sun was setting, and it was a beautiful backdrop to what was truly a wonderful day. Tuugi, Temuujin, and Tulga all passed out on top of me in the backseat of the car, and it was nice to have some quiet time for reflection after a busy day. Looking back, we technically hadn’t done a lot, but it was a fun and fulfilling day. I count myself very lucky to have a host family that is always looking out for me and introducing me to new things. Simply put, it was the kind of day where I knew that I had made the right choice in choosing Mongolia.

This entry was posted on Monday, March 31st, 2014 at 10:20 am and is filed under Kimberlee in Mongolia, Spring 2014. You can follow any responses to this entry through the RSS 2.0 feed. You can leave a response, or trackback from your own site.