So I’ve finally landed in Mongolia, and am settling down in a hotel in Ulaanbaatar. My first impression of the city is that it’s very…gray. From what I’ve seen, there doesn’t seem to be large buildings in the city. But there are definitely a lot of Soviet-style apartments, not unlike the ones I saw in East Germany.

View of Mongolia from the airplane 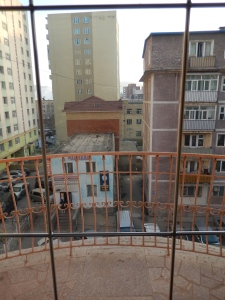 View from our hotel!

The welcome dinner on our first night

I’ve actually been a bit surprised by the weather. It’s been overcast and cold, but not to the extent that we’d been warned. It was around 15 degrees Fahrenheit for most of the day today. Our program director told us that this season is projected to be warmer than usual, which I’m pretty thankful for. I’m hoping that I can enjoy my commutes around the city, instead of rushing to my destinations because of the cold.

For our first day, we were taken to SIT headquarters to begin our orientation. It took about 30 minutes to walk there, and it was great to see the city for the first time. I didn’t take any pictures on the way over, just because I wasn’t sure what the picture-taking policy was in Mongolia. However, we’ll be exploring the city more tomorrow, so I’ll try to take a lot then. 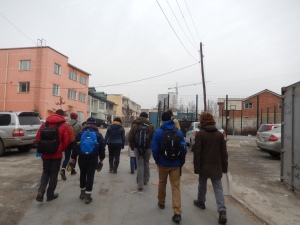 On our way to SIT orientation

During our orientation, we learned about safety, basic Mongolian, and even had an American talk to us about cultural differences. These are all topics that we’ll be discussing in greater detail, but it was nice to have some brief introductions. As our program director Ulzii Bagsch said today: “the whole semester will be your orientation”. This could not be more accurate.

Here are some things I learned about Mongolians today:

–       Giving/receiving things with your left hand is considered very impolite.

–       Mongolians are extremely superstitious, and also consult shamans before making important decisions. For example, they decide when to begin long journeys or have surgeries after consulting with their shamans. This is apparently so important that Mongolian shamans now give chants and advice via phone and Skype to Mongolians overseas.

–       Going off of the point above, Mongolians believe that Tuesdays are unlucky, so nothing big happens on this day (including haircuts).

–       Although hard liquor like vodka has only been in society for the past century, alcoholism is a big issue in society. The program leaders told us that in the cold months, the city has to pick up dead bodies of people who passed out in the streets and froze to death.

–       Mongolians apparently don’t help strangers because they believe that it’s none of their business. If you’re being harassed/abused/hurt in the streets, the likelihood that people will be indifferent to your situation is high.

–       Touching the heads of older people is considered extremely scandalous. Anything associated with heads is seen as almost sacred. For example, you can’t wear another person’s hat, because it touched their heads. Additionally, putting things like hats or even books (because they give knowledge to your head) on the floor is considered impolite.

–       Mongolia men hate it when Mongolian women date foreigners. The American told us that he has foreign friends who are married to Mongolians, but they have to pretend like they aren’t affiliated in public. This obviously means no PDA, but then also having to walk a few steps behind their wives in public. If they don’t do this: “the women will have their heads shaven, and the men will be beaten up by Mongolian men”.

Besides learning these small facts about Mongolian culture, we also had a session on Mongolian. All I can say is that it’s going to be much more challenging than Uganda. I’m finding it extremely difficult to keep up with learning meanings and pronunciations when I can barely read the words! Our teachers told us that Mongolian is related to Turkish, but to me it kind of sounds like a very rugged version of Korean.

The SIT building itself is very cozy and warm. It’s more of a house, with two floors, a kitchen, dining room, and small classrooms. It feels very welcoming, and the SIT staff is super friendly. There are 7 of them and 9 of us, so we’re basically equal in number!

Another cool thing about SIT Mongolia is that they have 2 cooks that prepare lunch for us! SIT Uganda definitely didn’t have that. So instead of always venturing outside for lunch, we have home-cooked meals that we eat together. 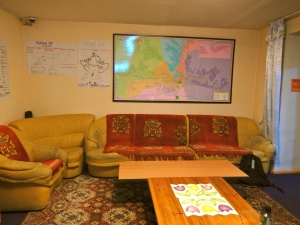 The SIT office is very cozy!

This is the living room- we ate lunch on the floor around the low table. The map on the wall is of Ulaanbaatar. Ulzii Bagsch explained to us that the shaded areas of each district indicate the communities in the city!

Overall, it’s been a great first day. I can hardly believe that I’m here, and am trying to take in as much as I can. I’m trying to focus on not comparing everything to Uganda, but I’ll admit that it’s been difficult. I realize that it’s human nature to compare what you see to what you already know, but I can already tell that Mongolia is a whole different animal from Uganda. I’m excited to see what’s in store for me this semester!

This entry was posted on Thursday, March 6th, 2014 at 1:53 pm and is filed under Kimberlee in Mongolia, Spring 2014. You can follow any responses to this entry through the RSS 2.0 feed. You can leave a response, or trackback from your own site.