As I wrote in my last post, I have been traveling around South India for the past two weeks on a lightening-speed tour of Kerala and Karnataka. Kerala, one of the southern-most states in India, is often considered a country apart from the rest of India, and better yet, “God’s Own Country.” In Kerala, my friend and I visited Kochi, the seaside state capital; Munnar, a chilly hill station among the Western Ghats; and Alleppey, the go-to town for boat rides on the backwaters. After two overnight bus rides north to Karnataka, we visited Udupi, home to many Hindu temples and the birth place of the dosa; Hampi, a tourist haven surrounded by beautiful landscapes and ancient ruins; Bangalore, the bustling business hub of the south; and Mysore, a smaller city known for its palace and yoga ashrams. The whole experience has been a whirlwind of historical sites, markets, beaches, and mountains, and I am already having trouble keeping everything straight in my memory. However, there are a few exceptional experiences that I am confident will stand out in my mind for years to come, and those are the ones I would like to share here. 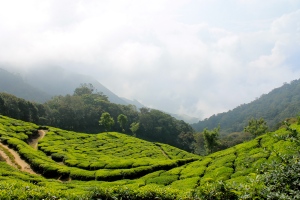 The tea plantations in Munnar

One of our first stops in Kerala was Munnar, a bumpy, nauseous five-hour bus ride from Kochi, tucked within the Western Ghats. As we approached Munnar on the summit of a hill, the air quickly got cooler, the scenery got greener, and I was immediately happier. Tata, a multibillion-dollar Indian corporation, owns most of the land surrounding Munnar and has turned it into profit by covering the land with tea plantations. From the road, the tea fields look like a rolling, rippling, sea of perfectly manicured green hills, occasionally peaked by a rocky summit. We spent two days touring the beautiful tea plantations and other areas around Munnar, including waterfalls and a wildlife sanctuary where we saw the rare grizzled giant squirrel, but sadly missed out on the rumored mountain goats and wild elephants. The whole time we were in the mountains, I was in awe at how many different foods are grown there – tea, coffee, bananas, sugar cane, black pepper, papaya, coconuts, and many more. 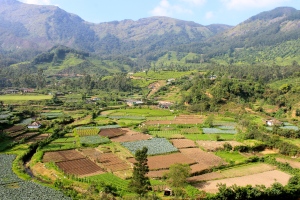 A village near Munnar

We left Munnar in the hopes of catching a once-daily direct bus to Alleppey, but when we got to the bus station, we were informed that the bus had been cancelled that day. Instead, we took three separate buses, zigzagging our way in the general direction of our destination, finally giving up in a small town and sharing a taxi with a nice Canadian couple for the last hour. When we finally got to our hotel late in the evening, the hotel owner told us that the cheaper room that we had reserved was actually taken, but graciously gave us a more expensive room for the same price. Little did we know at the time that it was an off-site cabin in the middle of a rice field that took 30 minutes in an auto and a boat ride to get to! Despite our confusion getting to our “room” after a long day of bus riding, staying in the cabin was an awesome experience. We were right on the edge of a backwater canal in a long row of village houses, right across the water from a man named Babu who had a canoe and would take us on canoe rides for 200 rupees an hour. We spent a lazy morning canoeing through the village with Babu, who knew everyone and had to stop every 15 minutes to talk to his friends along the water. That afternoon, we rented kayaks and toured some of the most beautiful areas of the Alleppey backwaters. 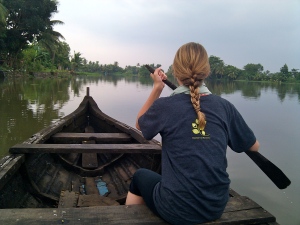 Canoeing in the backwaters near Alleppey 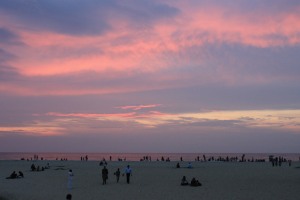 Sunset over the Arabian Sea at Alleppey Beach

Traveling through South India these past two weeks has been one of the most exciting and interesting times of my life, and I am amazed at how much I have learned in such a short time. As my return home quickly approaches, I hope that I will be able to make the most of my experiences here – especially what I have learned about how different cultures can be, but at the same time how similar we are as people. It continually surprises me that, although the details of daily life may be different from country to country or even region to region in India, we have much more in common than what may be seen on the surface. Now that these two weeks are over, I can’t wait to see my friends and family once more in Hyderabad, then head back to Raleigh, North Carolina!

This entry was posted on Thursday, December 12th, 2013 at 2:53 pm and is filed under Fall 2013, Rhiannon in India. You can follow any responses to this entry through the RSS 2.0 feed. You can leave a response, or trackback from your own site.

2 Responses to Rhiannon in India: A South Indian Adventure