If there’s anything that deserves the dedication of an entire blog post, it’s food. So far, I have loved the food here, and making the adjustment at the beginning of my trip was surprisingly easy. Some of the “dangers” that people warned me about still ring true, like drinking tap water or eating too much street food, but my friends and I have been here long enough now that we have adjusted to a lot of the differences. Sometimes I even go to a roadside stand with my host sister, Prerna, to eat a delicious snack called pani puri. When you go to a pani puri stand, the vendor takes a hollow fried ball out of a bag, pokes a hole in it with his thumb, throws in some mashed chickpeas with spices and cilantro, dunks the whole ball in a large vat of spicy broth, and hands it to you. You have to throw the whole thing in your mouth immediately before it disintegrates – and before he throws the next one your way.

As a disclaimer, my experience with food in India could never do justice to Indian food in general. Every state in India has its own trademark dish, and many people say that there is a new signature cuisine every 50 kilometers. This is because regional produce and ingredients almost always dictate the traditional dishes of an area in India because it wasn’t too long ago when India was made up of smaller localities called princely states. For instance, dishes in Kerala (the southern-most state, at the tip of India) always include coconuts – coconut oil, coconut water, coconut milk, or dry coconut mixed into curries, chutneys, and sweets. Hyderabad is known for its spicy rice dish called biryani, and everyone here is proud of it. Biryani is typically eaten for special occasions, is made in very large quantities, and can be made “veg” or “non-veg” with mutton or chicken. Biryani is made with a variety of spices, or masala, including cinnamon, cardamom, and cloves. 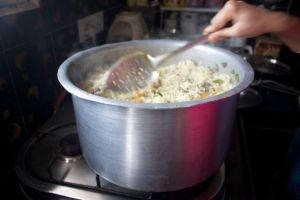 There are also many religious beliefs that dictate the way people eat in India. The ancient Hindu religious texts say that eating a strict vegetarian diet makes you peaceful, so being “veg” is a religious tradition and is also a symbol of caste identification. However, many people eat “non-veg” too, especially the Muslim and Christian communities, so finding a non-veg meal isn’t difficult. The ayurvedic texts also describe the health benefits of eating with your hands, like that your fingers correspond to the five elements, so using them to eat helps with digestion.

My host family is vegetarian, but Jennie, my friend who is also living at my home stay, is vegan and gluten-free, so now all of us eat that way at home. Unless I am traveling or my friends and I go out to eat, I mostly eat home-cooked meals by our host mom, Nivedita. In the morning, Nivedita makes us breakfast to take to school, usually consisting of fried rice and vegetables or dosas with chutney. Dosas are like super thin pancakes made of rice flour, similar to crepes in French cuisine. Chutneys can be made of virtually any vegetable, peanuts, or even coconut and are pureed with oil and spices. For dinner, we always eat together on the floor in the living room and usually have rice with daal (lentil soup) or a vegetable curry using okra, potatoes, onions, tomatoes, or carrots. 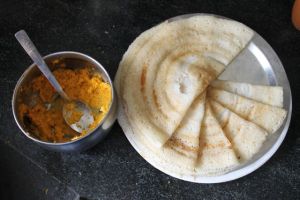 For lunch, I usually eat at one of the student canteens on campus. These canteens are all over campus and range in size from full restaurants to little shacks behind the school buildings. At the campus restaurant, called Gops, you can order tons of different curries, rice, noodles, and breads like naan or roti. The smaller canteens serve chai (tea) and fried snacks like samosas throughout the day and serve meals only around lunchtime. When you order a “meal,” you get a huge pile of rice and unlimited amounts of the curries and chutneys that they have made that day. 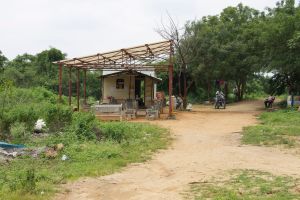 My favorite canteen on campus

Another important meal of the day in India is “tiffins,” which is like the Indian version of teatime. This includes chai of course, but also a variety of snacks that are all deep-fried and incredibly delicious. I have been to two cooking classes to learn how to make some of these snacks, and the cooking instructors tried to teach us healthier ways of making them, but that didn’t mean they spared the oil and salt. We learned how to make mirchi bujji, pakora, chickpea sundel, and chiwada. I won’t explain these in detail, but they are all fried in oil and a variety of Indian spices. These are also typical dishes to eat during the rainy season. As my cooking instructor put it, “When Indians smell rain, they also smell pakora.” 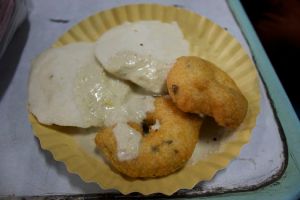 A tiffins meal on the train – idly, vada, and chutney

As you can see, there are so many different types of Indian food that it would be impossible to describe them all here. I always enjoyed Indian food before coming here, but I have realized that what I thought of as Indian food at home barely scratched the surface. One of the best parts about traveling to new places in India is experiencing just how different the cuisine is from region to region. It really shows what a diverse and interesting country India is!

Preparing pakora at the cooking class

This entry was posted on Wednesday, October 2nd, 2013 at 2:29 pm and is filed under Fall 2013, Rhiannon in India. You can follow any responses to this entry through the RSS 2.0 feed. You can leave a response, or trackback from your own site.