As cliché as it sounds, I find it hard to believe that it has already been four weeks since I first arrived. The weeks seemed to have flown by and it only reminds me that my stay here is limited. Not one day should be wasted.

It was only nine days ago since I hiked so high up Mount Cargill that I was literally above the clouds. After the one hour ascent to the top of the 676 meter mountain, I was rewarded with a beautiful view of the entire city. The summit allowed me to see all that has been surrounding me for the past month. Everything was in plain sight. The peninsula, the flats, the town. Nothing could be hidden, no matter how hard it tried. I was seeing Dunedin in a completely new light.

Above the clouds at Mount Cargill

I had also decided to take a slight half an hour detour in order to make my way to the well-known organ pipe rocks, which required me to channel my arm strength in order to reach the top. The unique framework of this area made the climb enjoyable and unpredictable. The rocks being so steep and uneven made the task difficult; but it was a challenge I was more than willing to take on. 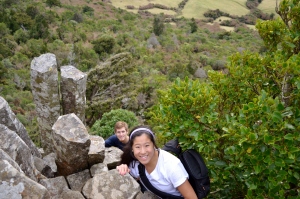 It was only seven days ago when I realized that the work in my courses is going to start picking up soon. In my zoology paper (they call courses “papers” here at Otago), I have two lab reports due, one of which is based on observations that I made at the Otago Museum. I find it very fortunate that the zoology lab (also known as a practical) took the students to the museum, for it allowed me to learn specifically even more about New Zealand biology and environment. I never would have thought to take the time out of my day to visit the museum, but this particular lab gave me the chance to discover more about not only the city of Dunedin, but the entire country as well. Likewise, my first Microbiology test is approaching next week. It will be my first test out of two for the semester. Hopefully my current studying skills are enough preparation because I don’t know what to expect out of the exam.

It was only four days ago when I left Dunedin for the first time since I had initially arrived. I ventured out by leaving the town that I was finally comfortable in and made my way to Wanaka, a town with a native sense of splendor and endless surrounding nature. The whole purpose of the trip was to ski at Treble Cone, the largest ski resort of the south island of New Zealand. I knew that the skiing experience was going to be somewhat exotic once I realized that we had to drive practically two-thirds up the mountain to get to the actual snow to ski on instead of parking at the base, like in America.

As strange as it was skiing in the middle of July, it became easier to get used to. The mountain was completely open, for not one forest or tree-line was present to be used as guidelines for the trail. Every track that I skied was completely one of my own.

Even though the chairlift did not take skiers up to the summit of the mountain, we had the option to climb to the top with our skis in order to access untouched, fresh powder. The fifteen minute trek to the peak of Treble Cone was well worth the extra effort. Everything at the top was completely natural. The cold, brisk air and vast mountain landscape of the backcountry reminded me that winter indeed has its own kind of magnificence. It will never cease to amaze me that nature can evolve unconventionally in such a complex and dignified way.

It was only two days ago when I returned back to my flat in Dunedin. As nice as it is to be back at home, I have only become more motivated to see more. My first trip being a success has set expectations for me for the rest of the semester.

It was only today when I realized that I have officially been here for exactly one month. A little less than four months left in my study abroad experience. Even though the weeks have been flying by, I am definitely satisfied by the amount of excursions that I have taken initiative to do thus far. I won’t allow myself to take my time here for granted, for I plan to make the most out of this experience as best as I can. The days left in New Zealand may be limited, but my drive to explore certainly isn’t.

This entry was posted on Tuesday, July 30th, 2013 at 3:26 pm and is filed under Alyssa in New Zealand, Fall 2013. You can follow any responses to this entry through the RSS 2.0 feed. You can leave a response, or trackback from your own site.