In some of my previous posts I have already written about the unbelievable school spirit that is so well present on the Yonsei campus, but over the past week I actually experienced it first-hand. There are two big events at Yonsei every year that attract many students and that are given a lot of attention: Sports games against Korea University in the Fall and Akaraka Festival in the Spring. I am very lucky to be in Seoul during the Spring since that gave a possibility to take part in the Akaraka Festival.

So what is this Akaraka thing? Just the best thing ever! No, seriously. I have never before experienced anything like it: It is a festival, a huge party, something like a carnival, big concert, and so much more. I think one could somewhat compare it to Pig Roast, but it is so much more. This year May 14-16 Yonsei turned blue. Literally. Everywhere you would look there were people in blue, which is Yonsei’s color. It was so hard to locate anyone as all the students were wearing blue shirts as a way of showing the school pride and belonging to the best University in Korea (yea, I might be a bit biased but I do think Yonsei is amazing). 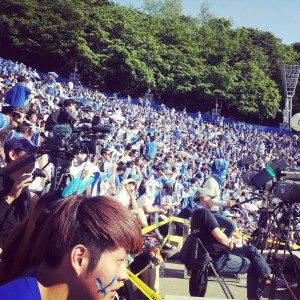 The first two days of the festival there were so many street vendors selling delicious Korean street food (such as Korean pancakes, fish cakes etc.), concerts all across the campus, games, and open air parties. There was even a huge trampoline-bungee jumping that many students took their turn on. The first night of the Festival Mentors Club (similar to the Ambassador Club at the UR) organized an amazing “Gentlementors” (reference to Psy’s “Gentleman” song) party in front of the main auditorium. There were so many students dancing and having fun. Definitely one of the best nights I had in Korea so far. Before the party we also had a Zombie Run. This was the event organized by the student council and both Korean and foreign students participated. The basic ideas was to walk/run down the path while escaping zombies. There were five zones along the path each with their own topics and rules. Thriller zone, for instance, was probably one of the most interesting. Runners were only able to move when the Korean song “Thriller” was played, if they moved when song is not played zombies would take their life (each participant had 3 lives). Zombies were amazing! Yonsei hired professional make up artist who made a lot of people including some of my friends look like real zombies. A huge number of students participated in this event and the reward for the last man standing was 300.000 won (about 300 dollars). The Zombie Run was truly very fun and I enjoyed it a lot! 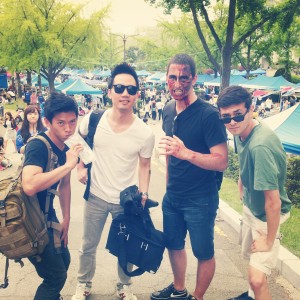 Preparing for the Zombie Run

Second day of the festival was all about the concerts and food! I really enjoyed walking down the main road and trying different Korean street foods (it is very delicious and extremely inexpensive, definitely a must try while in Korea!). It was fun seeing the Korean bands and performers in concert too: So many Korean students were super excited while I knew none of the performers and understood none of the lyrics. It was very entertaining nonetheless.

After a two day warm up, Thursday finally came. Most of the students had their classes cancelled (all 3 of my Thursday classes were cancelled!) and starting from about 2pm celebrations started. Many students went to the outdoor amphitheater around 1pm already in order to see K-Pop starts who performed before the real Akaraka started. We were advised by the Korean students to come to the amphitheater some time between and 5pm. Akaraka was mind-blowing! So much energy, dancing, cheering, many performances and artists! I’ve never seen anything like it. We were on our feet dancing from 4 until 10pm. And it was amazing! Many famous Korean bands performed such as Girls’ Generation. The entire amphitheater was going crazy. Everywhere you would look you would see a sea of blue. It really shows how important the school spirit is for the Yonsei students. Being part of Akaraka and one of the thousands of students who were present there made me feel like a part of the Yonsei community. I realized how much I love this place and how Seoul feels like a home. I don’t think I will ever be able to put into words what happened on Akaraka Thursday; it is simply something one has to experience in order to understand it. 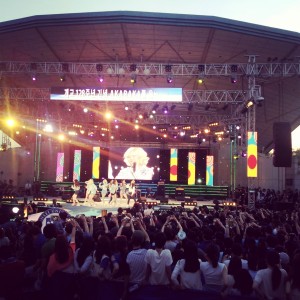 I have to admit that the three days of the Akaraka Festival were the highlight of my stay at Yonsei so far. I loved every bit of it and I sure would love to relive it. Yonsei is such a special place that grows on its student and becomes a true home. Too bad I will have to leave this places I learned to love so dearly in only 4 weeks… But I’ll think about leaving later. Now I have to enjoy the time I have left!

This entry was posted on Monday, May 27th, 2013 at 10:10 am and is filed under Indira in South Korea, Spring 2013. You can follow any responses to this entry through the RSS 2.0 feed. You can leave a response, or trackback from your own site.