Bernin it up! (posted by Pierre en Suisse)

Bonjour à toutes et tous! This is to say, hello to all ! This is typically how emails that I receive from the University begin. For those of you who are not familiar with the French language, toutes and tous both mean “all,” so essentially I just said hello to all! However, in French there are also the different genders. As such, it is necessary in various circumstances to use both the masculine and feminine forms when sending mass emails or writing to many people! It doesn’t happen all the time, but it does often with official emails. Hope you enjoyed your free French lesson of the day!

What a whirlwind the past two weeks have been. To sum it up really fast before reading on, I have experienced fondue and the festival known as Carnaval. Within the course of a quick four days, I feel as if I got a lot of Swiss culture really fast, but it was all amazing! I will start with the food.

Last week, I went out to fondue with my cours de vacances class, which you may remember reading about in my last entry. Fondue is a very traditional Swiss meal. It is not the typical chocolate fondue that we like to think of using fruit, although one can find it. Rather the Swiss eat bread, a mixture of cheese, and then finish the meal off with wine or tea. The cheeses most typically used are gruyere and emmenthal, melted together in a pot. At the restaurant, we were presented with a plate of bread, and it is your job to take a piece, break it up, put it onto the “fork” and cover it in cheese.

Cheese for the fondue!

The utensil used was something that I’m used to roasting marshmallows on. It is also critical to make sure you don’t delicately or lightly cover it just to taste the cheese. It was completely obvious to all Swiss people around me that it was my first time eating fondue. I was instructed by a friend who comes from the German part of Switzerland to completely sink the piece of bread into the cheese, then pull it out and let the excess cheese fall off. One also must pay close attention that the bread doesn’t fall off of the “fork” because then the person who lost it needs to either sing or do some other embarrassing task that the table decides. Luckily, this didn’t happen to me. When the cheese is all gone, there is usually some burned cheese left on the bottom of the fondue bowl. According to the fondue experts, this is the best part, and cannot be left! I tried it and must say I loved it. While this entire meal is going on, you need to drink either white wine or tea with the fondue. Otherwise, your stomach is going to be left to digest a block of cheese. While it was very filling and unlike anything else I’ve ever eaten, I did absolutely love it and I am excited for the next time I’ll get to try it!

The food experience certainly doesn’t stop there. This weekend I also got to go to a Swiss festival known as Carnaval! It is very similar to the idea of Mardi Gras, though it happens throughout the country on various dates, beginning anywhere from the weekend before Ash Wednesday to the end of May in some cases. On Saturday morning, a friend and I hopped on a train and headed into Bern for Carnaval in the Swiss capitol city. After a breathtaking train ride through the mountains, we arrived in the city, without a single idea of where to go! Our friend who had planned it wasn’t able to go at the last minute, so we had to improvise in order to figure out where to go. The one thing we did know about Carnaval is that people would be dressed in very colorful costumes. Luckily, we saw some people dressed up for the party and followed them from the train station into the city, until we found where we were supposed to be. Along the way, we saw some of the famous sites such as the Swiss Parliament building, and the most elaborate clock tower I have ever seen (so far). Included in this tour was trying probably way too much food that we found at various street vendors lining the main street of the festival. We ate things such as tarte flambée, crêpes, and of course, German sausage. With our stomachs filled, we lined the street with the rest of the carnaval-goers! In Bern, it is tradition to commence carnaval celebrations with a freeing of the bear that had been captured and held in prison for its winter sleep, and so the parade begins with the bear leading the way.

Parade starts when the bear comes marching through the street!

After the mascot passes through the street, there are marching bands dressed unlike anything you will ever see in your life, playing all kinds of music, and throwing candy to the crowds. There is also a lot of confetti throwing. If you ever go to a Carnaval in Switzerland, don’t be surprised when a kid maybe as young as six year old looks up at you, takes a handful of confetti from a bag, and throws it right up at you with a huge triumphant smile. People usually have confetti of their own to throw right back at whoever throws it at them, but my friend and I didn’t know about this before everything began, so we generally just laughed with surprise when we would get covered in all sorts of colors. I absolutely loved Bern! The city was truly quite beautiful and the festival was amazingly fun! 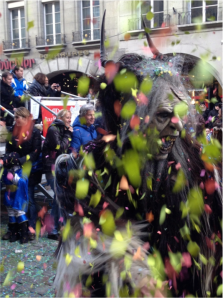 Probably my favorite site at Carnaval was this lady, who was dressed like a snail and walking at the same speed as a snail (despite kids throwing confetti at her the whole time)

This week has been the first week of classes. Stay tuned for my next post to hear about just how very different of an experience trying to get settled into classes here at a large university has been, and also to get a glimpse of some photos of the Alps, as this weekend I’m headed skiing! Thanks for reading, and à bien tôt!

This entry was posted on Friday, February 22nd, 2013 at 2:12 pm and is filed under Peter in Switzerland, Spring 2013. You can follow any responses to this entry through the RSS 2.0 feed. You can leave a response, or trackback from your own site.

One Response to Bernin it up! (posted by Pierre en Suisse)