Bonjour! As I write this, my first week in Lausanne, Switzerland, is coming to a close. It has been such an incredible week; trying to collect all of my thoughts in order to write this has been such a challenge! A French word that describes what I am currently experiencing is habitué (hah-bit-chu-ay; or go on google translate to hear it said if you like) which means, not surprisingly, to accustom, to get used to, or to habituate oneself. Fortunately, I can report that this process is going quite well!

No matter how well my adaptation here has been going, there is still a huge list of things that I could never have been prepared for. As silly as this sounds, I was not really prepared to start speaking French at first! I first realized this when I stepped onto the airplane and was greeted with “bonne soir monsieur!” rather than good evening, like I would have expected. When I stepped off the plane and was in the Geneva Airport, my first step was to go through customs; when the official was asking me to step forward in French, he had to repeat himself several times before it registered with me that I had to move. If I got into anyone’s way while walking through the airport, my gut reaction was to say “oh sorry!” after this happened several times though, I remembered that I should be speaking French instead, and say pardon! If you read my first post, Last night in the US, you may recall that I was very nervous to come here, since it is my first time traveling abroad. I was really afraid that I would have trouble getting from the airport itself to Lausanne. I did make it though, finally, and it was magnificent! I took a taxi from the train station to my hotel, and successfully had my first conversation in French with the taxi driver who did not speak any English.  I was so proud afterwards! After checking in at my hotel, I quickly set out to explore the city.

The buildings are a very interesting mixture between medieval architecture with some very modern twists here and there. However, amidst the cobblestone streets and pastel-colored buildings, there were so many people! Lausanne is a small city with about 300,000 people living there. However, walking through the streets, even on a Saturday and Sunday as I did the next day, it felt like I was in one of the busiest parts of New York City! Unfortunately on my first day, it was cloudy and I could not see the mountains. However, I reminded myself that there would be plenty of opportunities for this. 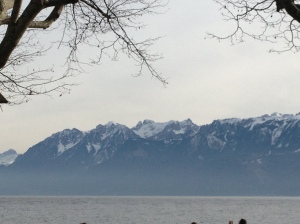 The next morning, when I left my hotel room to go downstairs for breakfast, I am not lying nor exaggerating when I say the smell of fresh croissants greeted me. It was too good to be true, I thought, until I headed down and saw the breakfast display. It was as if I had never seen food before; I had no idea at first what to do to put a meal together. There were familiar things like fruit, bread, coffee, and nutella, but then there were other things that I was not expecting: swiss yogurt, which I discovered to be a bit more liquidy than the greek yogurt I usually eat at D-Hall but yet still so very delicious, different types of jams that I had never seen before, and various types of cheese spreads. I had never seen cheese like this at breakfast, so it really took me by surprise. When I chose a table, I noticed there was an empty jar in the middle. I had no idea what its purpose was at first, until I saw people around me putting things like food wrappers into them. This was how to get rid of my food trash, and to leave a clean plate for the staff to take away!

The list of surprises does not stop here. In the US, I am so used to having shops and stores, especially for food, open fairly late. Here in Switzerland, it seems like almost every store is closed by 7 pm, and it seems like anywhere for food that is still open after that is too expensive. It can be very difficult to find something after a certain time, so I have learned that planning ahead is very necessary. Another of my favorite differences is the vending machines for coffee that one can find spread out around the university. Even if you don’t have a cup with you, the machine will produce a small plastic cup for you if you ask for it. The coffee that is consumed here can fit in these cups. It is much more similar to an espresso than it is a typical Starbucks coffee. This also means it is much stronger, and for a coffee addict like myself, this has been an interesting adjustment. It has also been an adjustment for me to get used to the metro system here. It is not that the system itself is confusing, but the trains and buses at first can be a source of confusion. The doors don’t typically open by themselves; you must press a button at the nearest door to open it, or else you won’t get on the train. Before I learned this, I did miss a train once. I expected the door to open, and stood there staring at it, and nothing was happening. Eventually it just left the station, with me standing there feeling embarrassed. Luckily this hasn’t happened since then because I did learn quite quickly how the system works.

A brand new concept for me: coffee vending machines

It is a huge understatement to say things are different here. Overall though, it is a great difference, and I know that in the coming months that I am here I will learn so much. I already notice my French improving a little bit, but it may also be that I am gaining more confidence in speaking with others. One of the main reasons that I chose to come to Lausanne rather than a large city like Paris was because I expected in a smaller city that there would be less people who would speak to me in English. This has held true, and there have been plenty of times where I would go to look for something like a cell phone and I would have no option but to speak French to understand my options. I think that this is going to be very beneficial in the end, even though at this point it can still be a bit difficult. But in any case, there are plenty more adventures and tales to come, but in the mean time, à bientôt!

This entry was posted on Friday, February 1st, 2013 at 3:13 pm and is filed under Peter in Switzerland, Spring 2013. You can follow any responses to this entry through the RSS 2.0 feed. You can leave a response, or trackback from your own site.