Sleepless in Uppsala: Exams, Projects, and Concerts with a “Little” Pinch of Snowstorm (posted by Indira in Sweden)

Too much to do and not enough time! That is basically my life right now. Can’t a day last longer than 24 hours? Or can we at least get an extra day in a week?

Finals – we all know the stress and the amount of work that comes with them. Even when abroad. Last week I had my final exam and a project for the two classes I was taking in November. For one of the classes 100% of the grade is based on the final exam. Actually, that is one of the things I am not that happy about. I like it much more when there are different assignments that each carry a certain percentage of the final grade. For my Sustainable Development class, for example, we had to write three individual papers and a group case study, and make a group presentation. In this way I feel like the grade is much more structured. Having only one exam, however, does have its benefits. Classes and seminars are much more relaxed and as a result students feel less pressure. On a happy note – now I am done. Yesterday I had my group presentation and my November courses are finished. It was actually sad thinking that I might never again see the people I worked so hard with on our group case study.

Speaking of exams: they can be a challenge…but think about going to the exam hall (which is located on the opposite side of the city compared to the area where I live) in a raging snowstorm. Yea, you read well – snowstorm. It was snowing the entire day, but it got really bad about the time I finished my exam. I tried walking over to the bus stop to go back to Flogsta and it was so hard walking because the snow was getting in my face – it was kind of snowing horizontally. First the busses were late and then they were not running at all after 5pm. I was lucky enough to catch the very last bus to Flogsta and get back to my room. The trip back, however, took more than an hour (usually it shouldn’t take more than 15-20 mins cycling): I had to wait so long for the bus and the ride took much longer since there was so much fresh snow on the roads. I have to admit though: This was a rather interesting experience. I figured out that if I survived very low temperatures and a snowstorm, and yet I still love every bit of Sweden… well, then it must be that special study abroad bond. 🙂

View from my window: Snowy Uppsala

After the snowstorm, the skies cleared, the roads were cleaned and I hopped on a new adventure – an all Swedish concert. In the Stockholms Nation there was a gasque and at the after-party Alina Devecerski (she is pretty popular Swedish singer, especially among the youth) was to hold a concert, so I went there with a couple of my friends. The place was full! I don’t think that Stocken (Stockholms Nation’s club) was ever that full. And the concert was amazing: I enjoyed it so much, especially the front row! The only bad thing was that she sings in Swedish and that makes it kind of hard to sing along. We were also in a very Swedish crowd; there were only five exchange/international students there, which makes this event “all Swedish” as my friends call it. 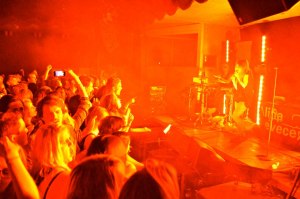 And then came Stockholm City as a great finish to a busy week, kind of a well deserved time off. I went to Stockholm with one of my friends simply because we felt like it (good thing Uppsala is only 40mins by train away from Stockholm and trains are running almost all the time so it’s easy to get to Stockholm and back anytime you want/need). We had a great afternoon of walking around the city, seeing the Christmas market, enjoying fika, and doing some shopping. 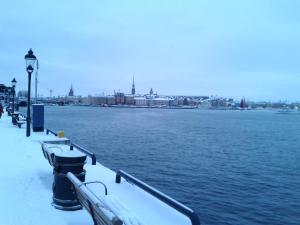 One really has to use one’s time wisely – only one more week left and I’ll be leaving Sweden. I always try not to think about it, but it’s impossible. I feel like I’m on a time pressure now: I want to do as much as possible before I leave, but the time is simply slipping away. Still, I’m postponing the thought about leaving for some other time (Basically along the lines of “I can’t think about that right now.  I’ll think about that tomorrow”).

This entry was posted on Saturday, December 15th, 2012 at 5:27 pm and is filed under Fall 2012, Indira in Sweden. You can follow any responses to this entry through the RSS 2.0 feed. You can leave a response, or trackback from your own site.