After a very eventful Thanksgiving I thought it would be impossible to have a better weekend in Oxford. I was wrong.  Even though the British do not enjoy Black Friday, they do know how to have light festivals.  The morning after Thanksgiving I woke up and attended a Health and Disease tutorial.  Our director of studies told me to attend the evening’s light festival. This was bold advice considering our college was hosting Olympic gold medalist Andrew Triggs Hodge at our formal dinner that evening. As I walked back from the tutorial I saw that the center of the city, a mile in each direction, was being  blocked off and decorated for the evening’s events.  The Oxford Christmas lighting ceremony, an annual tradition where the tree in the center of the city is lit and children from local schools parade around town, was that night.  Jordan and I were prepared to attend for a few hours before the St. Catherine’s formal ball.  It was the 50th anniversary of the establishment of St. Catz and the festivities would be extravagant. Anyways, that night Jordan and I attended the lighting ceremony before the ball.  Since we live in an apartment in the center of the city, we were able to walk out our door and experience the ceremony.  A large Christmas tree was lit and the rest of the festival was based on the American carnival.  There was a ferris-wheel, merry-go-round, carnival food, games, and thousands of families roaming the streets. The event was incredible.  Jordan and I bought Brazilian cheese-balls before we experienced an a cappella performance by the Oxford all male “Out of the Blue.”  Even though they are English, they rely heavily on American pop culture songs including “California Girls”, “Hit me baby one more time,” and “In the Jungle.”  The performance was brilliant, but we had to leave early in order to prepare for the formal ball. 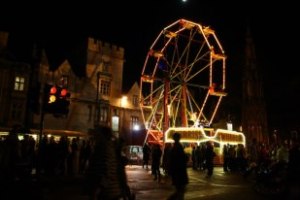 After Jordan and I got ready, we walked to St. Catherine’s in time to see the fireworks show.  I will say that it compared to the 4th of July ceremonies in the states.  After the fireworks display, we headed to the formal ball.  The formal balls at Oxford seem to be a big deal.  All males must wear black bow-ties and a suit and entertain their tutors from the first term.  The night was very interesting.  I will say that it was a different experience seeing my professors in a ‘party’ setting.  All of the tutors attend and get to experience the evening’s festivities.  That night was definitely incredibly memorable. 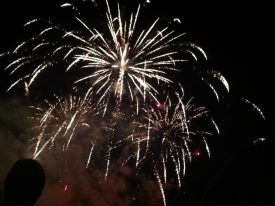 The day after the formal ball, I began to prepare for 8th week. Oxford terms last eight weeks and although it might not seem like a lot, I am ready to take a break.  Every week I have had either 2 essays due or an essay and a 10 minute presentation.  By the 8th week, students are worn out.  That Saturday I set my weekly schedule for my HIV tutorial and my Health Prevention tutorial.  I knew that it would be a long week, but the idea of finishing kept me energized.  Before this year, I had never pulled an all nighter, but in the last 7 days I have been through 3.  Looking at it from the other side, I will say that they were all my fault.  If there is anything that I have learned from my time at Oxford it is that you are the reason for your success or failure.  My nonchalant attitude in the first few days of the week forced me to make up for it in the back end.  With my last tutorial completed I can say that I have successfully completed an Oxford term.  It feels amazing.

I will leave you all now for a few days.  I will take the next segment to prepare my final post for the term.  In that post I will highlight how much I have learned and where I will go in the next two terms.  I have had a wonderful time here and look forward to writing this last post!

This entry was posted on Saturday, December 1st, 2012 at 9:04 pm and is filed under Fall 2012, Jimmy in England. You can follow any responses to this entry through the RSS 2.0 feed. You can leave a response, or trackback from your own site.